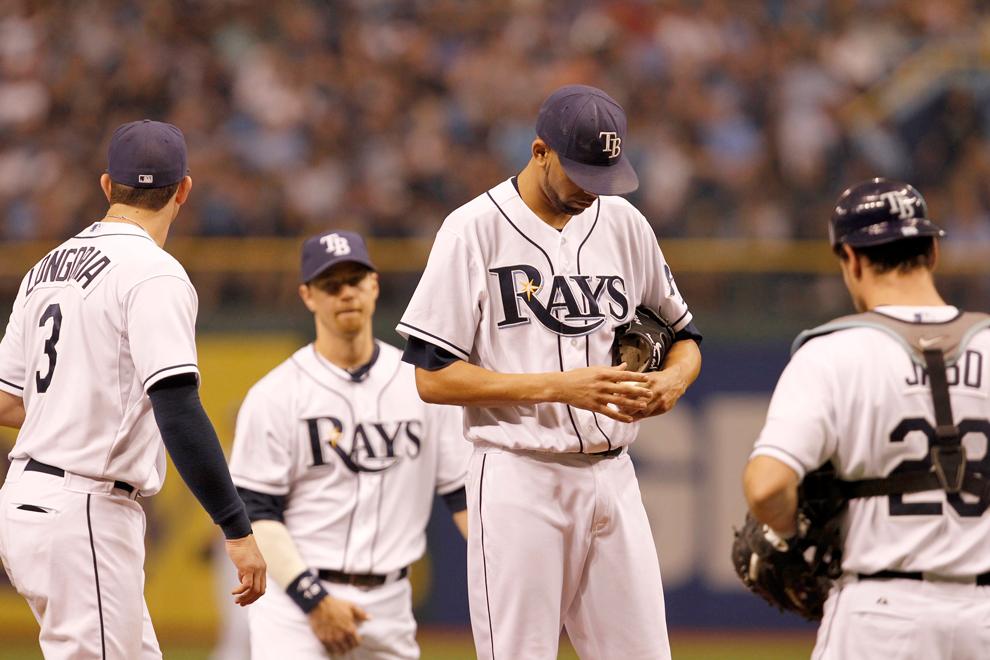 The Rays got into the playoffs in the most amazing way possible, and were eliminated four games later. Courtesy of MCT

The Tampa Bay Rays’ path into the 2011 MLB playoffs was one of the most exciting runs baseball fans ever witnessed. Erasing a nine-game deficit in the standings in less than a month to storm into the postseason, the Rays’ comeback won over haters while breaking the collapsing Red Sox fans’ hearts into pieces.

A marathon of 162 games. A rally for the ages. The biggest storyline of the regular season fulfilled.

But a couple days later, the Rays were gone, eliminated in four games by the Texas Rangers.

Baseball is “America’s game.” What the MLB does, however, makes that description seem a bit anti-patriotic. The league puts teams and their fans through an amount of games that renders regular-season outcomes almost unimportant. Only the last month of it matters.

And after all those countless (because fans don’t care to count that high) nights of three-hour contests, the stakes shoot up astronomically. All of a sudden, teams have a week of life left.

Purists will say the system is fine the way it is. People with more common sense will see the deficiencies of this scheme. Currently, only eight out of 30 teams make the postseason: three division winners plus a wildcard per league.

Thanks to the MLB not having a salary cap, however, one of those playoff spots is practically always reserved for the New York Yankees. Another spot is also usually kept aside for whoever finishes second in the AL East.

Granted, more often than not, the Yankees will choke and win nothing – like this year – but that’s not reason enough to not do something about these playoffs, because it takes too much to get there and too little to be out of them. It’s ridiculous.

According to reports, the MLB has already decided to add an extra wildcard per league to the playoffs. The two wildcards would have a one-game playoff to determine which advances to its league’s division series.

While that’s progress, that’s not enough. Making the playoffs to just be out in one game? This isn’t football. Each team plays 162 times, why must the playoffs be so difficult to get into and so easy to get out of?

Maybe the problem lies in that length: 162 regular-season games? It boggles the mind. What is the need for so many games? The first round of the playoffs is a best-of-five series. They could have at least made it a best-of-seven. Poor Rays.

But the best solution is to just add more teams. The expansion from four to five teams per league is a sign the MLB is heading in the right direction. But they’re still ways from the way it should be: that is, realignment to 15 teams per league and eight playoff teams per league.

The case could be made for six teams making it and giving the top two seeds a bye, like in the NFL, but in a league that makes you play everyday, a week of rest could be disastrous for a team.

If there’s going to be that many games, most of those should matter. Chop the regular season a bit shorter, add an extra round of action.

No one’s going to care about 20 regular-season games less. And the best part is that more teams will get a chance to be in the playoffs. Or are we that selfish that we don’t want to give other cities a chance for glory?

Teams that deserved to be in there but didn’t make it, like the Angels, Giants, Braves and yes, even the Red Sox, will be assured to take part in the postseason.

You shouldn’t have to win 100 games to make it and then be out in a week.

There would be several financial, TV-deal obstacles to overcome before this could even begin to take shape, but it’s the only thing that makes sense when one actually sits down and thinks about it. The NBA has done it and its playoffs are one of the most looked forward to postseasons.

While the Rays’ amazing regular-season knockout of the Red Sox happened in the current 162-game format, such a feat can also be achieved in 140 games. It just wouldn’t have been the Rays doing it. Maybe it would have been the Dodgers and their second-half-of-the-season resurgence doing it to someone else.

Whoever it is, the concept remains: make the season matter more for everyone.