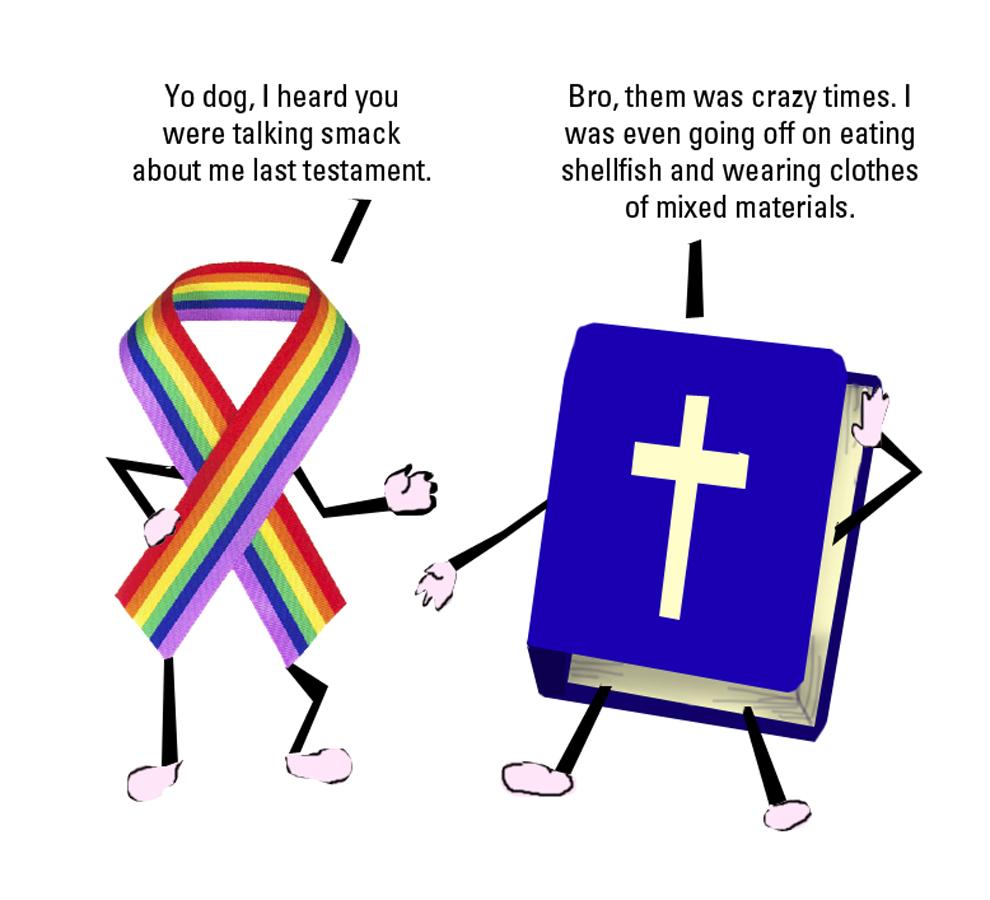 Devoutly religious people of the three major faiths–Christianity, Islam and Judaism–sometimes seem most hateful toward Queer Americans, those who identify as lesbian, gay, bisexual, transgender, intersex or questioning.

For example, statements like, “God made Adam and Eve, not Adam and Steve,” or “God Hates Fags” frequent picket signs at protests staged by religious hate groups such as the Westboro Baptist Church. In certain Muslim theocratic nations like Iran and Saudi Arabia, “homosexual acts” are punishable by death.

However, religions like Christianity and Islam should not be judged by only the radical members with views on sexuality at the polar extreme. Younger religious people are growing in support of lesbian and gay equality more significantly than their parents, according to the Public Religion Research Institute.

Older, more traditional generations may argue that the “millenial” generation, who hum to the tune of Lady GaGa’s “Born This Way” and cheer for Lt. Dan Choi as he continues to break the silence and resists homophobic laws, are just becoming more corrupt.

On the contrary, religious millenials may be accepting of queer people because they are more critical of the patriarchal, heterosexist and homophobic social norms that older generations are used to. In consequence, millenials may be open to the idea that their sacred text–the Bible, the Torah or the Quran–is not against “homosexuality,” and that previous interpretations of these texts are based on projections of social and political homophobic views on sexuality.

The Rev. Dr. Robert Goss, who teaches in the Department of Religious Studies, wrote in an essay called “Homosexuality and the Bible: The Practice of Safe Texts” about how popular understanding of the bible and ancient Jewish customs has been de-contextualized in the modern world.

“When I assert that the Jewish and Christian scriptures say nothing whatsoever about homosexuality as an orientation or modern identity template, it is not an empty mantra,” wrote Goss. “Behind such a statement stands a large body of contemporary literature from cultural and gender studies about the social construction of gender and sexuality, largely ignored by homophobic Christians and scholars.”

Goss, like other scholars who study sexuality and gender, note the significance of the constructs of “homosexuality or heterosexuality” as “modern concepts coined in German psychiatric practice in 1870 to describe emerging modern identities.”

A homophobic interpretation of the bible may have become more widespread when the construct of sexual identity became relevant to social and political life at the turn of the 20th century.

Goss distinguishes between the original languages the bible was written in and the various translations the Bible has been disseminated through.

“The bible speaks neither about sexual orientation nor about sexual identity nor about the modern subjectivities of heterosexuality, homosexuality, bisexuality, and transgendered identity,” said Goss. “These identities are absent from the biblical worldview.”

Goss explains how dangerous misinterpreting and de-contextualizing ancient text can be for Queer people.

“There are seven texts used or rather misused as texts of terror, as weapons against translesbigay people,” he said. “The issue behind these biblical texts traditionally applied to homosexuality does not concern same-sex behaviors but deals with phallic violence and gender transgressions.”

Those seven texts include passages from Leviticus, Genesis, Judges, 1 Corinthians, 1 Timothy and Romans. One story in particular occurs in the Bible, Torah and Quran and is possibly the most referred passage that heterosexist and homophobic religious people in the major three religions use to demoralize Queer people–the story of Sodom and Gomorrah.

There are small differences between the Quranic version of the story and the Judeo-Christian version, but the main events of the story agree: Lot, a pious and God-fearing prophet, tries to warn the wretched people in the cities of Sodom and Gomorrah that unless they change, God would punish them. The people do not listen or repent, but God sends two angels disguised as handsome men there to scope out the city before finally destroying it, and they end up at Lot’s house.

All the men of the city crowd around Lot’s house and demand that Lot hand over the strangers, so that they could force sex acts on his guests. Lot refused to do so, even offering the crowd his daughters. But when the crowd did not change their minds, the angels told him to take his family and flee the city so that they could destroy it.

In the King James Bible, the crowd demands Lot to give up to the foreign men so that they “might know them.” In the New International Version, the crowd says to Lot, “bring them out to us so that we can have sex with them.”

This is significant because the term “to know” in the King James version is a closer translation from the original Hebrew word, “yadha.” Goss writes that yadha is “occasionally used as a euphemism for sexual intercourse” but that in proper context, a better translation would be to “womanize, make into a woman” or to “penetrate a male like a woman.”

The Qu’ran describes the crowd wanting “abominations”, “unnatural crimes” and “lewdness such as no people in creation ever committed before,” but to infer from this that God had problem with sexual intimacy between two members of the same sex is to read the story with a heterosexist and homophobic viewpoint.

The story of Sodom and Gomorrah is not a testament to the evils of same-sex acts, but is a story of how God punished a city where men violently raped strangers and women were treated as objects to be violated at a whim.

It is ridiculous that a patriarchal, heterosexist and homophobic reading of this story results in moral disgust at the idea of same-sex acts, but that Lot offered his own daughters as sacrificial lambs does not present as equally morally disgusting and horrifying.