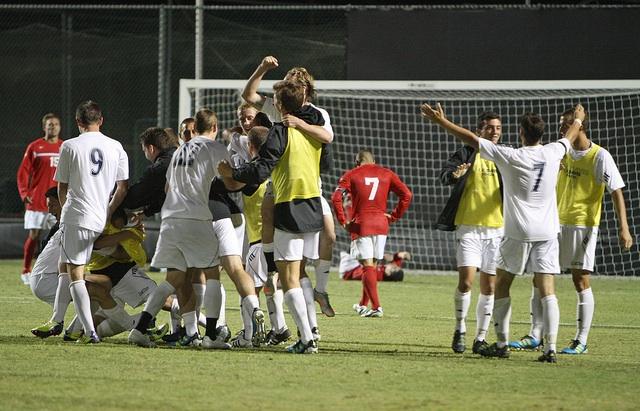 Miscommunications and turnovers cost CSUN an opportunity to move up in the Big West Conference standings as the Matadors lost to UC Davis 2-1 in overtime at Matador Soccer Field Saturday night.

It was Aggie forward Matt Sheldon who took advantage of CSUN’s lack of communication, scoring two goals, including the game-winner in the 94th minute. Matador defenders left Sheldon unmarked and gave him an open look at the net to end the match.

“Two mental breakdowns cost us the game,” CSUN midfielder Rafael Garcia said. “(For) the first goal, I turned the ball over. I’m not known for making mistakes, but that mistake cost us. I’m only human.”

Sheldon, who entering the game had yet to score this season, put his team up 1-0 in the 72nd minute off a turnover by CSUN (6-6-1, 3-2 Big West). Sheldon kicked the ball and hit a Matador defender — in similar fashion to a score that occurred during CSUN’s loss to UC Irvine Oct. 8. The ball had lots of spin on it and Northridge goalkeeper Michael Abalos could not save it in time.

The loss puts CSUN in a three-way tie with the Aggies (5-6-2, 3-2) and Cal Poly for second place in the Big West. The Matadors split the season series 1-1 with UC Davis, with both teams winning on the road.

“I felt like we were going to (win) it, but everything fell apart in overtime,” CSUN forward Edwin Rivas said. “We were supposed to beat this team, beat them twice, and get on the road (against UC Riverside Wednesday) and get another win so we can stay on top. But it didn’t work that way.”

CSUN scored seven minutes after Sheldon’s first goal. Rivas got the equalizer in the 79th minute with assists from Garcia and midfielder Rene Anguiano. Garcia took a corner kick to find Anguiano, who found Rivas on the left side of the box. He netted the ball to the right side of the goal.

“We took 20 shots. They didn’t go in,” Davila said. “We had two (penalty kicks at UC Davis) last time. The match was rough and that’s their style. The referee let them beat at us a little bit. That’s the game, man. That’s the game.”

Davila added that the referee called the game consistently, something his team had to adapt to on top of Davis’s physical play.

Aggies and Matadors both had offense on their minds. CSUN point leader, midfielder Thomas Ramos had one goal nearly go in in the 20th minute. Ramos ran the ball up the right side of the field and tried his luck with a shot from about 25 yards, but the bend on his kick caused his shot to hit the right post.

Davis also had an opportunity to score in the first half. An Aggie player tried a shot from the left side of the goal box, but Abalos showed his quick reflexes and deflected the shot upwards with one hand, keeping the game scoreless at halftime.

It was a physical match throughout, with Davis playing rough and accumulating 14 fouls and one yellow card. The Aggies had one hard foul in the first half, where a defender sideswiped co-captain Garcia and tackled him down to the ground.

“We took a beating for sure, but we knew what we were walking into,” Garcia said. “They’re a very physical team. That’s their style and we can’t do anything about it.”