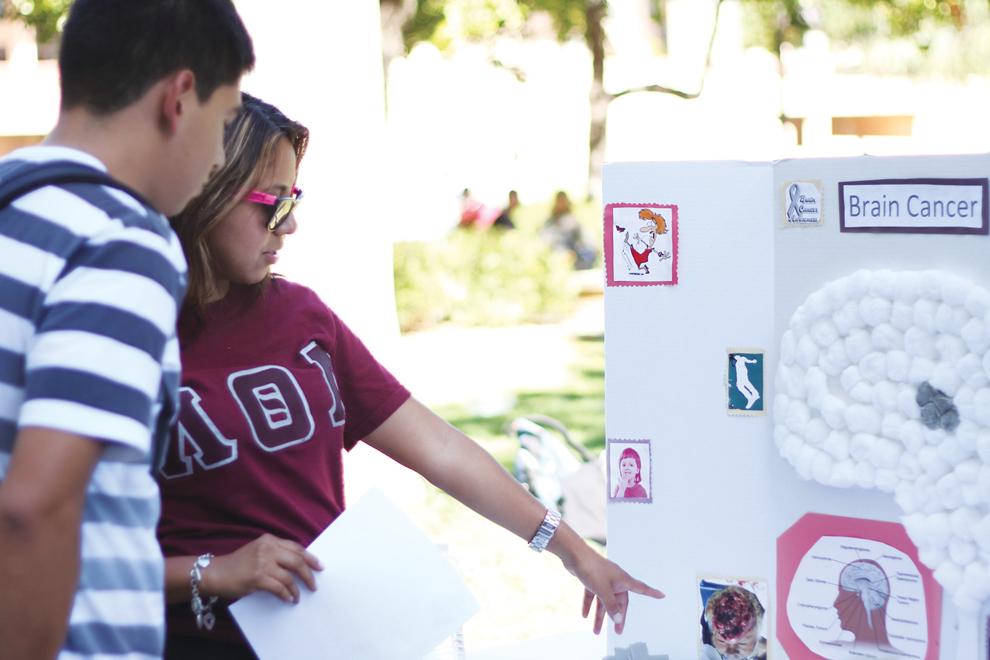 Jennifer Yessi of the Lambda Theta Alpha Sorority talks to a student about brain cancer and tumors during the Greeks Against Cancer event. Simon Gambaryan / Daily Sundial

The United Sororities and Fraternities Council (USFC) hosted “Greeks Against Cancer” to promote awareness on campus of all types of cancers Monday, Tuesday and Wednesday.

Marielos Renderos, president of USFC, came up with the idea for this event last year, after her mother was diagnosed with uterine carcinosarcoma, an extremely rare type of cancer that affects one in 750,000 women.

After her mother was diagnosed, Renderos , a senior pre-med student threw herself into taking charge of her mother’s care by managing her medications, asking questions and ensuring her mom the best level of comfort as possible during treatment.  After two rounds of chemo-therapy, the disease claimed her life this past March.

“My other thoughts were on the rest of my peers—how would they know what to do?” Renderos said.

The 15 Greek organizations that make up the USFC tabled information about an array of cancers and sold art pieces for donation that were created to honor those that have fought and continue to fight the disease, on Sierra Walk.

“My expectation is that for everyone to have learned something about cancer and to hopefully advise other people on how to prevent it,” Renderos said.

Renderos, who calls herself a save the humans activist, said the main mission was to promote awareness within the campus community.

“I haven’t taken care of myself lately because it’s a scary thought,” she said.  “I’m taking a more active role.  Now that I see it, it’s important for younger generations to go out and get checked out.  If you have any history of cancer, heart disease, diabetes, we should all get checked out.”

Stephanie Cortes, a sophomore health science major, was one of the volunteers during the art walk and talked to students about breast cancer.

“There’s probably students suffering right here on campus,” said Cortes, whose own grandmother had passed away from breast cancer.

“Now that we’re in college, we’re young adults and we’re out there with a lot more connections to communicate.  We need to promote action,” he said.

Greeks Against Cancer culminated with a balloon release vigil at the Plaza Del Sol and guest speaker Dr. Steven Oppenheimer at the Grand Salon, Wednesday.

“We’re not going to let go of that hope, we’re going to share it with the rest of the world,” said Augie Garibay, activities coordinator for clubs and organizations at the Matador Involvement Center, as he began the balloon release vigil with a few words to inspire students of who have lost a loved one from cancer.  Attendees stood in a moment of silence before releasing dozens of white balloons into the night sky.

Oppenheimer, CSUN biology professor, lectured students on the many facets of cancer.

“If you can detect the cancer before it has spread around the body, you often can cure it,” said Oppenheimer.  “It’s not a death sentence.”

During his presentation, Oppenheimer described the causes of cancer, and displayed a slide during his presentation that included the American Cancer Society acronym CAUTION to help remind students when to see a doctor.  CAUTION stands for changes in the bowel or the bladder, a sore that does not heal, unusual bleeding or discharge, thickening or lumps in the breast or elsewhere, indigestion or difficulty swallowing, obvious changes in warts or moles and nagging cough or hoarseness.

“Very little has gone into the field of cancer prevention.  If they did that, we’d see better results than we have in 40 years,” said Oppenheimer.

Renderos’s experience was a key example of what Oppenheimer described.

“It takes, at some hospitals, over 20 hours to get checked out.  It only takes a matter of seconds to get car insurance.  Why is it more important than taking care of your health?  It’s a little sad,” said Renderos.

“Most of the cancer patients in my mother’s hospital were all from minorities who had failed to get their check-ups done on time because they didn’t qualify for health insurance, or could not afford to get them done on their own, or didn’t know where to get them done,” Renderos said.  “Community and free clinics should promote their resources a lot more.  We are in charge of our health to a certain extent.  That’s what they’re there for,” said Renderos.

Oppenheimer agreed, “that is criminal in this country—that people don’t get treatment for cancer until it’s too late.”