New tax plan not the answer to nation’s problems 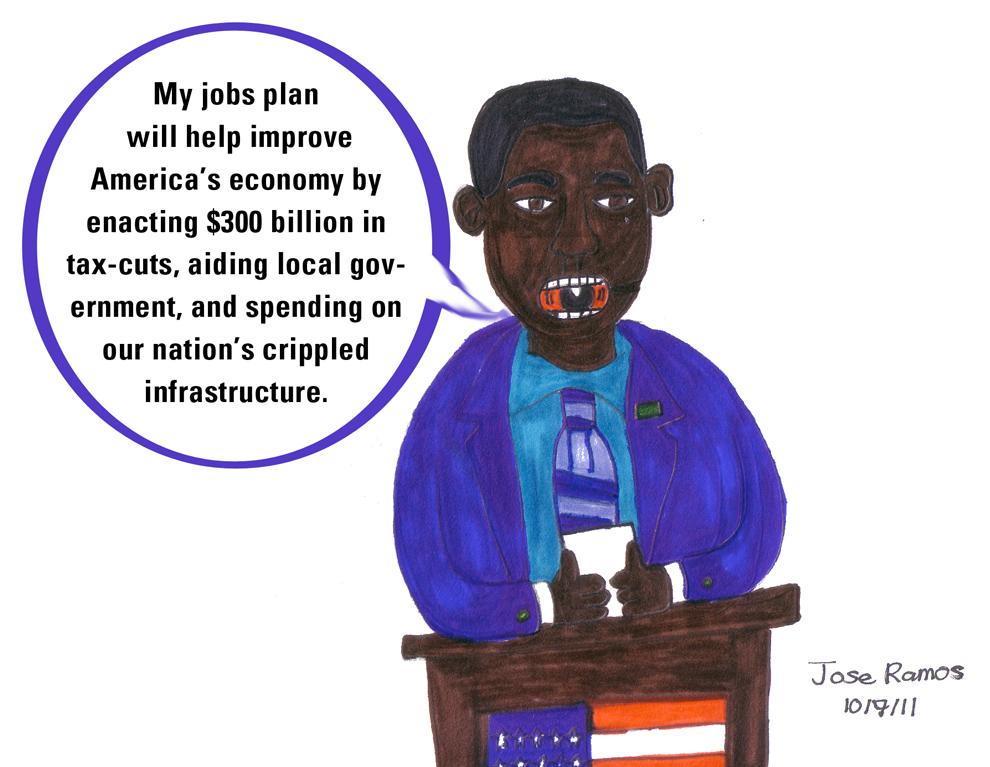 Working its way through the lower intestines of our legislative system is a new bill that will force the highest earners in America to pay higher taxes.

Many are calling this new plan “the buffet plan,” as President Barack Obama has joined forces with billionaire Warren Buffet in an attempt to make light of the fact that the super rich are enjoying tax breaks while working-class citizens are fighting to make ends meet.

Obama has found the change he promised is harder than previously expected, especially with a Republican-stacked House of Representatives and some media platforms that will fight him around every bend.

Regardless of Obama’s problems with checks and balances, I can’t think of anything more fair and democratic than a tax plan where citizens pay to their ability.

The real issue is not Obama or his tax plan.  It is the constant battle between political parties that has plagued our country since the beginning.

We live in a representative democracy where citizens vote in people to represent them, govern them and create laws that benefit them. But reality is, the politicians who collect the most money to run for office will generally win. This creates a system where politicians are indebted to those who put them in place, not to the citizens who voted for them.

Do Americans think special interest groups, lobbyists and the rich will allow their politicians to pass a law that will pull money from their pockets? I don’t think so.

“Obama’s plan is more a political gesture than an actual policy, since he doesn’t have the votes in Congress to pass it, so it’s hard to say what exactly he’s up to — other than trying to get re-elected,” history professor Thomas Devine wrote in an email.

Former President Franklin Roosevelt did much the same thing during the Great Depression, Devine said.

Former President Bill Clinton tried to do something similar in the 90’s, and the rich countered by changing their methods and constricting the way they operated, Krol said.

“It’s silly to pick out just one or two things. I would greatly simplify (the tax code) to the lowest possible tax rate, higher the tax base, get rid of the crazy exemptions,” Krol said.  “The goal is to raise revenue and promote growth. (The tax code) is a monstrosity.”

If there’s anything that the American people should have learned from the bailout of 2008, it’s that rich capitalist businessmen will always take their money.

Dan Ariely of Duke University’s psychology department and Michael Norton of Harvard’s school of business conducted a study called “Building A Better America – One Wealth Quintile At A Time” in 2005, in which they randomly selected over 5,000 people from all denominations, political affiliations and wealth quintiles, and asked them their opinion on the the wealth distribution in America.

In the study, they were given unlabeled pie charts and asked which one they thought represented America, and which was most justly appropriated. Ninety-two percent of Americans said they preferred the unmarked pie chart that represented the wealth distribution in Sweden, where the top 20 percent own 36 percent of the wealth.

In 2005, the top quintile controlled 80 percent of the wealth in America. If this is class warfare, as Speaker of the House John Boehner has called it, then it looks as though the American people are losing.

The survey asked, “How much should the distribution of wealth be for the top percentile?”

The average answer called for the wealthiest Americans to own 32 percent of the wealth, a far cry from the 84 percent that they actually own.

“What they really want, even if they don’t know it, is to live in a wealthier state like Sweden or something close to it,” Wallis said.

So why do Americans, especially those in the lowest quintiles, not advocate for a redistribution of wealth?

It could be the highest earners own many of the media outlets in America and tactically mold Americans into trusting peons who are too busy working and chasing the American dream which, just a few generations ago, used to be a reality.

Whatever the reason, this tax plan isn’t the solution.