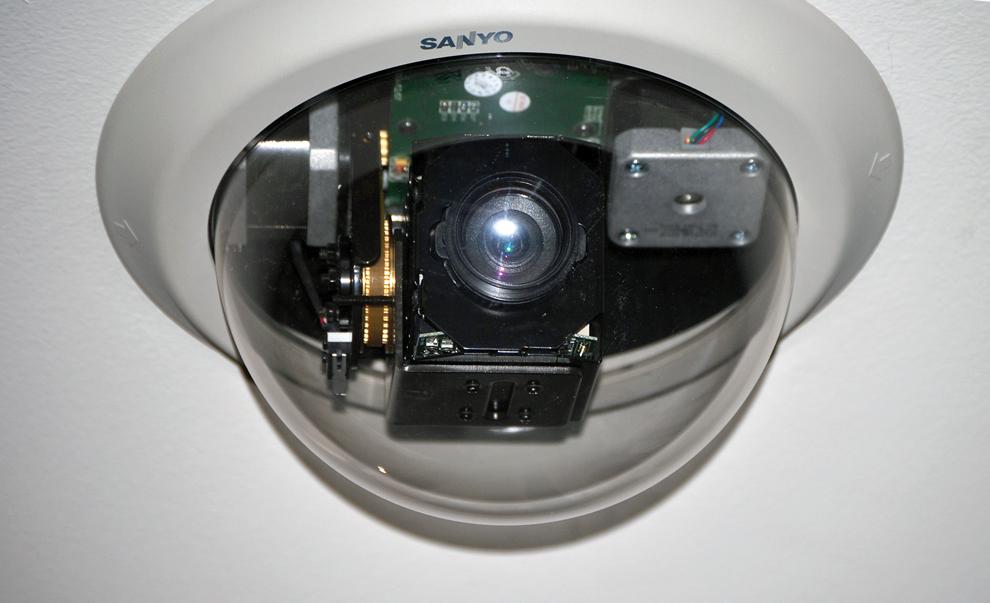 One of the security cameras in the Oviatt library lobby. Photo Credit: Andres Aguila / Daily Sundial

Surveillance cameras installed throughout the university are used mainly to deter crime and theft, according to multiple sources on campus.

The Oviatt Library and the University Student Union (USU) both have numerous cameras installed, but it is unclear whether the rest of the university is similarly watched.

When asked if there were any known surveillance cameras installed in university buildings, CSUN spokeswoman Carmen Ramos Chandler said she could not recall ever seeing a permanent camera installed on campus.

The surveillance camera used to catch the CSUN professor accused of urinating on a colleagues door last semester was temporary, installed after suspicion about a potential culprit increased, Chandler said. It was taken down after law enforcement had the footage they needed.

USU has the most surveillance cameras on campus, with approximately 40 installed throughout the facility, said Jason Wang, associate executive director.

“We put cameras up initially to deter theft, damage, and vandalism,” Wang said. “We want (the USU) to be safe, (for) people to feel safe, so we think having a sign out that says you’re under surveillance might help people make better choices.”

Signs are not required to tell people they are in the presence of surveillance cameras, however, if those cameras are installed in a public area, said Melanie Williams, business law department chair.

“You have no expectation of privacy normally if you’re in a normal public place,” Williams said. “There would be no particular limitations that apply to a public institution or an educational institution that wouldn’t apply to any other institution or place of business.”

Although signs are not required, Wang said the USU created its own guidelines, including signs near entrances that tell visitors the area is subject to video recording, and recorded video will be kept for 14 days.

“We consulted with an attorney and our legal counsel for the student union, and decided it was the best practice,” he said.

The Oviatt Library, which has approximately 30 cameras installed, has similar guidelines to the USU with the exception of having signs, said Marianne Afifi, library associate dean.

“We do not believe that we need to tell students,” she said. “However, we are not hiding the fact that they are there. Anyone who looks up can see them.”

Like the USU, the cameras installed in the Oviatt are used to prevent crime and the safety of its employees, Afifi said.

They’re used “to ensure the protection of state property in the event of theft and for the security of our users and employees,” she said.

When asked about the cost of the cameras, both Wang and Afifi had rough estimates.

Wang had no figures for the cost of cameras in the USU, but provided the costs for the cameras being installed in the new student recreation center.

Afifi provided no figures for the cost of the cameras in the Oviatt, but explained the cost fluctuates.

“We have a service contract and that varies by how often the company has to come out and service the system,” she said.

Provided the surveillance cameras being installed in the new student recreation center cost more than $100,000, it would be difficult to determine how much it would cost the entire university to install cameras on every building on campus.

“That would be enormously costly at a place like this,” Williams said. “I can’t imagine that (surveillance cameras) would be worth the money being spent.”