W-Vball: Despite being a freshman, Hinger isn’t afraid to show her competitive side 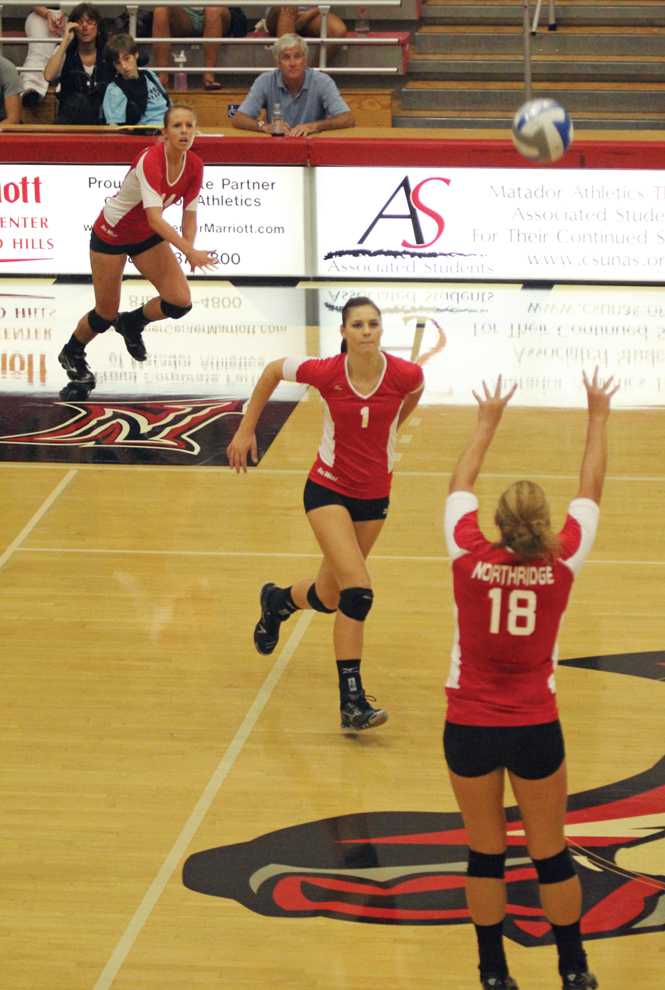 Whether the Matadors need a clutch kill or a skilled vocalist for karaoke night, Casey Hinger is your go-to person, CSUN head coach Jeff Stork said.

“She was the lead singer for her high school play,” Stork said of her freshman middle blocker. “That takes a confident person. All that stuff overflows in what she does on the volleyball court.”

The assertive Hinger will take the brutal smack of a volleyball over the microphone, though.

“I love when you get that kill and it hits someone that just happens to be in the way,” Hinger said. “Like that game-point kill. That’s my favorite part, like just to be able to ‘boom’ put it down.”

Whether it’s singing or volleyball, or even soccer – a sport the freshman practiced while at Valencia (Placentia) High School, Hinger is one of the most arduous competitors in the Matador locker room. In just her first year at CSUN, she’s the team’s second leading kill-getter at 2.40 per set.

Named her high school’s league MVP and All-CIF First team member last year, Hinger came into the program ready to play right away. She’s started all but one of the Matadors’ 19 games and leads them in blocks (66).

CSUN scouted her for two years and saw her play four different positions: middle blocker, outside and opposite hitter and setter. According to Stork, the team didn’t know where to put her at first.

That’s not necessarily a bad thing.

“In some ways, (Hinger)’s actually untapped right now,” Stork said. “The team is learning about her and what her capabilities are. We’re just now starting to develop some little wrinkles in what she’s able to do. Her versatility is unbelievable.”

Hinger didn’t even touch a volleyball until she began playing at Valencia. A six-foot freshman then, Hinger felt accomplished with any small contribution she provided.

“I didn’t think I was good,” Hinger recalled. “I would get one random good kill and I was like ‘Whoa.’”

Hinger’s father, Randy, wasn’t as impressed as she was then.

“My dad would always tells me, ‘When you’re older, you’re going to hit all the balls like that.’”

She played a large role in giving the Matadors their biggest win of the season Oct. 1 against Cal State Fullerton. Hinger, coming off a 15-kill performance a night before against Long Beach State, pounded down 14 kills as CSUN swept the defending Big West champs.

With Hinger being from Fullerton, one might have thought she would have circled the date the Titans visited the Matadome. Not the case for the middle blocker, though, who never even entertained the thought of playing for her hometown college.

“Too close to home,” Hinger said. “I was never really interested in that.”

Hinger wanted to find a school “near home, but far away enough at the same time,” and the Matadors fit the bill perfectly.

She credited the family-like coaching staff and “gorgeous campus” as the main allure to come to CSUN. She felt Northridge was “where I belonged,” a place to continue competing for championships.

“I’m sure you’ve noticed I’m extremely competitive,” Hinger said. “So I wanted to be somewhere where I could thrive and my team could thrive.”

Though the Matadors (9-10, 3-4 Big West) aren’t exactly thriving and are 2 ½ games behind league leader Long Beach State, Hinger’s confidence seems indomitable. Whether CSUN’s coming off a huge victory against the defending champion or a rough road loss, Hinger always feels a win coming in the next match.

“I’m not afraid to tell the newspaper, tell the world that we’re CSUN, we’re here and we’re good. I’m very outgoing and you might have a hard time shutting me up, sorry,” Hinger said laughing.

No apologies needed. Whether it’s in volleyball or singing, the Matadors probably want her to keep on making noise.