Safety stressed for students walking off campus at night 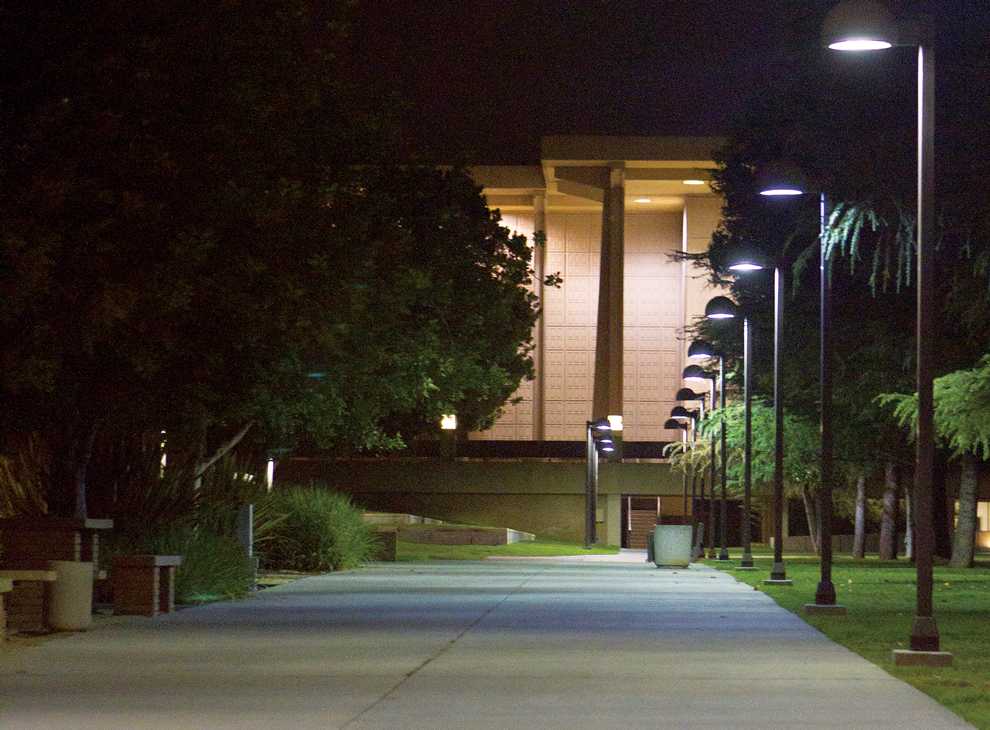 When walking to her car a block and a half away from campus at night, Angela Igrisan, public administration graduate student, fears she will be taken by surprise if someone were to attack her.

Igrisan said she is always aware and makes sure to look at the people around her and take note of their height and speed of walk.

“If I was attacked I would first look at the person to get a description and then run,” said Igrisan.

According to the LAPD crime mapping, since Aug. 29 until Oct. 17, there have been 64 crimes that have occurred within a mile radius of campus.

While walking on or off campus at night, Christina Villalobos, CSUN public information officer, suggests students not to talk on their cell phones, listen to music through headphones and not to walk in dark or unfamiliar areas.

“Sometimes when you get involved in a conversation you may start to tune out things and not be aware of your surroundings,” Villalobos said.

Sgt. Jose Torres of the Devonshire community relations department said to have your “head on a swivel,” meaning look around and be aware of your surroundings.

Megan Kuss, 26, public administration major, lives a few blocks away from campus and walks home by herself at night.

Kuss said she doesn’t have any fears walking home in the dark but makes sure she doesn’t look as if she is “wandering.”

“The streets aren’t well lit, but I take the same path home every night and know my neighborhood is safe,” she said.

According to CSUN police records, there have been no recent reports of crimes against pedestrians on or around campus reported to the on-campus police enforcement.

Villalobos said when an attack, sexual assault or robbery does happen on or around campus, CSUN police department puts out a crime alert bulletin.

In 2009, a suspect would approach women on and around campus while walking, grabbing their breasts, genitals, and buttocks trying to kiss and hug them, reported from the crime alert bulletins.

Another report in the bulletin described a CSUN student was approached and was struck in her upper back by an unknown suspect in Oct. 2009 when walking off campus. After screaming for help, another CSUN student came out of their home to help the victim, while the suspect fled.

Also reported in the crime alert bulletins, later that year, a victim was robbed and assaulted by an unknown suspect on Lindley Ave., south of Lassen St. at around 12 p.m.

All CSAs carry pepper spray, a flashlight and a radio that is linked to CSUN police dispatch, said Villasenor.

When students are being escorted, CSAs will talk about safety procedures, if they are asked or have nothing to talk about, she added.

“If you do not feel comfortable, it is generally an indication that something is not right,” said Sgt. Torres. “If it doesn’t feel right, immediately move towards safety.”

It is a good idea to install extra lighting motion censors in living spaces, said Torres. Especially come day light savings when it gets pitch dark by 5 p.m.

“Most victims interviewed have put themselves in position for open prey and get taken advantage of,” said Torres.

CSUN PD will be conducting a pepper spray workshop Nov.16 that will cost $6. It will include a canister of pepper spray and a lesson on learning the effects and how to use it.