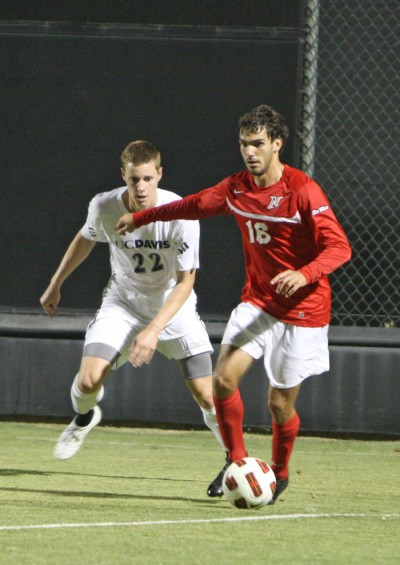 Even though the CSUN men’s soccer team lost to UC Riverside last season for the first time ever in Big West Conference play, the Matadors (6-6-1, 3-2 Big West) aren’t thinking about avenging their defeat as they travel to UCR Soccer Stadium Wednesday night to take on the Highlanders (6-5-2, 1-3-1).

“No one cares about what happened last year,” Matador head coach Terry Davila said, talking about the 2-1 overtime loss a year ago. “All I care about is what’s going to happen on the field (tonight).”

With only five games left in Big West play, Davila understands that every game is crucial. CSUN is tied for second place in the league standings with Cal Poly and UC Davis  and trail first-place UC Irvine by one game.

UCR is currently in sixth place, coming off a 1-1 tie against Cal State Fullerton Saturday night. Before their tie, the Highlanders were on a three-game losing streak, with losses against Cal Poly (5-0) and UC Irvine (5-1). Riverside’s only Big West win came against UC Santa Barbara on Sept. 28.

Highlander forward Cesar Diaz Pizarra currently leads his team with six goals and two assists. The senior averages three shots per game, with a shot on goal ratio of 50 percent (19 on goal, 38 shots).

The Matadors always have a game plan when it plays an opponent, CSUN assistant Peter Bomar said, but executing those game plans in the Big West have been difficult for the team.

“(We need to) maintain our focus and realize that we have a game plan,” co-captain and defender Joe Franco said. “And if we execute it and play to the best of our abilities, then no one can beat us.”

The mistakes the Matadors made in Saturday’s overtime loss against UC Davis have Franco frustrated about the loss.

“We beat San Luis Obispo at their place,” he said. “It’s pretty ridiculous to lose to Davis here. We know what we have to do to come out and get a victory.”

CSUN midfielder Thomas Ramos feels the same way about the team’s execution of its tactics.

“We just got to come out and play our game plan and control the midfield, get behind them, and be aggressive,” said Ramos, talking about the team not getting enough offside calls. “I think it’s a bad thing because we weren’t trying to get behind the defense as much as we usually do.”

In a three-way tie for second, Franco believes the team has what it takes to be successful this season.

“You have to think positive,” he said. “The games that we’ve lost were just learning experiences, so we don’t do that again. I think we realized that we want (to win) the most.”

With only six games left in the season, including a non-conference match at UCLA, CSUN is still driven and making adjustments to its game plan.
“I don’t think that we’re slowing down,” Franco said. “I think we’re just fine-tuning. We just need to maintain consistency, be consistent with the way we play, and stay aggressive. I think we’ll be alright.”

The Matadors have a 2-1 Big West record on the road, and UCR will prove to be another test for the team.

“Anytime you go to an away-team’s field, especially one like Riverside where it’s turf, sometimes you get there you don’t have that drive yet,” Bomar said. “So I think we need to really come out and take what Riverside’s going to bring and then hopefully match it, and then surpass and hopefully come back with that (win).”