Weekly Column: Five early NFL surprises with a chance to be great in 2011 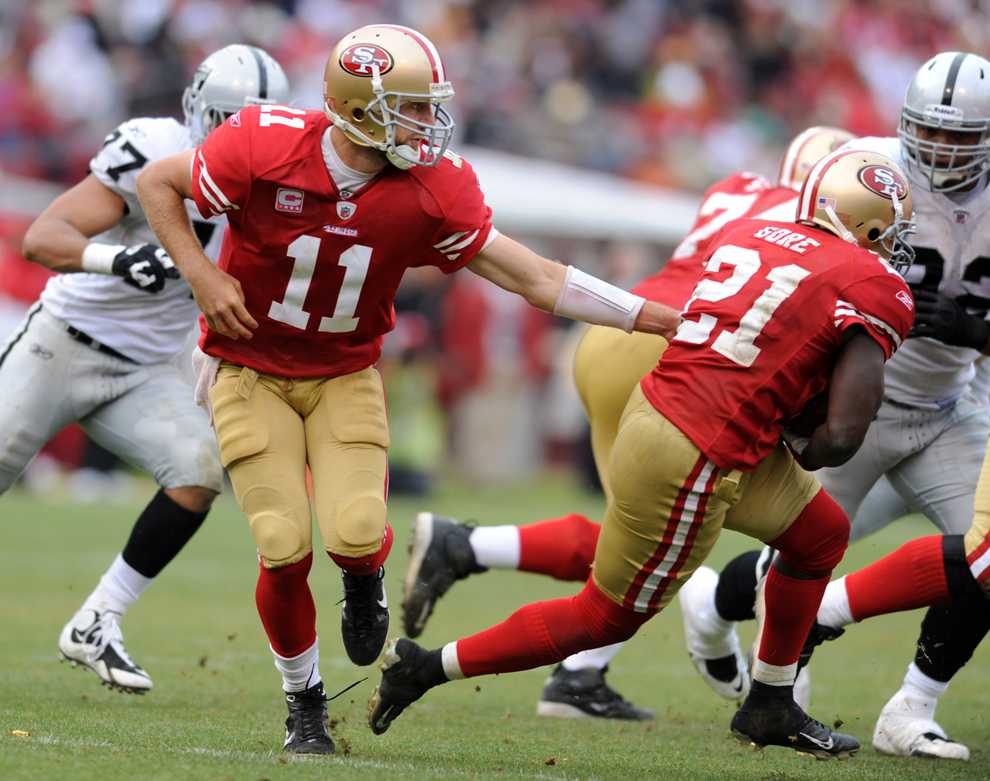 Six weeks into the NFL season, several teams are arising as candidates for this year’s most surprising team. Some for their emergence after years of dreadful play, and some for simply improving and gaining experience.

But are these pleasant surprises legit, or are they going to be the Denver Broncos of two years ago who started 6-0 and ended up missing the playoffs?

San Fransisco 49ers
Sunday’s win against the previously-undefeated Detroit Lions gave the Niners a 5-1 record, their best start since 1998. Led by running back Frank Gore’s 90 yards per game, quarterback Alex Smith’s 8-2 touchdown-to-interception ratio, coach Jim Harbaugh’s feistiness and their second-ranked points-allowed-per-game defense, the Niners have finally found a winning combination, bouncing back from eight consecutive years of having non-winning records.

Last year, they started off at a ghastly 1-6. As if that wasn’t bad enough, then-head coach Mike Singletary promised they’d still make the playoffs, but the Niners finished 6-10 and missed the postseason. With him gone now, his promise will come true.

Buffalo Bills
The 4-2 Bills are the Phoenix Suns of the NFL. The Bills rank 30th in defense but second in offense, because their football philosophy involves only one thing: score. And they really have the tools to get into the endzone. Quarterback Ryan Fitzpatrick is completing 66 percent of his passes, throwing for 1,400 yards, 12 touchdowns and only four interceptions through six games.

The biggest benefactor of Fitzpatrick’s awesome numbers has been his go-to wide receiver Stevie Johnson, who’s hauled in four touchdowns so far. Running back Fred Jackson has ran for 601 yards and four touchdowns, making him the second leading rusher in the league. Last year, the Bills finished a woeful 4-12, but if they want to make the playoffs, they must improve their defense. However, they’ve shown they can hang with the greats as they defeated the Patriots a few weeks ago.

Prediction: Will miss the playoffs

Detroit Lions
The Lions, who were undefeated until Sunday’s loss to the Niners, have been a powerhouse on both offense and defense, defying everyone’s expectations as they had laughably won only eight of their last 48 games coming into this season. Superstar wide receiver Calvin Johnson shattered a record in Week 5, becoming the only receiver ever to grab nine scores in the first five games. While he failed to score against the 49ers, he managed to bring in 113 yards.

Quarterback Matthew Stafford has thrown for 1,700 yards and 15 touchdowns, and the Lions’ defense is ranked seventh in points-per-game allowed (19). Their weakness, however, lies on the ground, as they don’t hand the ball enough to running back Jahvid Best, who gets 65 yard per game on a 4.6 yards-per-carry average. Three years ago, the Lions finished 0-16, but now, a playoff spot is not only a reality, it’s almost a lock.

Oakland Raiders
Ever since their 2002 Super Bowl blunder against the Buccaneers, the Raiders have been awful, winning just 37 out of 128 games coming into this season. However, behind Darren McFadden, the NFL’s leading rusher, the team has managed a 4-2 start even though they don’t have a big-name quarterback. McFadden, who’s averaging 102 yards a game on the ground, has a 5.5 yards-per-carry average and found the end zone four times.

Quarterback Jason Campell, who’s averaged 195 yards per game through Week 6, went down with a collarbone injury that likely has him out for the year. To replace him, the Raiders somehow managed to pry disgruntled quarterback Carson Palmer from the hands of Bengals owner Mike Brown, who previously said he wouldn’t trade him for anything. With Palmer’s veteran leadership and skills, the Raiders have a great chance at keeping their playoff hopes afloat.

Tampa Bay Buccaneers
Behind the guidance of young quarterback Josh Freeman and power runner LeGarrette Blount, the Bucs are currently edging out the Saints for first place in the NFC South. While Freeman may struggle at times to find Mike Williams, his best receiver from last year, he has no problems airing it out to Arrelious Benn, who’s caught two long touchdowns thus far.

Freeman can also simply hand it off to Blount, who’s good for nearly 70 yards a game, but has been plagued by inconsistent play. If Tampa hopes to make the playoffs, it must improve its 25th-ranked defense and find a more efficient way to get the ball to Williams.
Prediction: Will miss the playoffs