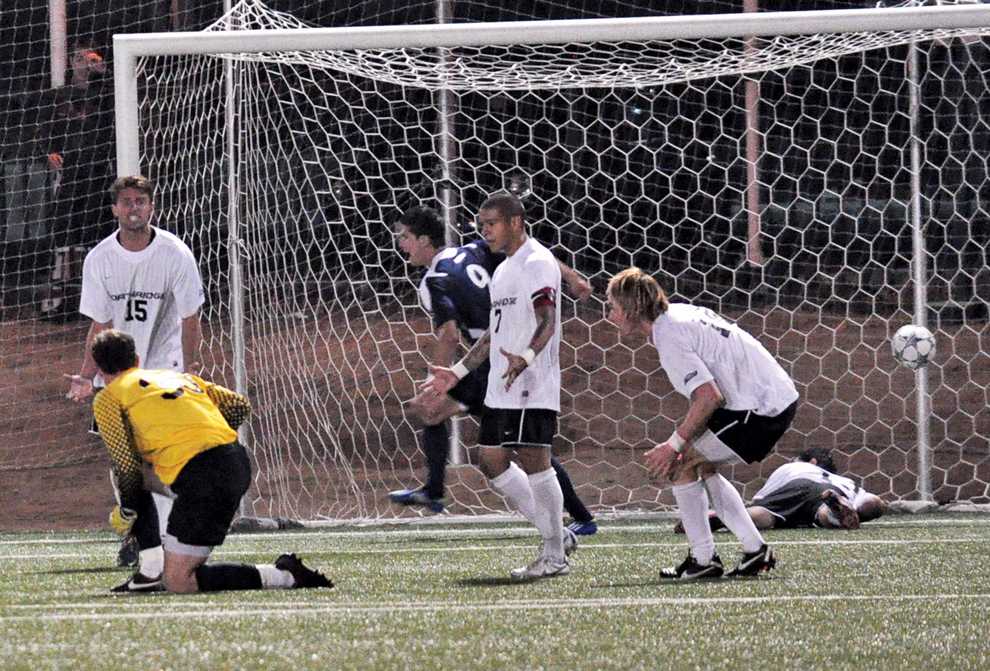 RIVERSIDE — Thomas Ramos’ go-ahead goal in the 86th minute convinced the Matadors the victory was theirs, but the final four minutes was all UC Riverside needed to stage an epic comeback.

“I guess we thought the game was over,” Ramos said after CSUN fell apart against the Highlanders on Wednesday night, losing 2-1 at UCR Soccer Stadium.

UC Riverside forward Hayden Leslie scored the equalizer in the 88th minute and with only 19 seconds left in regulation, Ivan Garcia found the back of the net to hit CSUN with the gut-wrenching defeat.

“There were four minutes left,” Ramos said. “Two minutes later (after UCR’s first goal), Riverside counter-attacked us, had the ball with a wide-open net and put it away. We didn’t clear the ball in the end. It was mistakes that killed us.”

The two goals at the end of the match left Matador goalkeeper Michael Abalos speechless at the sideline.

“When you feel like you’re that close to winning and get just swept out from right underneath you, it’s tough,” said defender and co-captain Joe Franco. “It’s going to be hard but we’re here together as a team and we’re going to work together because we have another game this weekend.”

The artificial turf made it difficult for the Matadors to control possession and made the ball bounce higher than on a real grass pitch.

“Honestly, no one likes playing on turf,” said assistant coach Peter Bomar. “Ideally you want to be playing on real grass, and I won’t say that’s the reason for anything.”

The Matadors came out looking to score early in the match, attempting 12 shots in the first half, but only two shots were on goal. Midfielders Rafael Garcia and Yarden Azulay both came very close to scoring. Co-captain Garcia had an optimal chance to score, with a free kick 20 yards in front of the net. CSUN finished with 31 shots, but only seven on goal.

On the defensive end, CSUN prevented the Highlanders from attempting any shots in the first half, and allowed them to finish with seven.

Fouls were the only statistic UCR (7-5-2, 2-3-1) tallied in the first half with 15 fouls. The Matadors earned 11 fouls, but also received two yellow cards. The first went to forward Edwin Rivas in the 12th minute and to defender Jeremy Hohn in the 19th.

It was more of the same from CSUN in the second half. The team had plenty of shot attempts, but struggled to find a goal. The iron bars were not friendly to Rivas, hitting the left post in the 77th minute.

A small argument between co-captain Garcia and a UCR fan broke out at the end of the match, but the midfielder just shrugged it off when asked about it.

Northridge has a break in their Big West schedule, traveling to Westwood to face UCLA in its last non-conference match of the year. UCLA won 2-1 in last year’s meeting at Matador Soccer Field. UCLA has an overall record of 13-1-3 against CSUN.