M-Soccer: Matadors rally for first win ever at UCLA 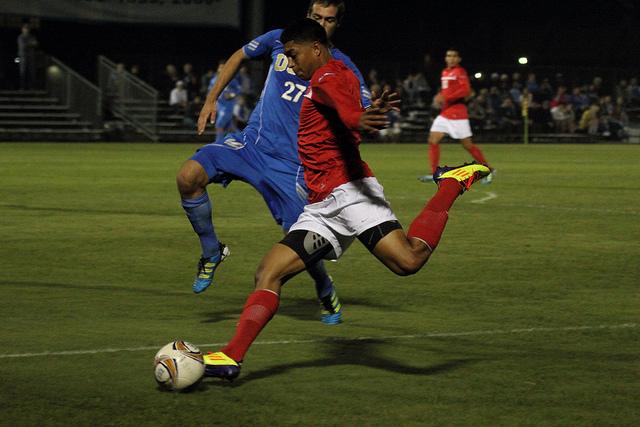 Even though it wasn’t a much-needed Big West victory, it was still a huge confidence booster for the Matadors as they rallied back to defeat No. 7 UCLA, 3-2, for the first time ever at Drake Stadium Saturday night.

“I’ve been looking for that the whole season,” Rivas said. “One-on-one, got him with the left, took a shot, and it went in.”

The game turned around for CSUN (7-7-1, 3-3 Big West) when forward Brian Behrad scored the equalizer in the 83rd minute after the Matadors were down 2-1 for the most part in the second half. Defender and co-captain Joe Franco was able to cross the ball into the box, where Behrad had an open look to the goal.

“Personally it felt great,” Behrad said. “I need to score more and I need to do it more of the team. Putting our team up there against UCLA, it’s fun. It’s really fun.”

The Matadors bounced back from their meltdown loss at UC Riverside Wednesday night where they allowed two goals in the final four minutes of regulation, including the game-winning score with 19 seconds left on the clock.

CSUN goalkeeper Michael Abalos, who gave up two crucial goals against UCR, did not tally a save in the match, but his team’s offense was able to pick up the slack.

“The way we bounced back tonight showed a lot of character,” Abalos said. “Coming here at UCLA, we didn’t let what happened on Wednesday affect us.”

Matador forward Christian Gonzalez Diaz netted the first goal of the match in the 34th minute. Midfielder Thomas Ramos ran the ball up the right side of the box and found Diaz trailing on the side. Ramos gave the ball to Diaz who sent the ball into the back of the net.

Bruin forward Chandler Hoffman has been UCLA’s key to scoring, coming into the match with 11 goals. It was more of the same for Hoffman in the first half.

After Diaz’s goal, it took Hoffman five minutes to find the equalizer in the 39th minute by receiving a through ball from midfielder Fernando Monge into the box.

Hoffman also scored the second goal for UCLA in the 44th minute, putting his team up by one to end the half. A corner kick by midfielder Eder Arreola found teammate Andy Rose in the box, who passed the ball to Hoffman where he found the back of net.

During the first half, UCLA seemed to be taking their time with the ball. The Bruins were making simple touch passes in their half of the pitch, as if they were playing keep away from the Matadors.

“They possessed it very well in the back,” CSUN assistant coach Peter Bomar said. “If you want to keep passing the back on your third of the field, then we’ll let them.”

The tempo in the second half slowed down for both sides. Though UCLA had chances to increase their lead early in the second half, the Bruins picked their shots carefully. Hoffman had a chance to get his hat trick in the 59th minute, with a cross right in front of Abalos, but just missed his opportunity and let the ball roll out of play.

With only four games left on the schedule, CSUN gets back to Big West play on Wednesday for a home match against UC Irvine.