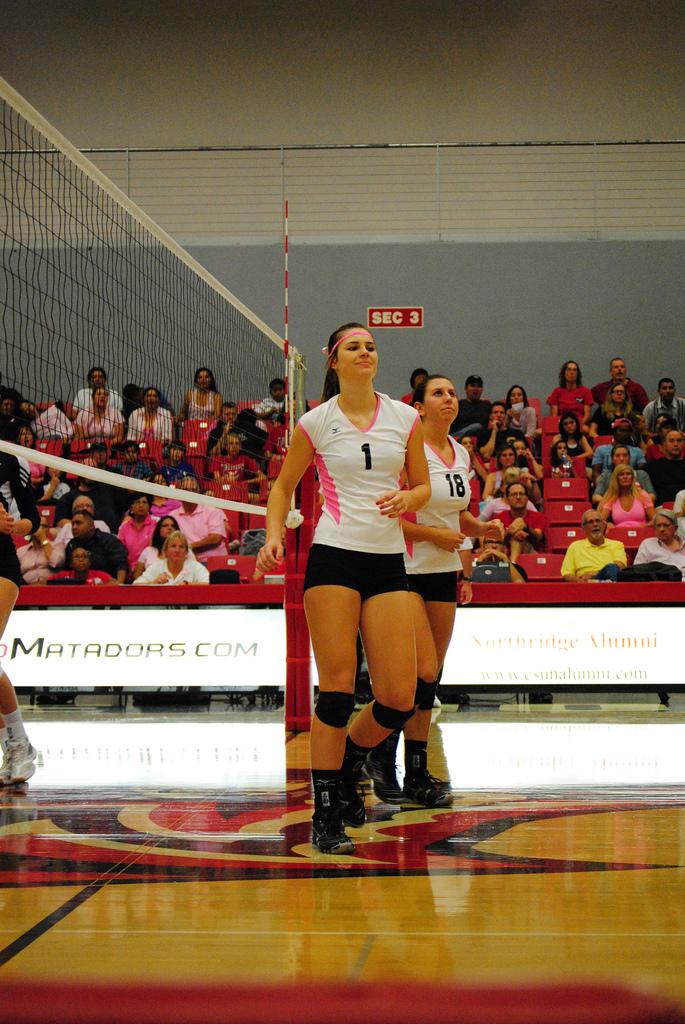 UC Riverside was coming off a tremendous comeback at UC Santa Barbara. Down 2-0, the last-place Highlanders had rallied spiritedly and taken down the second-best team in the Big West Conference record-wise, 3-2, on Oct. 15.

Fast-forward to a week later, Saturday at the Matadome, and there were the Highlanders again falling behind 2-0, this time to CSUN. Following act: another UCR upsurge, two consecutive set wins to force a fifth, deciding frame.

“That was not going to happen to us,” CSUN middle blocker Casey Hinger said. “No way”

Thankfully for the Matadors (10-10, 4-4 Big West), CSUN’s fifth set was as dead set as Hinger’s postgame words. The Matadors had 11 kills in 12 attempts, a staggering .917 hitting percentage, en route to a 15-8 fifth-frame win to finish off the impotent Highlanders, 3-2.

UCR (5-17, 2-6) came into the final set following an impeccable fourth in which it only committed three attack errors and hit .378. The Highlanders also doubled their block totals in that set alone, going from three to six, despite CSUN’s Mahina Haina and Natalie Allen’s 10 combined kills.

The Matadors hit .233 in the set, but the Highlanders’ sizzling hitting was too much as they won the frame 26-24. Momentum was on UCR’s side.

Hinger, who had 13 kills and hit .458 for the game, remained unfazed, however.

“We kind of relaxed a little bit, which is an easy thing to do,” she said. “But once they woke us up, we were like, ‘OK, well now we’re done with you guys. We need to get you down.’”

Haina was the one who transmitted the dismissal message the strongest to UCR. The outside hitter had four kills and a solo block in the frame to push the Matadors to victory and into fifth place in the Big West standings. Haina, who had a team-high 15 kills, was just “doing her job.”

“I just really wanted to get everything done,” Haina said. “We needed the win.”

The match started with both teams looking dead even. The first set was toe-to-toe for most of its duration until the Highlanders went on a spree of mistakes. Tied at 18, CSUN took advantage of six UCR mishaps (four attack errors and two service errors) to go on a 7-2 run and win 25-20. Only a kill by Britney Graff got in the way of the UCR blunder.

UC Riverside, which was led by outside hitters Shelby LeDuff (16 kills) and Amanda Vialpando (15 kills), spread the errors more evenly in the second while the Matadors played nearly flawless volleyball, only committing two attack mistakes. CSUN’s hitting went from a subpar .103 in the first set to more than triple that in the second at .312.

The Matadors won 25-18, taking a 2-0 lead into intermission, making it look like it’d be a short Dig Pink night.

And then, for a second week in a row, UCR got inspired.

“We knew they could do that,” said CSUN setter Sydney Gedryn, who had 47 assists. “We got a little too comfortable, which we shouldn’t have done.”

UCR took a 7-2 lead right off the gate in the third set, forcing CSUN head coach Jeff Stork to call a timeout. CSUN fought back and took an 11-10 lead, but UCR responded and pushed ahead again, causing Stork to call for time once more.

A kill by Natalie Allen (11 kills) got the Matadors within 23-22, but UCR finished them off with two consecutive points to cut into CSUN’s lead. They hit .286 for the frame. The remarkable hitting continued in the fourth as the Highlanders tied the match to set up the do-or-die fifth.

“By the fifth set, we’d just decided as a team, ‘you know, we’re winning this game and there’s nothing else to it,” Gedryn said.

And that was all she wrote. CSUN blasted UCR in the fifth to avoid a colossal collapse and is now on a two-game winning streak.

“When it mattered, we served tough, we blocked well and got some balls to the flow with attacking,” Stork said. “It’s a good night to be a Matador.”