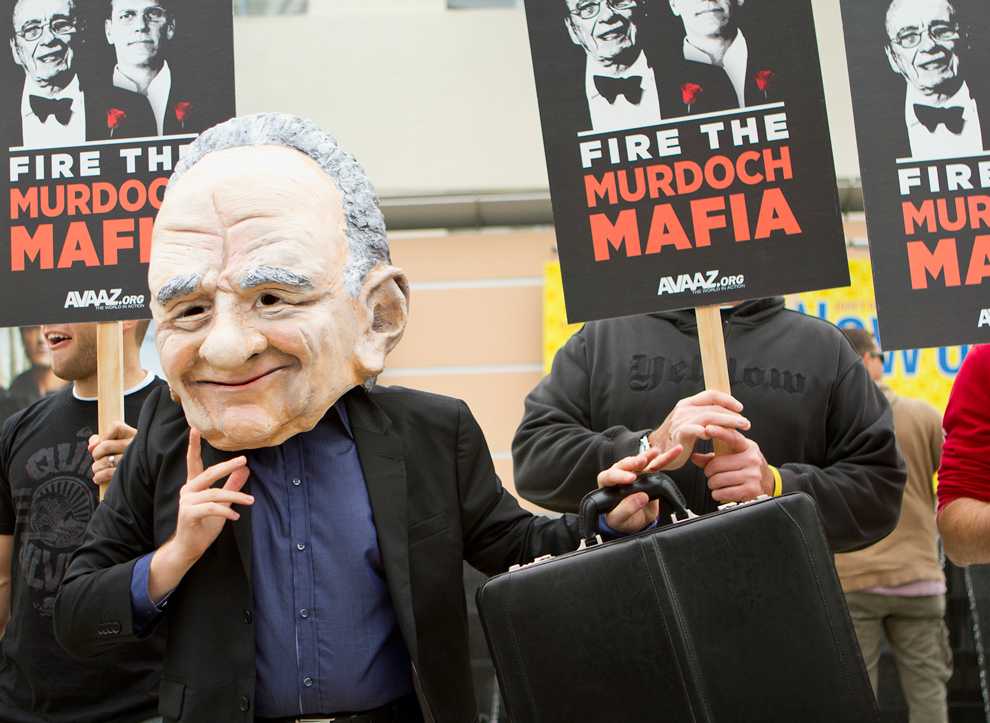 A protestor dons a Rupert Murdoch costume head at the 20th Century Fox protest on Friday, October 21. Protestors are calling for the dismissal of the Murdochs from News Corp. Kat Russell / Daily Sundial

While News Corp. shareholders held their annual meeting inside the 20th Century Fox studio in LA, Friday, protesters rallied outside the studio against the media giant’s mishandling of the phone hacking scandal and calling for the resignations of Rupert and James Murdoch.

British Parliament member and News Corp. shareholder, Tom Watson, who, according to Reuters, has been openly critical of the company, made a brief appearance before heading into the studio, telling reporters that News Corp. is “being run like a dysfunctional family firm.”

The protest concerned many of the same issues that have come to be associated with the Occupy Wall Street movement, with many of the participants carrying signs and chanting the familiar “we are the 99 percent” and “down with corporations, yes to regulations.”

Occupy LA, which arranged to have its participants bused from their Downtown LA encampment, was joined by several other activist groups including Good Jobs LA, Avaaz.org, Commoncause.org and MoveOn.org.

“We’re fighting for a more fair economy,” said Refugio Mata, Good Jobs LA spokesperson. “We see Fox as the symbol for corporate greed and basically corrupting the airwaves, pushing an agenda for Wall Street interests instead of main street interests.”

Brianna Cayo-Cotter, key organizer for Avaaz, traveled from San Francisco to participate in the protest.

“News Corp. has acted in a criminally irresponsible way,” said Cotter. “They have undue influence on our politics, and they are poisoning our democracy.”

Cotter said that she hopes to see the News Corp. shareholders fire the Murdochs and get them off the board immediately and from this point on become a responsible and accountable media organization.

The protest, which started off as a small group of approximately 40 people, was scheduled to run from 9 a.m. to 11 a.m., and steadily grew in size as the morning wore on.

Protesters crowded outside the studio carrying signs with slogans saying “We are the 99 percent,” “Fire the Murdoch Mafia,” and “I’m not your ATM.”

One protester wore a large costume head of Rupert Murdoch and wandered around, much like someone wearing a Disney character costume would, waving and giving people thumbs up and high-fives.