W-Soccer: Matadors embarrassed at home in showdown for first place 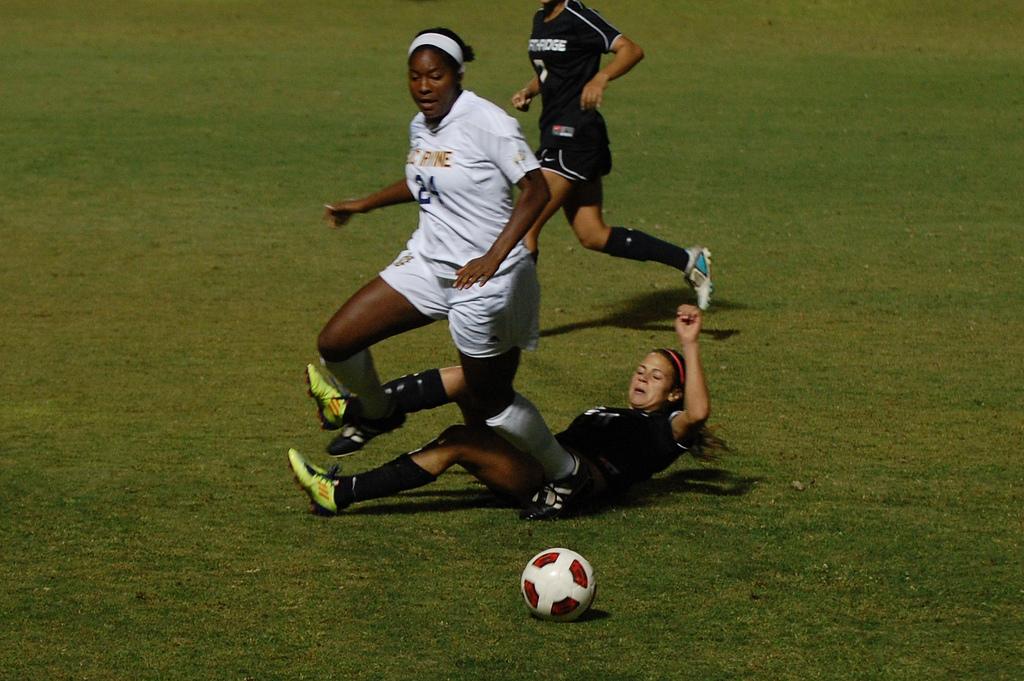 On a night where sole position of first place in the Big West Conference was up for grabs, the CSUN women’s soccer team played its worst game of the season and lost scandalously, 4-0, to UC Irvine Sunday night at Matador Soccer Field.

Sophomore forward Natalia Ledezma scored three of the four goals for No. 21 UC Irvine (12-3-2, 5-1-1).  Her first goal came in the 11th minute after she received a cross from junior midfielder Dana Sanderlin and shot the ball in the corner of the net. The goal was Irvine’s first score in regulation against CSUN since 2007.
Ledezma’s second goal of the game was by far the best of the three. The transfer from UCLA shot the ball from 35 yards out, forcing junior goalkeeper Cynthia Jacobo to back peddle into her own net.
The final goal for Ledezma came in the 76 minute from the left side of the field and into the right corner of the net past the outstretched arms of Jacobo.
The Matadors (6-8-2, 4-2-1) scored an own goal in the second minute of the game after UC Irvine crossed the ball in front of CSUN’s net and junior defender Stephanie Norton cleared the ball into the goal.
For a majority of the game, UC Irvine controlled the tempo and outplayed CSUN.
The Matadors had their best opportunities to score when they made a push at the end of the first half. Junior forward Melissa Fernandez and senior defender Brielle Slepicoff both had one shot on goal with time winding down in the half.
The CSUN offense could not get anything started and had trouble getting the ball past the Anteaters’ back line.
With the loss, the Matadors dropped into a tie with UC Davis for second place in the conference with two games remaining.
CSUN finished the game with only two shots on goal and one corner kick.
The Anteaters finished the game with 13 shots on goal and four corner kicks. The three goals for Ledezma gave her 11 for the season.
Jacobo had six saves and backup goalkeeper junior Haley Hawes had two saves in the final 10 minutes of the game.
It was the worst loss for the Matadors since Texas beat them 5-1 on Sept. 28. This was also the first loss for CSUN in its last four games, snapping a three-game winning streak.
Following the game, players and coaches all walked off the field without doing their usual postgame stretch and team huddle. They did not talk to the media.
Delete Image
Align Left
Align Center
Align Right
Align Left
Align Center
Delete Heading