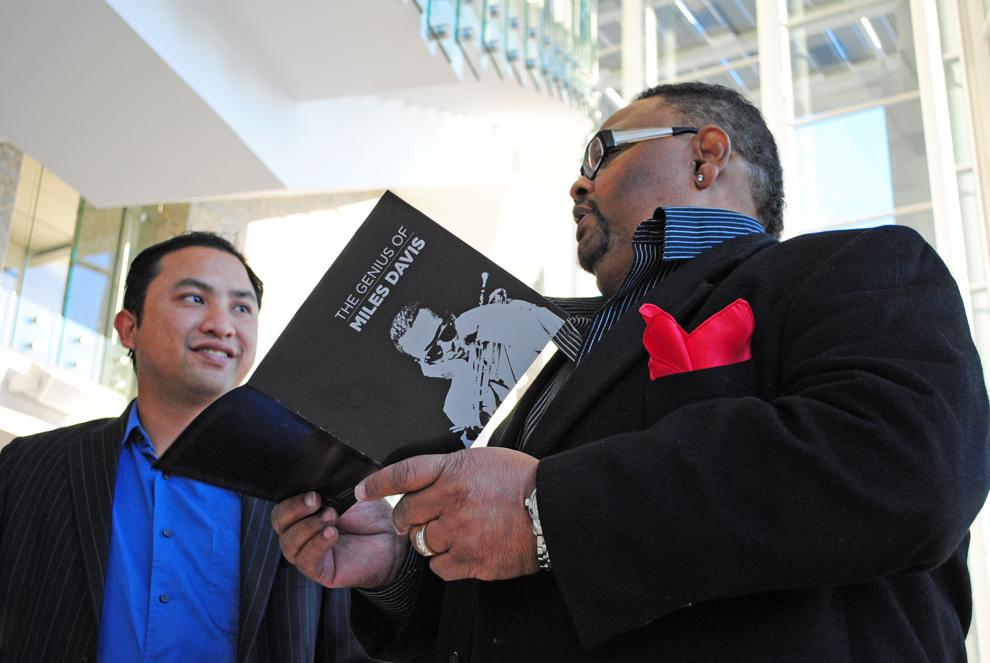 Visitors were able to tour a post-war Los Angeles through an African-American perspective during a celebration of jazz and the opening reception of a photography exhibit Sunday in the VPAC.

The Miles Davis Experience  featured a jazz production by the Ambrose Akinmusire Quintet.  The performance chronicled not only the work of Davis, but the historical context that surrounded the jazz music scene during that decade.

From the poem “Trumpet Player” by Langston Hughes, “The Negro, With the trumpet at his lips, Has dark moons of weariness Beneath his eyes, where the smoldering memory of slave ships Blazed to the crack of whips about thighs,” narrated Donald E. Lacy, Jr. as an image of Miles Davis projected onto three illuminated screens on the backdrop of the stage.

Images of Davis and jazz colleagues including John Coltrane and Billie Holiday continued to flash across the screen as the quintet awakened the late jazz-artist’s spirit. Davis’s own voice resonated throughout the venue as interview clips were transitions between several of the jazz pieces. Quintet members Walter Smith III, Sam Harris, Harish Raghavan, and Justin Brown also crooned their solos as the evening wrapped up with photographs of the East St. Louis riots.

Although the Miles Davis Experience was only showcased for one evening, the Art Gallery’s photo exhibition will be on display until Dec. 10.

Music was not the only way visitors celebrated African American artistic history. Forty years of photography lined the gallery walls like a timeline, allowing viewers to travel from 1940 to 1980, through a world of civil rights protests and backlash, segregation and racism, and a world of mundane beauty often overlooked.

“Identity and Affirmation:  Post War African-American Photography” opened the 125 piece exhibition to the back drop of a live student jazz band.

“It mostly just seems like a documentation, a celebration of the everyday,”  said Danny Escalante, an art graduate student.  “It’s nothing epic, but just being alive and living.”

Gallery attendee Maureen Fitzgerald said she thought civic leaders were an impressive display of early leadership, and the art was compelling.

“Having grown up in the times seeing these leaders, you never forget history, and it’s shocking at times,” Fitzgerald said.  “Seeing the Mason-Dixon Line was appalling, but at the time it was acceptable.”

The exhibition’s curator Kent Kirkton said the exhibit was about community as much as photography.

“The post-war period was a very, very difficult period of time for African Americans in LA and we tend to forget that,” Kirkton said. “The city was quite racist.  Everything had racial-restricted covenants.”

All the images, which were narrowed down from nearly one million archival photographs from the Institute for Arts and Media, were created by African American photographers, and were donated to CSUN over two decades by the artists and their families.