Broncos make the right move going with Tebow as starter 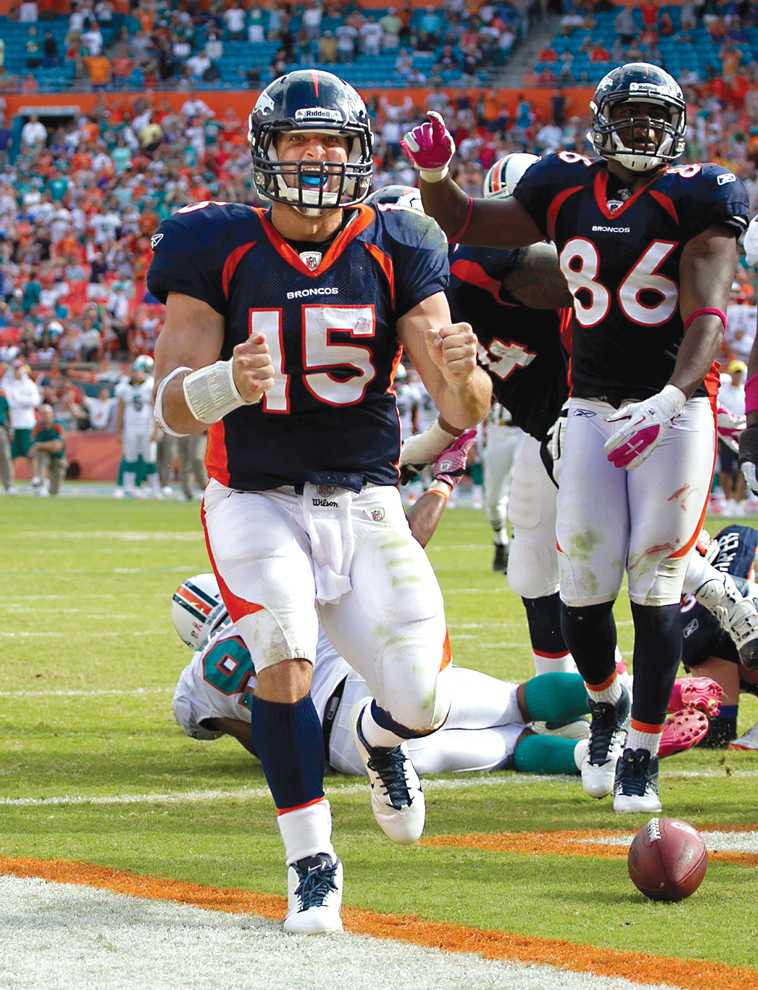 In four career starts, Broncos quarterback Tim Tebow has a 2-2 record, including a comeback win over the Dolphins on Sunday. Photo Credit: Courtesy of MCT

The Denver Broncos’ 2010 first-round pick, quarterback Tim Tebow capped off a surging victory against the winless Dolphins Sunday when he threw two touchdowns in the fourth quarter to rally his team from a 15-point deficit to force overtime and set up Matt Prater for a game-winning 52-yard field goal.

Tebow, who’s been riding the bench behind Kyle Orton for the majority of games since 2010, finally got his first start of the season against Miami and showed why the starting role should be his.

Orton has been struggling as of late, and he’s shown the Denver organization time and time again that he’s clearly not the quarterback it needs. Why they elected to start him over Tebow for so long still remains a mystery.

In 2009, after a trade that shipped Jay Cutler to the Bears, the newly-acquired Orton led the Broncos to a blazing 6-0 start, but they lost eight of their last 10 and missed the playoffs. Next year, the Broncos finished an abysmal 4-12 as Orton ended his season early after 13 games with 3,653 yards, a ho-hum passer rating of 87.5 and a pair of bruised ribs that allowed Tebow to start for the remainder of the season.

As a starter, Tebow showed promise. In the three games he started in Orton’s absence, he threw for 651 yards and five touchdowns with three interceptions, completing 50 percent of his passes to finish with an average of 217 yards-per-game and a passer rating of 82.1.

So what gives Tebow the edge over Orton if their passing numbers are similar?

To put the difference into perspective, Tebow has rushed for 264 yards and seven touchdowns in just four career starts while Orton has run for 278 with three TD’s in his six-year career. Furthermore, Tebow has a career rushing average of 5.3 yards per carry compared to Orton’s 2.3.

Tebow’s rushing expertise is something the Broncos desperately need after having ranked 26th in rushing yards per game in 2010. They haven’t fared much better this year, ranking at a below-average 19th.

With their running backs Knowshon Moreno (hamstring) and Willis McGahee (hand) banged up with injuries, the Broncos’ ground game needed a boost, and Tebow came through by netting 102 yards and a touchdown in only 14 rushing attempts in their last two games. He’s averaging 7.3 yards per carry.

Running statistics aside, Tebow has shown he is superior to Orton in two other ways: the ability to throw deeper, and the determination to grind out wins.

Orton is known for being a conservative short-yardage passer and was averaging a mere 6.3 yards per completion before being benched in favor of Tebow, who’s averaged a whole yard more per completion as a starter.

Lastly, Orton is a well-known loser. With Orton under center, the Broncos have a dreadful record of 12-22. While they’re only 2-2 with Tebow as a starter, both of those wins have been come-from-behind victories led by Tebow’s astounding play in the clutch.

It’s quite clear: Orton is not what the Broncos need, and it was baffling to see him continue to start last year as the losses piled up.

He may be a veteran quarterback with playoff experience from his days with the Chicago Bears, but he’s led his team into a rut the past two and a half seasons, and maybe, just maybe, Tebow will be able to pull them out and save this once proud, ailing franchise.