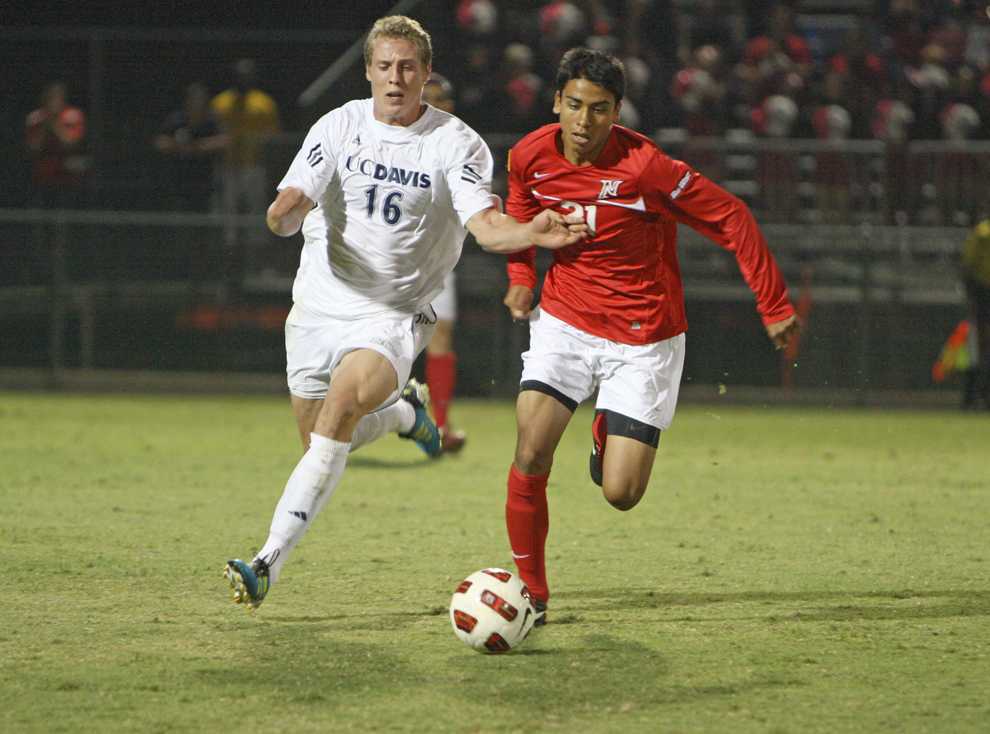 Carlos Benavides (21) and the Matadors look to even the season series with UCI tonight. Photo Credit: Mariela Molina/ Visual Editor

After defeating UCLA for the first time at Drake Stadium Saturday night, CSUN (7-7-1, 3-3 Big West) is back home for a three-game homestand, starting with a rematch against UC Irvine Wednesday night.

“Back to business,” Matador midfielder and co-captain Rafael Garcia said after Saturday’s match. “(Beating UCLA is a) huge confidence booster for us. It just lets us know that we can compete with the best in the nation.”

The Anteaters (13-4, 5-2) are tied for first place in the Big West Conference with UC Davis, while CSUN dropped to fourth place after UC Riverside’s 3-2 victory over UC Santa Barbara Saturday night.

The Matadors’ first meeting with UCI on Oct. 8 did not go as planned. Garcia still hasn’t forgotten what happened during the 2-0 loss to the Anteaters.

“We’re looking to bounce back against them,” he said. “We know we didn’t play the best game at their place, so they should definitely expect a battle from us.”

CSUN assistant coach Peter Bomar has a plan laid out for the team, hoping the match will end in its favor the second time around.

“We know (UCI’s) strengths, we know their weaknesses, so we’ll play to that,” Bomar said. “Last time, it was unfortunate that we gave up two own goals against Irvine. So in our eyes, they didn’t beat us, we just lost.

“(The game against UCLA) is good for confidence, but Wednesday against Irvine is going to be more important than this.”

The upcoming match against the Anteaters is key for CSUN. A victory against UCI will keep the Matadors in the hunt for a spot in the Big West Tournament, said Northridge goalkeeper Michael Abalos.

“If we can get three points, we’re right back in the mix,” he said. “We want to be up there at the top.”

Though the Matadors stunned UCLA on its home pitch, the team has to continue forward and take this momentum into the next match, CSUN forward Brian Behrad said.

Edwin Rivas, the CSUN forward who netted the game-winning goal against the Bruins, said the win at UCLA was a statement victory.

“We came in as the underdogs,” Rivas said. “They thought they were going to take it at us easy, but it wasn’t that easy, because we were not going to let down like that. And they’re ranked, so hopefully we put our name out there now that Northridge is back.”

Behrad, who scored the equalizer in Saturday’s match, said the team cannot wait until Wednesday night to get back to business.

“We’re hungry. We don’t like losing,” he said. “Every single one of us on this team does not like losing. And because we lost to Irvine, we really want to get back at them and just take it to them and just beat them.”