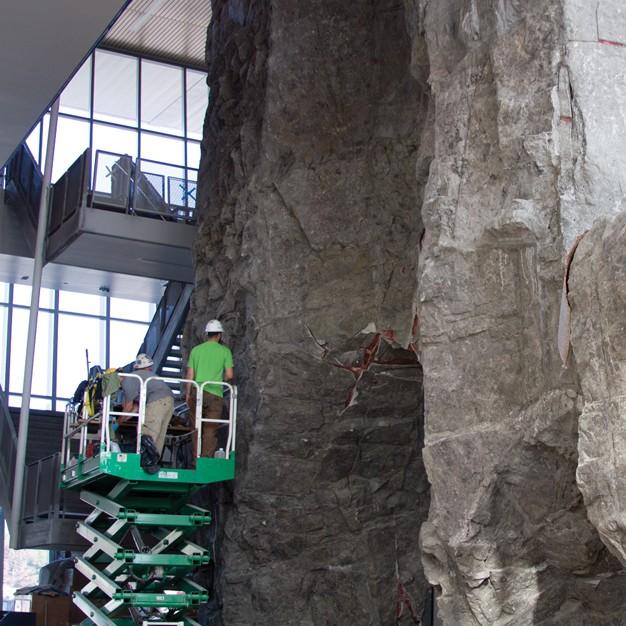 Construction workers work on the rockwall located in the new Student Recreation Center which is set to open Spring 2012. Tessie Navarro / Visual Editor

There are only a few months until the new Student Recreation Center (SRC) opens, and the facility is undergoing its ‘punch list’ phase, when the building is inspected.

“You’re going to want to be there, it’s going to be amazing,” said Shannon Krajewski, associate director of marketing and programs.

The SRC will have yoga, cardio kickboxing and pilates classes, and house a rock climbing wall.

“There is something for everyone, it isn’t only a gym,” Krajewski said.

The center is estimated to finish $8 million under budget, a feat for a non-state project to complete, Krajewski said.  A quarter of the workout machines are designed with new re-rev technology, which will generate power and send it back to the center.

Krajewski said she has heard comments about mandatory center fees that will be charged to all students.

The $130 membership fee will be included in the campus-wide USU fee, which will be raised $3 annually.

In an interview after the meeting, A.S. President Amanda Flavin said she didn’t have an official statement on students paying the center fees regardless of usage.

Alumni from 2007 to present will be eligible for a discount on their alumni memberships because they have contributed by paying fees in their tuition.

Flavin said the recreation center will be a good addition to the CSUN campus.

“I think it’s wonderful, it’s something that has been long awaited by students.  Every other campus has one, so it’s finally about time we have one,” Flavin said. “I think it’ll enhance our pride in our university. It’ll obviously provide a lot of health benefits to our students and maybe make our campus a little more active.”