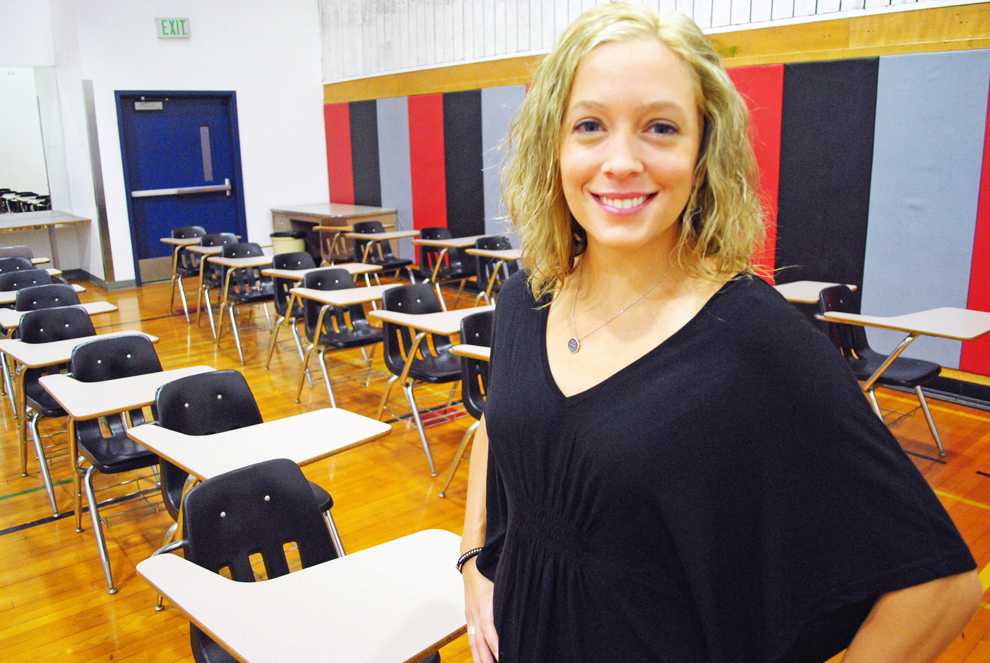 Assistant professor, Ashley Samson, in one of the Kinsiology classrooms. Samson has been at CSUN and California for a month now and says "the weather is great...Meeting people has been fun and everyone is so nice." Photo Credit: Andres Aguila / Daily Sundial

At first, it was a pipe dream, but the decision to move from Louisiana to California came easily for Ashley Samson.

“I’ve always loved California and how it has so many outdoor activities,” Samson said, an assistant professor in the kinesiology department. “During my job hunt, it so happened this position opened up. An added bonus – it was in California.”

This past summer, Samson moved almost 2,000 miles away from her native Louisiana to join the CSUN faculty.

She studied psychology at Northwestern State University, but that was not her final education stop.

Samson moved to Dallas for two years and attended the University of North Texas, where she pursued a master’s degree in sports psychology. After Texas, Samson moved back to Louisiana and earned a Ph.D from Louisiana State University (LSU), in kinesiology, with an emphasis in psychology.

“I went straight through school and remained active,” Samson said.

She kept a persistent role in student involvement. At the time, she was part of the rowing team, ran four marathons, and rode horses.

Born and raised outside of New Orleans, Samson spent most of her life growing up in a very active setting. She ran cross country and fell in love with riding horses at a young age.

“The big thing is how therapeutic and relaxing horseback riding is,” Samson said. “It’s a stress reliever and I enjoy it at the same time. Also, I’ve learned (that) to be good at your job, there must be a balance.”

Samson finds that balance by exercising her body and mind, including conducting research.

“It helps you to become a better professor when you’re always looking into studies and engaging students in what you have learned,” she said.

While at LSU, Samson oversaw a group training for a marathon as part of research and study. She said the athletes participated in surveys, interviews, and studies focusing on their self-confidence, moods, and concentration.

For about five months, Samson captured their experiences and discovered as training got harder, moods and self-efficacy would fluctuate.

“When they raced, it became a positive experience for them to tackle an event like this in their lifetime,” Samson said.

“(I have) ideas for some studies, and I want to get more involved at a university level by participating in committees that work with students,” said Samson, who is co-adviser for the kinesiology club.

Between work and fun, Samson finds time to take pictures with her Nikon D70 camera and telephoto lens, capturing black-and-white images of unique objects she may come across.

“My favorite photo I’ve shot is one of a rusted fence, decorated with the fleur-de-lis,” Samson said. “This photo reminds me of home.”