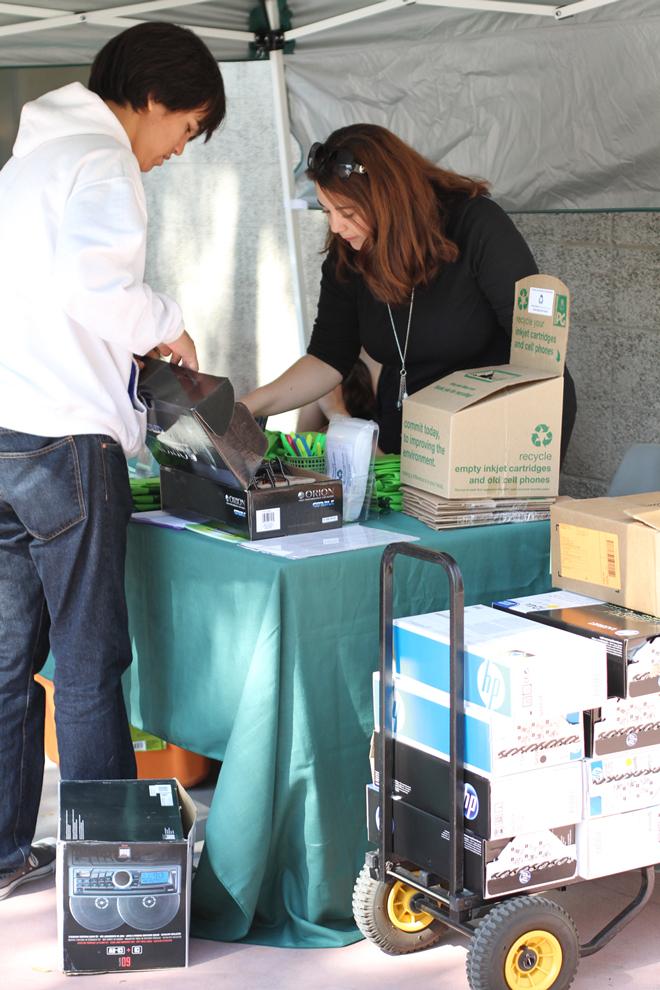 CSUN students talked trash Wednesday during the ninth annual Campus Sustainability Day, a nationwide program sponsored by the Association for the Advancement of Sustainability in Higher Education.

Hosted by CSUN’s Institute for Sustainability, the event allowed students, faculty and community members to talk about solutions for a sustainable future.

“Our goal is to educate people on issues of sustainability,” said Helen Cox, director of the Institute.

The event began with a film screening of “Bag It,” a documentary on plastic waste. The film illustrates how the consumptive use of plastic has grown into a never-ending problem.

Plastic is among the most generated form of municipal solid waste, along with food scraps, yard trimmings, paper and paperboard, according to the U.S. Environmental Protection Agency (EPA).

Americans produced about 243 million tons of garbage in 2009, averaging about 4.3 pounds of waste per person per day, the EPA reported.

“Just because plastic is disposable doesn’t mean it goes away,” documentary star Jeb Berrier said in the film.

“It’s amazing to see how much Americans have consumed and how our actions have indirect consequences on other living things,” she said. “Seeing the movie made me a bit sad, but it’s pushed me to take part in a positive change for the environment.”

Of the 243 million tons of generated waste, 12.3 percent of it consisted of plastics.

“I’m pretty disgusted with myself and with our society,” said biology major Vicki Sanchez, 25. “We’re a disgusting group of people and we need to work on decreasing the amount of waste we produce.”

The trash talk continued with a lecture titled “Toxic Trash,” presented by Michael Sullivan of the department of environmental and occupational health.

Sullivan encouraged audience members to live sustainability, be mindful of the hazardous wastes they dispose, and stop discarding and start recycling.

“You have the ability to break the chain and decrease the amount of waste we’re producing,” he told the audience. “Let’s start doing something today. Together we can not only keep America beautiful but also safe and sustainable.”

“Plastic bags are a problem,” he said. “They are the number one consumer product in the world, but we really don’t need them.”

The Institute for Sustainability has participated in this program for four years, Cox said.

“We’re working hard to make a difference and bring more issues of sustainability to the CSUN campus,” she said.