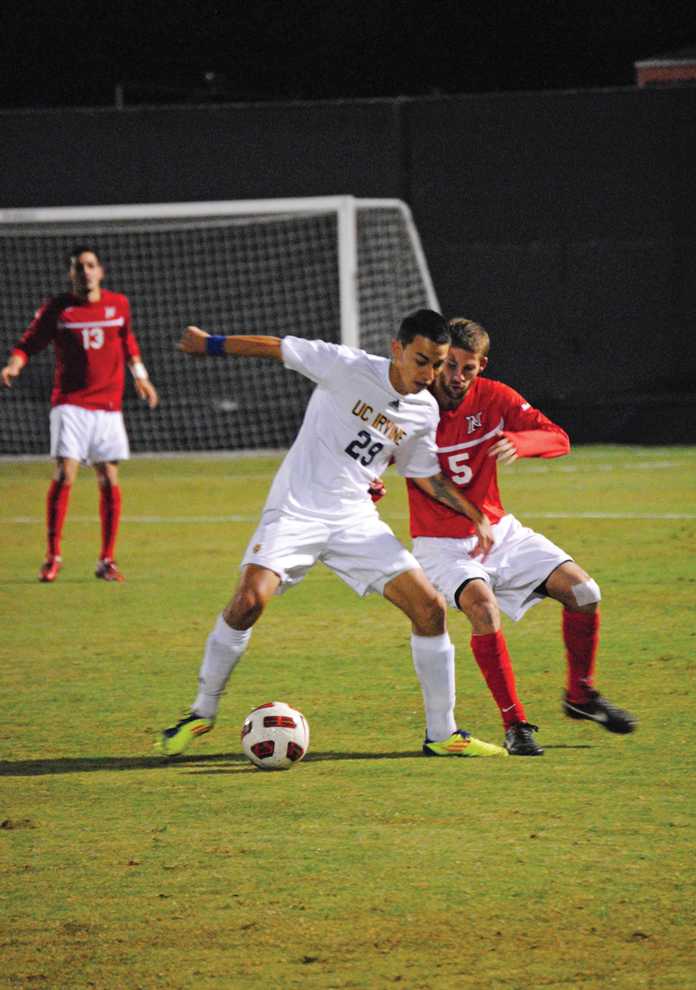 For only the third time this season, the CSUN men’s soccer team was held scoreless and on two occasions it came at the hands of UC Irvine.

After 110 minutes of gameplay, CSUN and No. 4 UCI could not find the back of the net and the match ended in a 0-0 tie Wednesday night at Matador Soccer Field.

“I’m just happy we didn’t lose because we’ve been losing the last overtime (games),” said defender and co-captain Joe Franco, whose team earned its second tie of the season and broke a two-game losing streak in Big West play. “We stayed focused and didn’t give away a goal.”

The draw earned CSUN one point in the Big West standings and kept them in fourth place with 10 points. Irvine, who came into the match tied with UC Davis, took sole position of first place with 16 points.

The last tie for the Matadors came on Sept. 15 when the match between CSUN and Cal State Bakersfield ended at 2-2.

It was a display of defense from both teams in the first half. The Anteaters produced seven shots, with three on goal. The Matadors were only able to tally three shots with one on goal. UCI shared the shooting opportunities, with all seven shots coming from different players.

Both goalkeepers were able to save all shots that were on goal in the first, with CSUN goalkeeper Michael Abalos coming up with three saves, and Irvine’s Andrew Fontein with one.

The foul count was relatively low, compared to the first meeting between the teams. Foul count in the first half was four, with three to the Matadors and one to the Anteaters.

It was more of the same in the second half, with both clubs not finding a goal. UCI tallied nine more shots and Northridge tacked on 11 more to its stats. CSUN was only able to find one more shot on goal, while the Anteaters found three more.

Matador forward Brian Behrad came close to finding the back of the net after attempting a bicycle kick. The kick connected, but he couldn’t finish the goal.

“I actually lost it in the light. I couldn’t even find the ball,” Behrad said. “I just swung my leg, hoping that I would get it. I’ve only scored once with a bicycle. It’s a great feeling.”

It became clear that as the game rolled along, CSUN and UCI’s defenses were on top of its games.

“Tonight I thought we fought well, but for whatever reason we just couldn’t put the ball away,” midfielder and co-captain Rafael Garcia said. “But I thought we had our opportunities. I thought the defense did a tremendous job getting a shutout at home. I’ll take a shutout any day.”

According to assistant coach Peter Bomar, what the team needed to do to get the win was to finish.

“We had a couple opportunities, that, from where we were sitting, probably just missed the post by a couple of inches. Could have been more, could have been less,” he said. “The start of the second half, we came out and really took it to them, and in those situations is where you want to score.”

With CSUN finishing the match with 17 shots, Garcia believes the team could do nothing else to find the victory.

“Unfortunately for us, it didn’t come with a (win),” he said. “We’ll keep grinding. We still have a lot of games left, and we’re in a good position. We hold our future in our hands right now.”
The Matadors play again Saturday night at home, with another rematch against Cal Poly.