W-Bball: Erving and the Matadors dominate in exhibition game 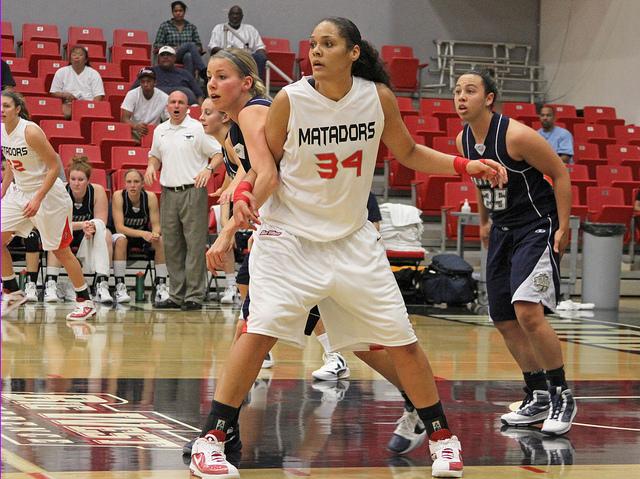 Jasmine Erving didn’t care that the game against The Master’s College on Saturday was only an exhibition.

The 6-foot-2 senior center had no mercy on the non-Division I school from Santa Clarita, scoring 23 of her 27 points in the first half en route to CSUN’s 87-53 victory over the Mustangs at the Matadome.

Erving slowed down in the second period, scoring only four points and didn’t play the final 15 minutes. Her teammates picked up the slack as the Matadors increased their lead to 34 points to close out the Mustangs in their lone preseason game of the year.

After the game, Erving was unable to walk to the locker room due to cramps. She sat on the ground grimacing in pain while trainers attended to her. Erving wasn’t available for postgame comments.

“She’s fine, it was just cramping issues… it was nothing,” CSUN head coach Jason Flowers said about his star center. “It’s an exhibition game, so we’re not going to force her to play a lot of minutes. She did really well in the minutes she played. She’ll be back for us.”

Even though the Matadors won by a large margin, Flowers wasn’t pleased with the 44 free-throw attempts his team allowed.

“The biggest thing with our defense is that we have to stop fouling,” the second-year head coach said. “Obviously it’s our first time playing with referees and it’s a little different from how we play in practice, but we need to make the adjustments.”

The CSUN defense came up with 18 steals and forced the Mustangs into 36 turnovers. The Master’s College shot a cold 24.6 percent from the field compared to Northridge’s 44.3 percent.

With Erving bullying her way through the Mustang defenders, CSUN dominated the battle in the paint. The Matador forwards and centers accounted for 65 out of CSUN’s 87 total points.

Sophomore guard Haley White had no problem with Erving taking the spotlight.

“It’s makes our lives easier as guards, because I know if I shoot the ball she’ll be there,” White said about Erving, who picked up eight rebounds. “She posts up hard and gets rebounds.”

The Master’s College’s biggest advantage was three points and they never led after CSUN went up 20-19 with 6:10 left in the first half.

Minutes later the Matadors went on a 12-0 run to increase their lead to 38-24 and never looked back.

The Matadors have two weeks until they open their 2011-12 season with four road games, starting against the University of San Francisco on Nov. 11.