M-Soccer: Matadors drop in standings with another scoreless draw 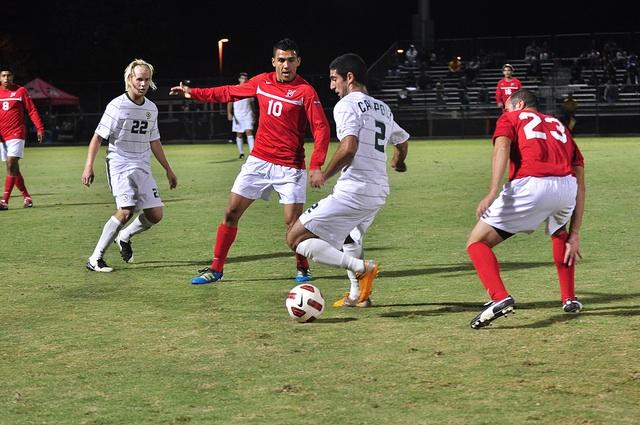 With the tie, Northridge fell to fifth place in the Big West Conference, with UC Santa Barbara moving into fourth.

“It’s going to come down to the last week,” CSUN head coach Terry Davila said. “I’ve told you from the beginning of the year and I haven’t changed my motto about that.”

The Matadors had two opportunities to score in the first half, both coming from midfielder Chris Smith. One of Smith’s shot opportunities came when he ran up the right side of the pitch and received a cross from one of his teammates. The ball was a bit too high for Smith, but he still got a shot off. But due to the angle and height of the cross, his shot sailed to the left of the net.

Smith’s other shot was a header that was collected by Cal Poly goalkeeper Patrick McLain.

“Sometimes it just doesn’t come through for you,” Smith said.

He continued by talking about movies that had good finishes, but said this match was a “disappointing ending.”

CSUN had more chances to get the win, with midfielder Alberto Rosas striking the crossbar with just a few minutes left in the first overtime period.

“We just got so unlucky there when (Rosas) hit the crossbar with a minute left,” defender and co-captain Joe Franco said. “First half was a little sluggish, but we picked it up because it was coming down to crunch time.”

It was a slow first period for both teams. Shots were scarce, with CSUN tallying five and Cal Poly with four. Matador midfielder Smith’

s shots were the only shots on goal for the half.

Both teams had more fouls than shots in the first 45 minutes, with the Matadors earning 10 while San Luis Obispo was called for five.

Matador co-captain Rafael Garcia was taken out of the match midway through the first half and didn’t see any minutes in the second half. Defender Yuval Barak came onto the pitch after halftime with the other captain’s armband.

Cal Poly and CSUN tried to make a push in the second, but to no avail. Defenses on both sides stopped all scoring opportunities. The Matadors added another five shots to their stats and had a total of three shots on goal at the end of the second half. SLO also doubled their shot count from the first half and managed to find their first shot on goal in the second half.