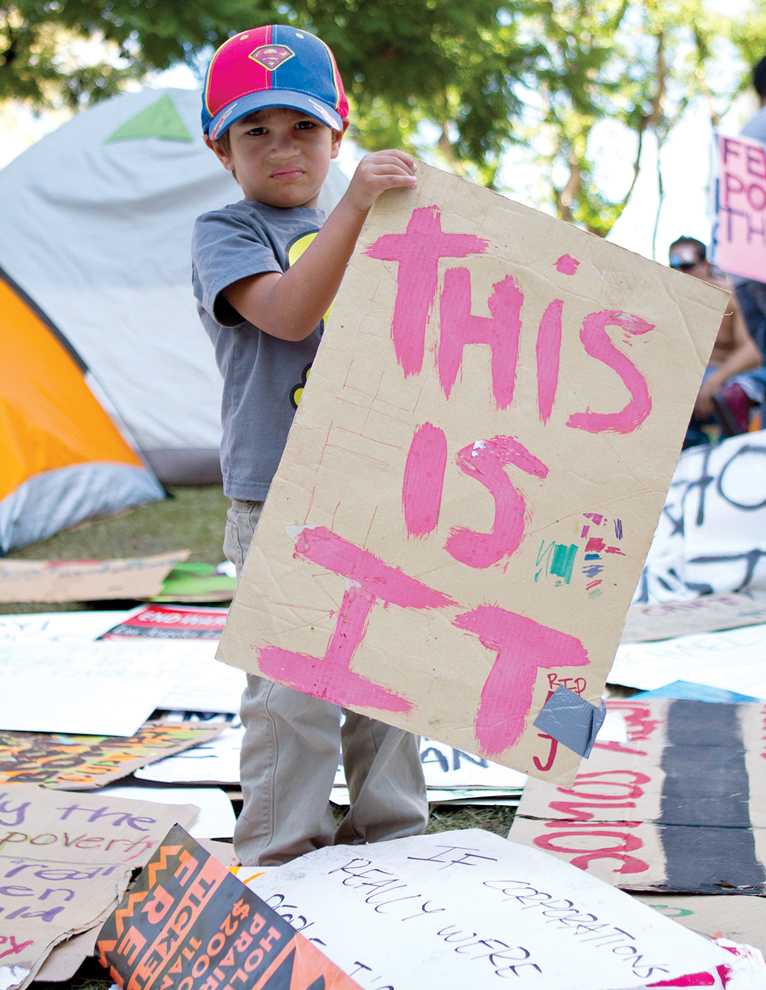 A little boy chooses a sign from a pile of protest signs on City Hall's north lawn in Downtown Los Angeles on October 8. Occupy LA participants are numbered at approximately 300 people of all ages. Kat Russell / Daily Sundial

Occupy Los Angeles has staked out the lawns around city hall for almost one month, but last week Mayor Antonio Villaraigosa said they cannot continue indefinitely and asked city officials to draft restrictions as to when people are allowed on city property.

LAPD has not yet made a decision if or when the police will take action to break up the peaceful encampment, according to media personnel for Chief of Police Charlie Beck.

City officials and county health inspectors, who had recently visited the camp, have voiced concern over the cleanliness of the camp and the harm the tent city has caused to the lawn and the trees, Villaraigosa said in an Oct. 26 statement.

About a dozen protestors showed up at Wednesday’s city council meeting to ask the council members to allow them to stay, according to the Los Angeles Times.

“We have enjoyed a very good relationship with the City of Los Angeles, whose council two weeks ago announced their support for Occupy LA,” the response read.  “As recently as this morning, Councilman Rosendahl reconfirmed his support of the occupiers. We sincerely hope that a positive working relationship between city officials and the LAPD continues. As for a time stamp on our departure, there is none.”

Lisa Clapier, a media producer for Occupy LA, said there is no plan for vacating the encampment or relocating. She does not think the police will try to force them out.

“I think that if there was any sort of raid (by police) there would be incredible outrage throughout the world,” Clapier said.

Occupiers have been guaranteed in writing and on video by the LAPD that they will absolutely not move in on the encampment, she added.

As of now, demonstrators plan to stay where they are. Clapier said that at the last count the encampment had grown to more than 700 people and as many as 1,500 on the weekends.