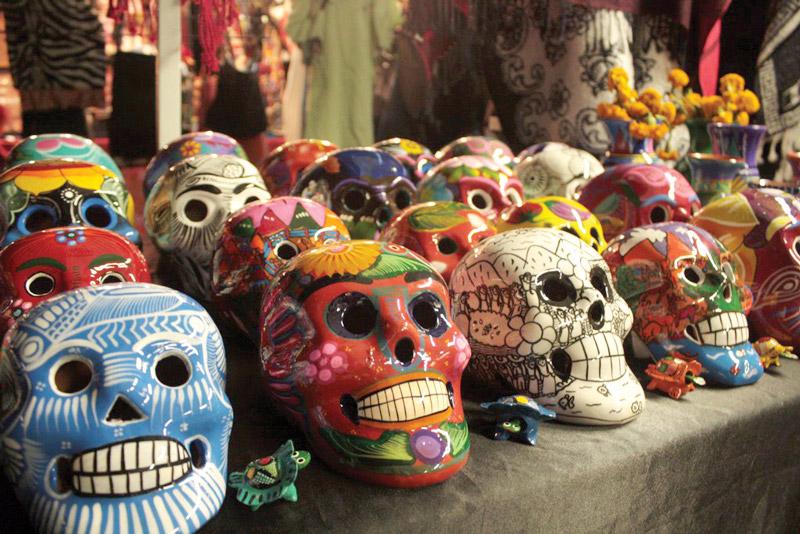 While some students plan to spend Halloween night partying in their costumes, passing out candy to trick-or-treaters or going door-to-door themselves, Ana Sanchez will be offering food and treats to the dead.

What might seem like a morbid Halloween activity is actually a joyous and celebratory Mexican tradition, she said.

“It’s a time to honor those who have passed on by celebrating their lives,” said Sanchez, 24-year-old health education major.
Sanchez’s offering of food to the dead celebrates El Dia de los Muertos, Spanish for “the day of the dead,” a festive three-day occasion when spirits of the dead are believed to return to their families on Halloween night.

The celebrations begin the evening of Oct. 31 and culminate on Nov. 2.

Civil engineering major Carlos Maciel, 22, said this event is rooted in religious beliefs. Keeping with tradition, Maciel’s family sets up an altar dedicated to friends and family members who have died.

“The table is often decorated with sweets, cempazuchitl (yellow marigolds) and pictures of the deceased,” he said. “There are also candles that burn to help the departed find their way home.”

On Nov. 1, many Filipino families spend the day at the cemetery to visit the graves of their loved ones, said chemistry graduate student Rhoda Hodes, 30.

Despite the location, Hodes said this annual tradition is far from solemn or sad.

“It’s really fun,” she said. “(Families) want to share these moments with their dearly departed because all throughout the year, their graves are lonely.”

Members can take time away from their busy schedules and come together for a day of love and remembrance.

But not every culture focuses on family-oriented traditions. On the scariest night of the year, some families focus on superstition.

“My mom is German and grew up believing you’re supposed to hide your knives on Halloween night,” said liberal arts major Kristine Mitchell, 19. “The belief is that returning ghosts who are angry and vengeful might bring you harm.”

Mitchell acknowledged this belief was unusual in comparison to other Halloween superstitions.

“Instead of avoiding black cats, my family just hides knives,” she said.  “It’s a weird, simple tradition, but it’s in my roots and it’s something I’m proud to say I do.”