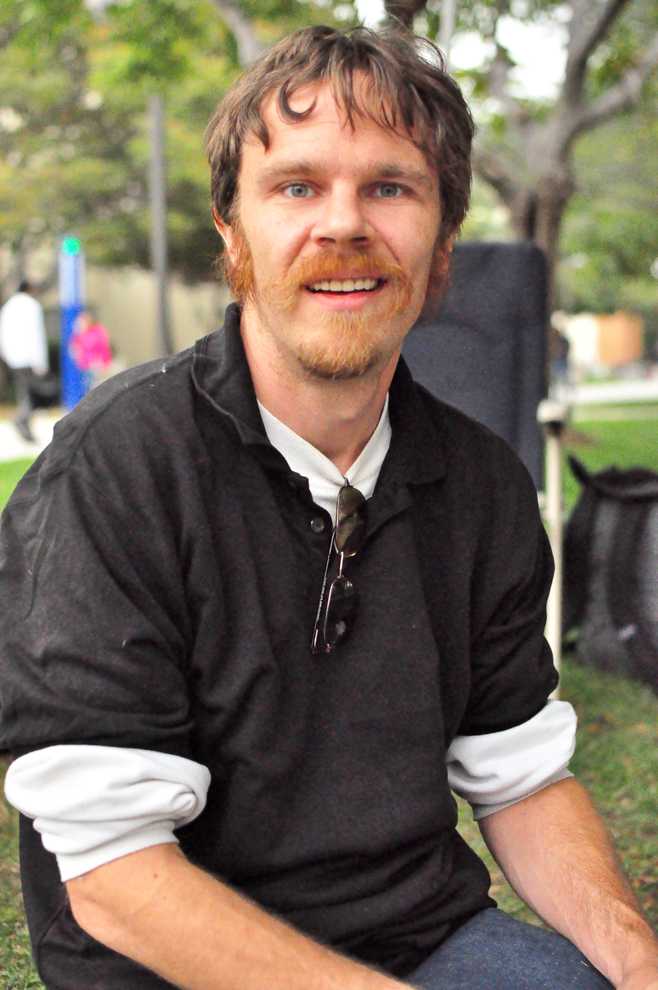 Jeff Woodruff, a full-time student at CSUN, supports the Occupy movement but says his education is his first priority. Woodruff has participated in Occupy CSUN on the Oviatt lawn. Photo Credit: Anthony Carpio

On a damp Tuesday afternoon, Jeff Woodruff set up his pop-up tent to camp for a few hours in support of the Occupy movement. But he didn’t set up in Downtown L.A. Instead, he settled in front of the Oviatt Library.

“This is the most efficient way for me to do it and still be involved,” the 33-year-old senior said. “In order for me to continue (participating with Occupy), I have to scale back active participation and be more of an adviser or more of a cheerleader-kind of role. And that’s something I can do here from campus.”

Woodruff, a history major,  fully supports the Occupy movement, but said his priority is school.

“Being able to set up and support the movement from here on campus will allow me to focus on school activities, which is my current job,” he said.

As a full-time student, Woodruff said his job is to go to CSUN and get an education.

“There’s a moral obligation to it as well,” he said. “I’ve always considered any job you do, you’re supposed to do to the utmost of your abilities. And since I go to school on Pell Grants and Cal Grants, effectively my job is to be a good student and my boss is the government.”

On top of being occupied with school work, he is also the vice president of communications for the Foothill Trails District Neighborhood Council.

“Unfortunately, my elected office duty is also a higher priority just because it’s something that I agreed to and signed on to do,” Woodruff said. “So I have to do that job as well.”

Woodruff tried to participate with the movement during its early stages in Los Angeles, but he found it to be difficult.

He said that he went to Pershing Square on Oct. 1, but didn’t camp at the site. Instead, he came as a commuting participant.

Woodruff found this to be difficult, traveling back and forth from where he lives and where people were gathering. Traveling to the protests was also taking a toll on his academics.

“Going to city hall is difficult for me because I’m a full-time student here,” he said. “This is also my senior year, so I’m taking a lot of difficult classes that are very time and work intensive. I was losing a lot of sleep because I still (needed) to do my homework.”

Though he is not at City Hall, he does what he can to support the Occupy movement.

“I believe that the importance of the movement at this point is to grow the tent,” Woodruff said. “We’ve been able to tap into what my mother and Richard Nixon called the silent majority. And the fact that

there’s enough people and there’s movement springing up all over the world, it’s our duty as citizens to take advantage of that, considering a year ago this would have been unthinkable.”

Woodruff understands the importance of the movement, but as long as he is in school, he takes his education ahead of anything else.
“I take education seriously,” he said. “If education is my issue, then I have to walk my talk.”