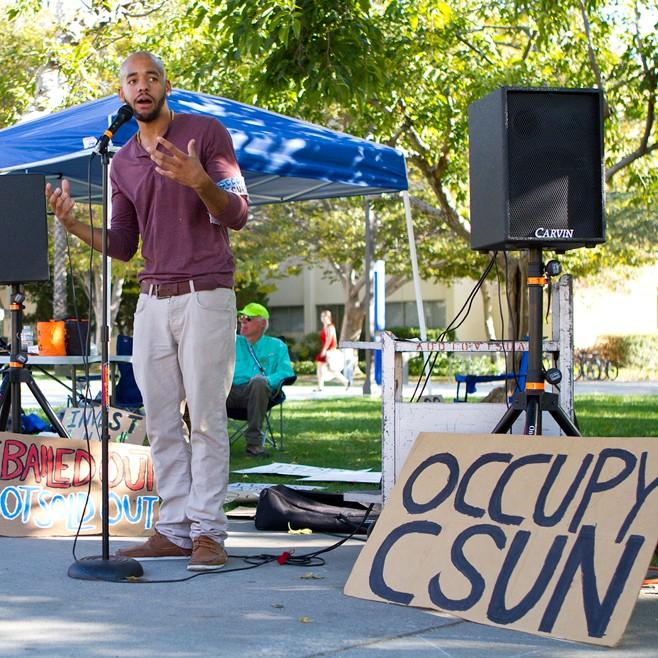 Justin Marks, co-founder of the Activist Student Coalition, speaks to the Occupy CSUN participants before they head out on their march towards the Wells Fargo on campus on Monday. Kat Russell / Daily Sundial

Student activists, who have had a relatively quiet presence on campus this semester, are focusing their attention on the greater community, according to student leaders.

Many organizing efforts on the part of student activists this semester have been focused on planning large-scale events with other campuses, including the college solidarity movement of Occupy Wall Street, said Krystal Brooks, member of Students for Quality Education,or SQE.

Occupy CSUN, which has waxed and waned in participation during its time on campus, did have professor participation and two well-attended general assemblies, Brooks said.

“Our key goal, if nothing else, is education,” Brooks said. “If people are educated, then (our movement) is successful.”
Brooks said planning and awareness of on-campus efforts could use improvement, particularly for the Occupy Colleges event CSUN participated in late October.

“We always keep in mind that we have so many students on our campus and there will always be people that don’t know (about activist efforts),” she said.  “But in this particular instance, we were unprepared because our action had to align with the nationwide college solidarity movement.”

SQE protested the unveiling of the Matador statue and “crashed” the President’s Summit in order to ask President Koester questions about tuition reform.

However, the Occupy LA movement has been one of the main focuses of SQE, Brooks said.

“If people ask, ‘Where are all the activists on campus?’ They’re at Occupy L.A.,” Brooks said. “That’s where our priority is. It affects everyone. Being a student activist is just one part of activism.”

Student activists involved in tuition and education have emphasized the importance of organizing at the higher level.

Justin Marks, co-founder of the Activist Student Coalition, which organized the CSU budget-cut protest in March, said his activism is focused on CSU and UC organization of Initiative 1481, a potential oil tax that could bring $3 billion to California’s education system, according to the bill’s proponents.

Marks is also focusing on what he called the democratization of the CSU board of trustees and hoping to find students from the Occupy movement to assist in this.

“To me, I feel like (activism) is everywhere,” Marks said. “When people don’t know about (progressive movements or) Occupy, I think, ‘How can you not know?’”

The challenge with student activism, Marks added, is the dense intersectionality of campus activists.

Marks, who is involved with the Black Student Union, SQE, Hip Hop Think Tank and other campus organizations, said activist networks tend to get very involved and forget about networking with other students.

Marks suggested that in order to connect to a larger group of people and increase awareness, the definition of activism needs to be expanded.

“Activism is not just protesting or asking people to sign a petition,” Marks said. “Activism is working two jobs. Activism is passing your classes. The word is stigmatized because people don’t see the value in getting behind a megaphone.”