Learning leadership on the mountains 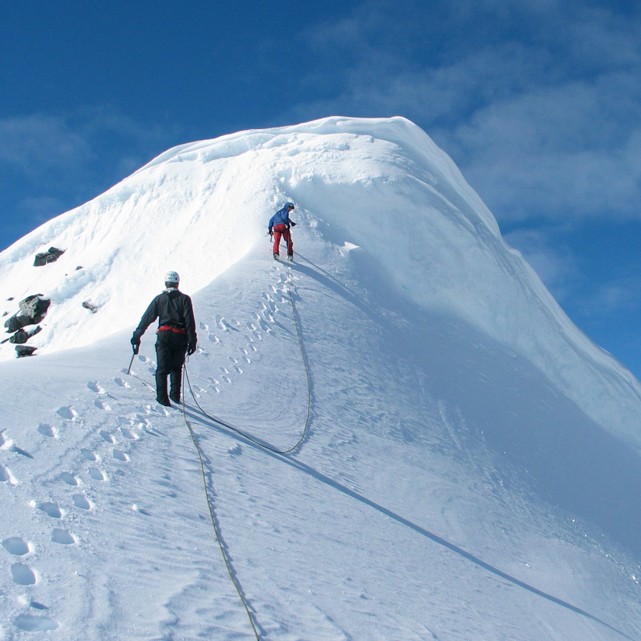 I wake up and bring just enough of myself out of my zero-degree sleeping bag to eat cereal with powdered milk, a meal prepared the night before to save time.

“What am I doing?” I think as I realize the scope of today’s endeavor, along with that of the expedition before and after today.

That was the morning of the 22nd day in the Waddington Range of British Columbia, Canada. I was a student of the 28-day Waddington Range Mountaineering course of the National Outdoor Leadership School (NOLS).

I want to stay in the tent, in the sleeping bag. Staying in means warmth and the comfort that follows with satisfying such a basic need.

“Just get up. Once you get moving, you’ll warm up,” I tell myself. It’s the motivation needed to put on my warm layers and step out into the darkness of subzero temperatures.

After putting on boots rigid from the cold, I step onto very hard snow. With the crunch of the hard snow came the realization of how great this particularly cold morning is.

It’s a great morning because the hard snow means easier travel over the miles of glacier and up the several thousand feet we must climb if we plan to make the 9,110-foot summit of Mount Chris Spencer today. It also means that we will have a reduced risk of avalanche, unlike what we experienced on our attempt two days earlier.

After several days of travel to get to the backcountry, 12 students (later, 11) and three instructors traversed the Waddington Range from July 13 to Aug. 12. During this time, we covered over 70 miles from west to east on a variance of alpine terrain, primarily glacier.

I spent my first year at CSUN as a business major, but after becoming lost from my personal understanding, I had to search for something different.

I had enough money from a student loan to pay for the course and any necessary gear, so I made it a point to do whatever it took.

I finished the semester and informed my boss at CSUN’s Outdoor Adventures program, and told the school that I would be taking some time off.

My boss told me he understood and said I would be welcomed whenever my life brought me back, and the school told me I could take up to a year off without consequence. I was worried about how my parents would feel. Though they were naturally concerned, they were supportive of my choice.

The first day at the National Outdoor Leadership School was fast-paced. We organized our gear, packing nearly 800 pounds of food for the 28 days, and rushed to catch a ferry in Vancouver, Canada.

The happiness and relief I felt at the sight of snow instead of alders was unreal. It meant a greater elevation. We wouldn’t be trekking through plants that pulled against our every movement anymore.

After taking small planes to our next stop, the next few days on snow were amazing. There were spectacular panoramas of snow-capped mountains as far as the eye could see, stunning peaks with aggressive lines and challenging faces. On these days, we learned the basics of safe snow and glacier travel.

We packed up camp and moved to a new location on July 28. This was the start of student leadership on the course, one of the things that sets National Outdoor Leadership School apart. Students are given the opportunity to make all of the decisions. The next several days were spent with a rotation of student leaders to our next base camp below Mount Waddington (13,186 ft.).

We started at 7 a.m. one day to attempt Mount Chris Spencer and conditions quickly deteriorated in the hot sun. After seeing a spectacular avalanche, we took our cue to return to camp. The next day we rested.

The following day we began a series of long treks to make our way out, taking one break day to allow the chance for ice climbing.

Our final two days of trekking were very arduous and long. The first of the two lasted 15 hours, until we reached a point where we had an open bivy, a one-person tent. We slept from midnight to 4:30 a.m. to begin trekking again by 5 a.m.

The next day, we traveled nearly 15 miles on a logging road until we were picked up by a strange but friendly individual named Chuck, who lives at a logging camp he purchased to host those desiring access to the Waddington Range.

I had my first shower in 28 days at Chuck’s camp on Aug. 11, and we began flying out on bush planes later that day.

Thanks to my trip, my passion for the outdoors has been strengthened, along with my understanding of self and a sense of accomplishment.

Before the end of spring semester, I changed my major to recreation and tourism management. I intend to return to school for the spring 2012 semester.

I am taking the fall semester off to allow myself the freedom to pursue the outdoors and outdoor career ideas.

As I move toward my future, I am grateful to have had the chance to live and grow in the mountains. I can’t know for sure what path my life will follow, but I know I will always remember the lessons I’ve learned from the backcountry.

George Taylor took a year at CSUN and is currently taking time off to pursue outdoor recreation and will be back in the spring.