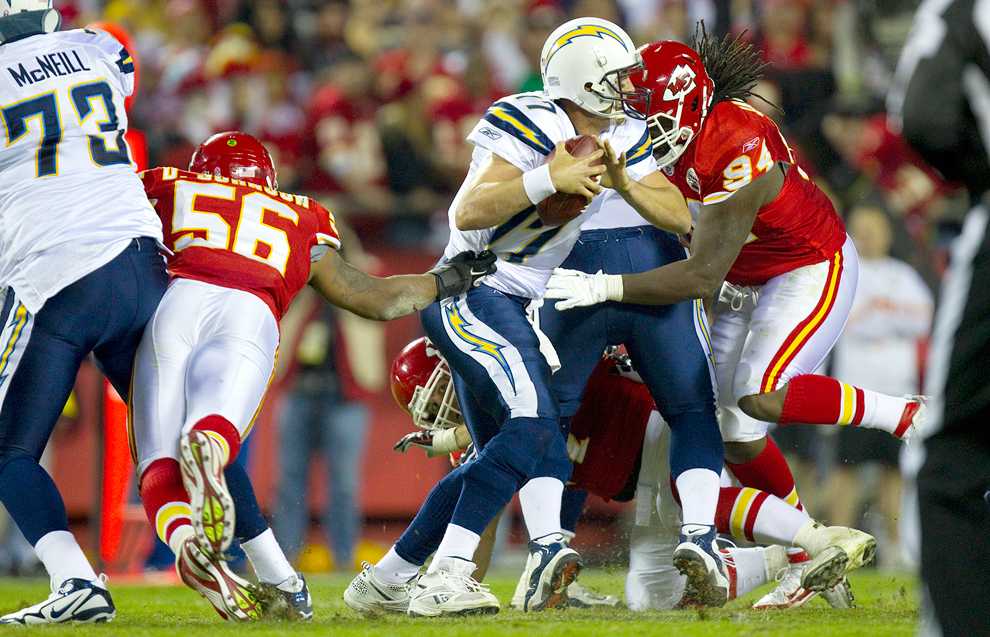 Any top quarterbacks list with Philip Rivers placed high on it is now fraudulent.

Coming into the season, Rivers was projected as a top five quarterback, but what he’s shown so far barely has him cracking the top 20.

In the fourth quarter of Monday Night Football, the Chargers and Chiefs were engaged in a 20-20 lock when Rivers drove his team down the field, converting on a third and 18 to set up Nick Novak for a 33-yard chipper for the win as time would expire.

But the kick never came.

Before trying the field goal, the Chargers elected to center the ball so Novak could have a perfectly aligned kick, but Rivers fumbled the ensuing snap and the Chiefs recovered — a mistake that sent the game into overtime and cost them the win.

Rivers’ untimely gaffe wasn’t his only mishap of the game: he finished with 369 yards, no touchdowns, and two first-quarter interceptions.

This kind of play has been common for Rivers — he’s only thrown seven touchdowns on the season, but has somehow managed to turn the ball over 14 times (11 interceptions, three lost fumbles).

So how bad have things been going for Rivers, exactly? Well, let’s put it this way: Matt Hasselbeck has a higher QB rating so far, and he plays for the Titans.

It’s safe to say Rivers isn’t playing up to his potential, but there are overlooked quarterbacks who are surging and surprising everyone with their excellent play. If things continue this way, Rivers might find himself surpassed.

To put it bluntly: Smith has had an awful career. Branded as a bust after being drafted first overall in 2005, Smith has put up sub-par numbers his entire career, winning only 20 games until the end of 2010. His career passer rating is a laughable 74.7, and he’s barely thrown more touchdowns than interceptions, as his current ratio stands at 60-55.

But the start of this season changed everything. Uncharacteristically, Smith has lead his team to a 6-1 start, their best record in over a decade, completing a blazing 63.2 percent of his passes for nine touchdowns and only two interceptions. Although he only throws for 182 yards-per-game, his passer rating of 95.7 is a career high.

Cam Newton (Carolina Panthers)
If there were any doubts Newton could play in the NFL, they’re gone now. Newton’s numbers are off-the-charts — he’s thrown nearly 2400 yards to go along with 11 touchdowns and nine interceptions. But that’s just the tip of the iceberg, Newton has also rushed for 319 yards and seven touchdowns, meaning he’s accounted for 70 percent of his entire team’s points.

Quite simply: Newton is a stud. He can throw, he can pass, and he’s only 22-years-old. It’s only a matter of time before he jettisons well-respected players for their spots on top quarterback lists, but there’s one thing he hasn’t quite figured out yet: how to win. But the losses can’t all be attributed to him — Newton has shown he can march down the field when needed, it’s not his fault his defense allows over 25 points-per-game and his kicker can’t put in chippers.

Cutler has had a tough couple of years with the Bears: his first season with them he threw 26 interceptions, averaged only 6.6 yards-per-throw and had an abysmal passer rating of 76.8. The very next year, his manhood and toughness were questioned by fans and other players alike after he left the NFC championship game against the Packers with a knee injury.

His third season with the Bears has been pretty decent so far. He’s led them to a 4-3 start throwing for 241 yards-per-game and nine touchdowns. His passer rating, while not amazing, eclipses Rivers’ by four points.