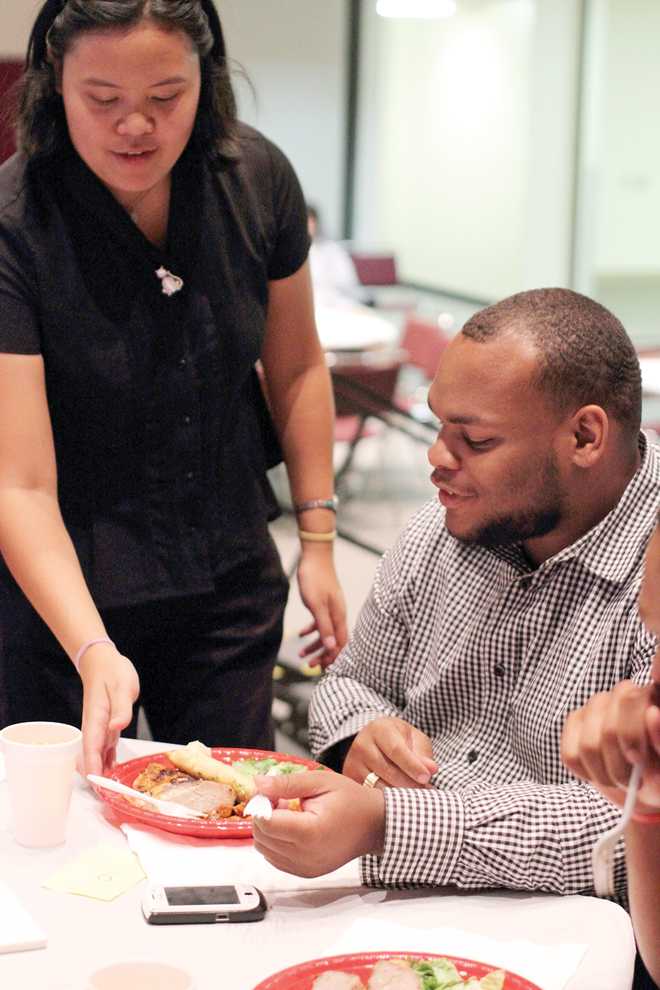 High Class: Only 24 privileged students like Alan Prince were served a full course meal with soda as other students got either only rice or beans with rice. Photo Credit: Simon Gambaryan / Daily Sundial

Unified We Serve hosted a free steak dinner for students and faculty in the Northridge Center Tuesday night, and guests were in for a surprise.

The dinner was, in fact, a poverty simulation, in which only some guests would actually sit down to steak, said Eunice Eugenio, member of Unified We Serve.

“Each student is going to be individually assigned at random to a class – upper class, middle class or lower class – and will be served differently to show them how it feels to be in these classes,” Eugenio said.

The event kick started the group’s third annual food and clothing drive while raising awareness of poverty with educational presentations, including talks from Luke Ippoliti and Richard Weinroth of the nonprofit MEND (Meet Each Need with Dignity), and Devon Johnson of the campus religious group H.O.P.E Fellowship.

The organization’s plan was to bring as many students as possible to the event, which would have been difficult if they had known only a percentage of the attendees would receive the steak dinner, said Justin Weiss, event master of ceremony and coordinator for Unified We Serve.

Surprisingly, people didn’t walk out after learning about the class divisions, Weiss said after the event.

“Rather than fill their stomachs with steak, we want to fill their souls with understanding of what people are going through in this world, both internationally and locally,” Weiss said.

Students lined up along the A.S. ticket office waiting for the event to start, and the line was split into three once the event began.

Erika Lopez, 18, was placed in the lower class group and had to walk to the back of the room to get her dinner: rice and water.

“I think that’s all we’re getting for now, I saw more food over there,” she said.

On stage, the upper class had already been served steak, salad, beans, chicken and soda, while below, members of the lower class group rationalized their rice and water meal by saying everyone wouldn’t stay for the educational part of the event if they gave the steak out first.

Even on stage, minor complaints where expressed, such as having food but not utensils, or not getting plates sooner than others.
Videos showing hunger across the globe and in the U.S. played as people were finishing their meals. Guests seated on stage in the upper class were closest to these images of homeless people, starving children and empty refrigerators.

An excerpt from “The Fragrant Spirit of Life” showed an 8-year-old girl fetched water to bathe her younger siblings who were dying of hunger.

Two or three people walked out during the video.

After the film, Weiss took to the mic and explained the simulation to the attendees.

“Who was pissed they didn’t get their steak dinner?” Weiss said, and the crowd called back roaring.

Students expressed their reactions during an open mic session.

“At first I was pissed, saying let’s get up and leave, and now after the video I feel like a total ‘B,’” said Elisa Ruiz, 25, “Thank you for presenting it this way, because no one would have shown up if they knew right away and if they did it would have had less of an effect.”

Miriam Neal, 18, said she was upset at first that it was not a bible study, but then was pleased that there was food and appreciated the message.

“I’m sad because I’m still hungry, and I know in reality, I‘m the people up there with food,” Cruz said.

The event put him back on track, he said, and on the path of not wasting food. He had previously taken part in a 30-hour famine to share in the experiences of poorer people around the world.

About 10-15 volunteers from Unified We Serve and African Student Organization hosted the event, which cost about $5 for each of the estimated 250 people in attendance, Weiss said at the close of the event.