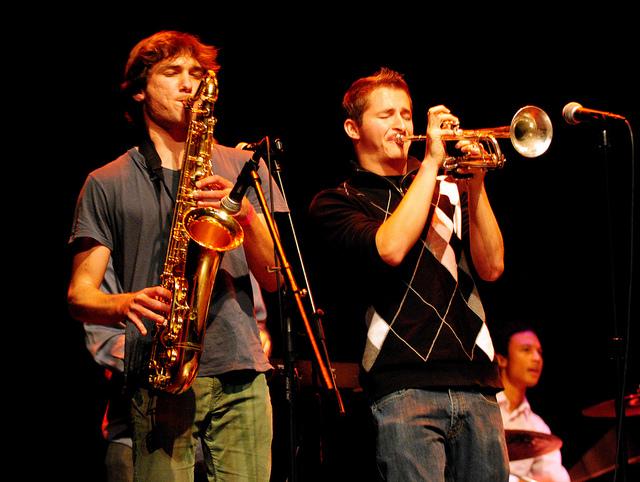 An estimated 313 students came to help choose the winner by judging the performances and voting via an American Idol style text submission system, which was left open until 10:30 p.m. after the show.

The four finalists were meticulously chosen from the 70 artists that entered, said Aaron Class, director of marketing for Five of Five.

Also at the event was CSUN Hip Hop dance team, which performed during intermission, and Juan Carlos Alvarado, a.k.a. DJ Vinyl Fantasy, who kept the show going through the breaks. Master of ceremony Devon Johnson, 29, was also on hand and kept the crowd laughing with his banter and an impromptu trivia game.

Backstage, finalists prepared for their set and talked about what this opportunity meant to them, and how they got here.

“We’re in the top four and we are super excited,” said Lawrence Carol, 21, guitarist for Monroe. “We have the music part under control – we just need the guidance and need to know what we need to know to grow.”

Monroe has previously played on campus and have also performed around Los Angeles, Hollywood and Santa Monica.

Cameron Hovsepian, 22, who despite being from Los Angeles, said his biggest influence is “the soul of the south in the 1960’s”.

Hovsepian’s band mates were booked for the night of the showcase, so he took to the stage in one of the more interesting performances of the night. His performance involved a loop station replicating his band’s instrumentals and vocals, giving him the sound of an entire band.

“I’m not one to sell my own music, so if I win this will be a bit of a push for that,” said Hovsepian, who was surprised he was chosen out of the applicants and  impressed how professional the student-run production was handled.

“It’s unbelievably organized, they are on top of everything,” he said. “They are students and it’s just pretty impressive to see.”

Free Food, who just released an EP on Oct. 17, said they heard about the contest through a Facebook invite.

“We weren’t expecting anything to come out of it,” said guitarist Antonio Rodrigo, 21.  “I just got a Facebook message from a friend and we did it, so this is pretty cool.”

Free Food played a fusion of hip hop, funk, and jazz and showed themselves to be true performers as trumpet player Daniel “Rib Eye” Richman, 22, played the entire set with a visibly burned right hand, which he mentioned he injured while cooking before the show.

Adrianne “Aeb” Erin Byrne, 25, who came from Pennsylvania at the urging of Randall Sprague, director of production for Five of Five, said she was thrilled when she found out she was in the top four after entering on a whim.

“I love collaborating with people and the outside input will be a benefit,” Byrne said.

Before her set, Byrne moved into her first song with a tale of her experiences in L.A. and with a deranged woman she met riding the 217 bus, saying sometimes we have conversation with ourselves.

Her flute solo livened up the crowd, as she was the first to perform.

After the show, guests were shown how to vote as the artists set up their Meet and Greet stations. The voting will be tabulated through Thursday with the winner planned to be announced Friday Nov. 4 on the Five of Five website.