W-Vball: Matadors not surprised with obliteration of Aggies as they inch up in Big West standings 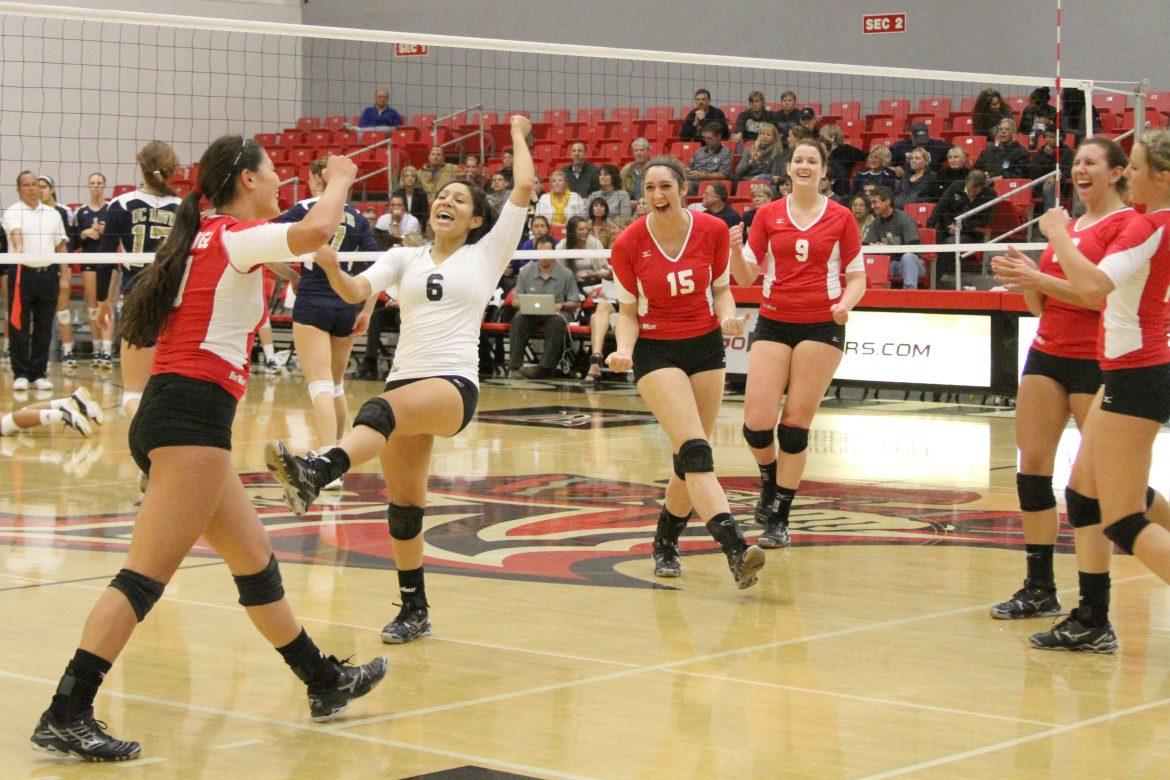 Following the Matadors’ 3-0 dismantling of 20-win Big West Conference rival UC Davis at the Matadome, CSUN head coach Jeff Stork was asked about the ease with which the his team repelled the Aggies Friday night.

His response made it seem like the remarkable night was just another day at the office for CSUN (12-11, 6-5 Big West).

“Not surprised at all,” Stork said of his Matadors hitting a blistering season-high .465 and dominating UC Davis thoroughly.

“Wow, I didn’t know that,” said a wide-eyed Hinger when told of her hitting percentage.

Despite the amazing level of offense on the night, Hinger’s reaction to her own production was the most astoundment anyone on the Matador side expressed following their performance. Opposite hitter Natalie Allen, who also had 12 kills, stopped just short of saying the showing was expected, and credited CSUN’s scouting of UCD for the result.

With how badly UC Davis was kicked around, one could say Stork’s degree of scouting on the Aggies was almost like cheating.

“Our scouting report was dead on,” Stork said. “Although we only wound up with five blocks, we had a ton of control blocks and our defenders were in the right spot when we gave them (UC Davis) an open net.”

UC Davis’ only shot at winning anything on the night came early in the match as Matadors and Aggies found themselves close late in the opening set. CSUN had kept UCD at bay for most of the frame, but a pair of Aggie blocks on Allen put them within 22-21

But Allen giveth and Allen taketh away. The opposite hitter’s following two kill attempts went down and CSUN won the match, 25-23.

“They (UC Davis) were blocking me a lot so I was figuring out where to hit around them and I found tips and shots a lot,” Allen said.

By the second set, there was no stopping Allen. The Matadors led from wire to wire behind her six kills, building an advantage as big as 10 points. UC Davis outside hitter Devon Damelio, who had carried her squad with seven kills in the first set, only had two in the second as CSUN punished UCD, 25-16.

The third set belonged to CSUN outside hitter Mahina Haina. She had seven of her game-high 15 kills in it. More importantly, Damelio had no part of the Aggies’ eight-kill effort in the frame as her team was finished off with a 25-17 defeat.

Aggie outside hitter Allison Whitson, the No. 6 kill getter in the Big West who averages 3.63 kills per set, was limited to five and hit .045 for the night.

“We shut her (Whitson) down. She was not their star tonight,” Hinger said. “She had no answers for us. She couldn’t work around us.”

And while CSUN wasn’t surprised at how well it played on the night, players admitted the sustaining of such a high level of play throughout an entire match was something they hadn’t done before UCD came into town.

“This is the first time we’ve actually finished games,” Hinger said. “We completely, consistently stayed with this high momentum and this great volleyball.”

CSUN will have less than 24 hours to enjoy its proficient win. Pacific is up next on the schedule Saturday night. How tough will it be for the Matadors to still be firing on all cylinders then?

“It’ll be very easy,” Hinger. “We have so much momentum.”