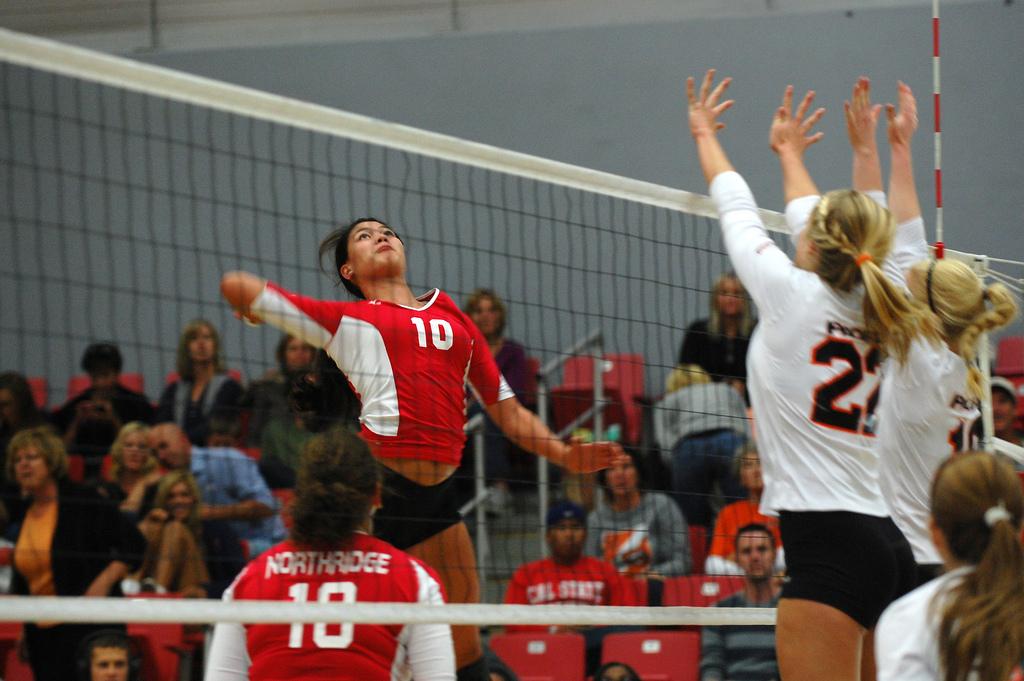 CSUN outside hitter Mahina Haina was having one miserable game and referee Rick Olmstead wasn’t helping her state of mind.

With the Matadors leading 1-0 and ahead 26-25 in the second set of their Saturday night match-up against Pacific, CSUN setter Sydney Gedryn put down an apparent set-winning point to the opposite side’s deep corner. Haina, her teammates and most of the Matadome started to celebrate. Olmstead, however, blew his whistle, called the hit out of bounds and overturned the point.

An irritated Haina looked at Olmstead and yelled, “C’mon!”

“It was a really tight game, that point would have made it much easier,” Haina said.

Trouble-free, it was not. But CSUN (13-11, 7-5 Big West) and Haina managed to overcome the hurdle, won the set 33-31 and went on to sweep the Tigers for their fifth win in the last six games. The victory put the Matadors in second place in the Big West Conference along with UC Santa Barbara.

Haina’s minor outburst could have had something to do with her subpar start. The outside hitter had six attack errors and hit -.308 in the first set. She added two more errors in the second, but also had five kills to help the Matadors repel the pesky Tigers in the critical frame.

“She (Haina) was coming in early,” CSUN head coach Jeff Stork said. “(Gedryn) was giving her a normal set, but it was a little bit too slow for what her timing was.”

CSUN led 24-21 before Pacific crept up on it and sent the game into extra points. Behind Megan Birch’s 12 kills in the frame, the Tigers even went ahead, 31-30.

The Matadors, however, went on to score the next three points to take the win and a 2-0 lead into intermission as the home crowd of 437 exploded in an eruption of cheers.

“We won when it mattered, that was a clutch moment for us,” said CSUN middle blocker Casey Hinger, who had 11 kills and hit a team-high .364.

The Matadors, who hit .244 for the game, had large leads in every set. In the first, they led by as many as five points before the Tigers came roaring back and took an 18-15 advantage thanks in part to 12 attack errors and five service errors from CSUN. The Matadors then responded with a 10-5 run to take early command of the match.

The third set was the only frame in which CSUN didn’t have to sweat a win down to the wire. The Matadors led by as many as eight points and finished Pacifc off with a 25-17 victory.

“We’re winning in a lot of different ways,” Stork said. “And certainly that wasn’t our best performance, but we won and that’s what’s most important.”

Haina, the Matadors’ kill leader at 3.34 per set, added five more kills in the third set to bring her total up to 12, a team-high along with the 12 from Natalie Allen. Haina improved her poor early hitting up to .125 by game’s end.

“Volleyball’s 95 percent mental as people say,” Hinger said of her teammate’s early struggles. “Sometimes that stuff happens, but all that matters is that she pulled it out in the end.”

In the end, Haina – who kept her composure for most of the match – was all smiles.

“Everybody gets heated in the game,” Haina said, referring to her small exchange of words with Olmstead. “My adrenaline was running and I didn’t necessarily say anything bad, I just said … stuff.