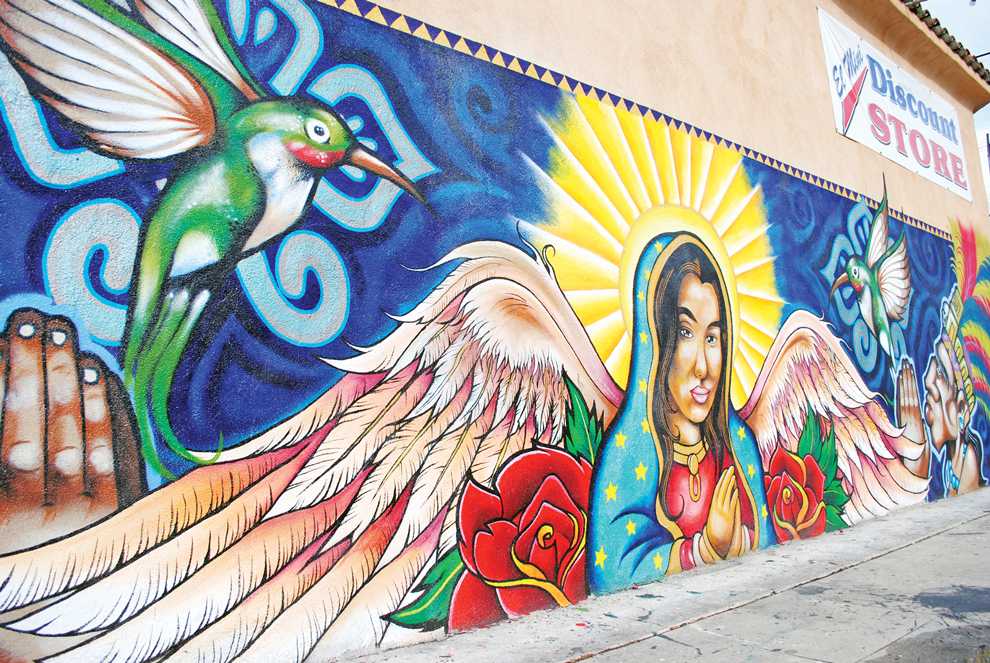 The Los Angeles City Council has decided to revise the current law on murals to allow more freedom to those who wish to have a mural on their private property. A colorful mural occupies the side wall of Juan M.'s El Mini Discount Store/T-Shirt Spot. He say's it has been up for the past year and has not had any problems with the city or taggers that would always write on the wall on a daily basis. Photo Credit: Andres Aguila / Daily Sundial

The city put a ban on private property murals in 2002 after outdoor advertising companies sued the city council for regulating signs, but not murals, said Rick Coca, spokesman for District 14.

These regulations became tightly enforced between 2006 and 2007.

Before this time, there wasn’t any ordinance on murals but there was a law governing signs and billboards, Coca said. Billboard companies argued this wasn’t fair because it was too difficult to distinguish the difference between signs and murals.

Now, any type of sign is not allowed on private property, but publicly funded murals are OK, said Coca.

Los Angeles used to be known as the mural capital of the world before the 2002 regulation went into effect.

“This ordinance will allow murals to flourish again,” Coca said. “There is a big interest in how this plays out.”

Murals in the Southland started primarily in the Chicana/o movement in the 1970s and 1980s, said Larry Oviatt, CSUN art professor.

“I find it delightful to pass by,” he said. “If there’s an ugliness about a cement wall you keep driving along and you paint a mural on it, you pay attention to it. It becomes a part of the landscape.”

What an individual landowner chooses to do with their property is their right, Oviatt added.

“If you want to paint your house chartreuse and everything else is brown and grey in your neighborhood, you should be able to do that,” he said.

The revision would allow murals to be painted on private property again after distinguishing them from advertisements and billboards.

District 14 Councilmember José Huizar allocated $20,000 to local artists in 2008 to create a mural in Ramona Gardens’ Community, according to a press release from that time. Because the mural was city sponsored and on public land, it wasn’t against the regulation.

The new L.A. City Council Planning Commission is working on this new ordinance for murals and looking into creating one for signs, Coca said.

Martinez said murals should be allowed on private properties, but there must be a clear distinction between ads and murals.

Oviatt said what defines a mural as art as opposed to an advertisement or sign is if there is a logo embedded into it or it features a specific product.

“They don’t need to have that on the sides of buildings or fences unless they want to support the mural or artist,” he said. “They have taken away a lot of billboards, which I agree with. I don’t think we need to have all of those.”