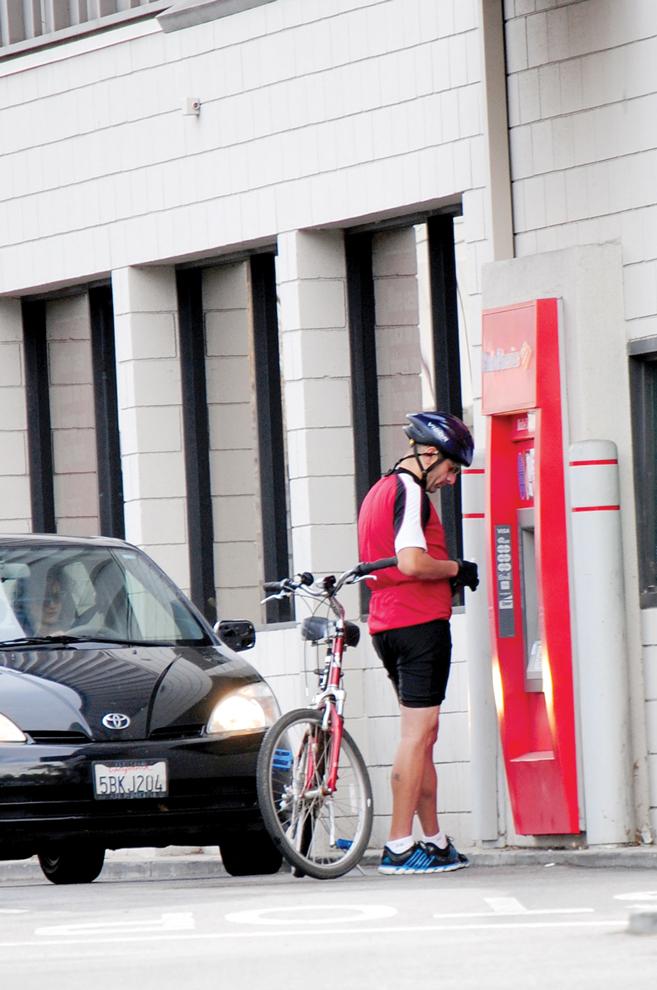 A bicyclist uses the Bank of America drive-through ATM machine. Bank of America has recently decided to not charge $5 a month to customers who use their debit cards that would have started in 2012. Photo Credit: Andres Aguila / Daily Sundial

Bank of America has abandoned a monthly $5 debit card fee, which was scheduled to begin in early 2012.

The announcement came after competitors, namely Wells Fargo and JPMorgan Chase, announced they were no longer going to exact similar fees.

The bank cited customer feedback and a changing competitive marketplace as the reason for the bank’s “change of heart,” according to a Nov. 1  statement.

“We have listened to our customers very closely over the last few weeks and recognize their concern with our proposed debit usage fee,” David Darnell, co-chief operating officer, said in the statement. “Our customers’ voices are most important to us. As a result, we are not currently charging the fee and will not be moving forward with any additional plans to do so.”

Bank of America has been at the center of consumer anger over the past couple months after announcing in late September that they were thinking of implementing the monthly debit card usage fee.

An estimated 650,000 consumers have joined credit unions since the $5 charge was announced Sept. 29, according to the Credit Union National Association. This increase was massive compared to the estimated 600,000 consumers who made the switch in the whole of 2010.

A new federal rule went into effect Oct. 1 limiting the fees banks can charge merchants when debit card purchases are made.

New limitations are expected to cost banks an estimated $6.6 billion a year in revenue beginning in 2012, according to Javelin Strategy and Research. The initiation of debit card purchase fees were part of an effort by banks to recover some of those losses.

The news of the fees sparked consumer outrage, with thousands of consumers pledging to move their money out of big banks, according to CNN.

A poll conducted by the National Foundation for Credit Counseling showed 62 percent of consumers said they would leave their bank if it began charging for debit card transactions.

In opposition of the new fees, consumers have turned to the Internet to campaign against major banks and their fees.

“Bank Transfer Day,” started on Facebook by small business owner Kristen Christian, signed up more than 80,000 people who pledged to transfer their monies. “Bank Transfer Day” was scheduled to take place Nov. 5, and has received much support from Occupy Wall Street protesters.

Molly Katchpole, a 22-year-old woman from Washington, D.C., launched an online petition on Change.org  opposing the debit fees, and has collected over 300,000 signatures. The petition beseeches Bank of America to “do the right thing” and reverse its decision to charge consumers for their debit card usage.

It is not entirely clear whether Bank of America revoked the fee in response to consumer outrage or because the massive bank was left alone in the consumer hot seat after other major banks decided the week before to dismantle their fees.

Bank of America “listened to customer feedback and decided not to implement the fee,” Anne Pace, Bank of American spokeswoman, said in an email.

Despite the fee recall, some remain convinced that big banks will continue to try to raise revenue through the implementation of fees.

Analysts also suspect that banks will attempt to make it harder for consumers to avoid checking fees by raising minimum balance requirements.

“The debit card fee was only one of several different levers that banks can pull,’’ McBride told the Boston Globe. “Consumers should continue to be vigilant about the prospect for new and higher fees.’’