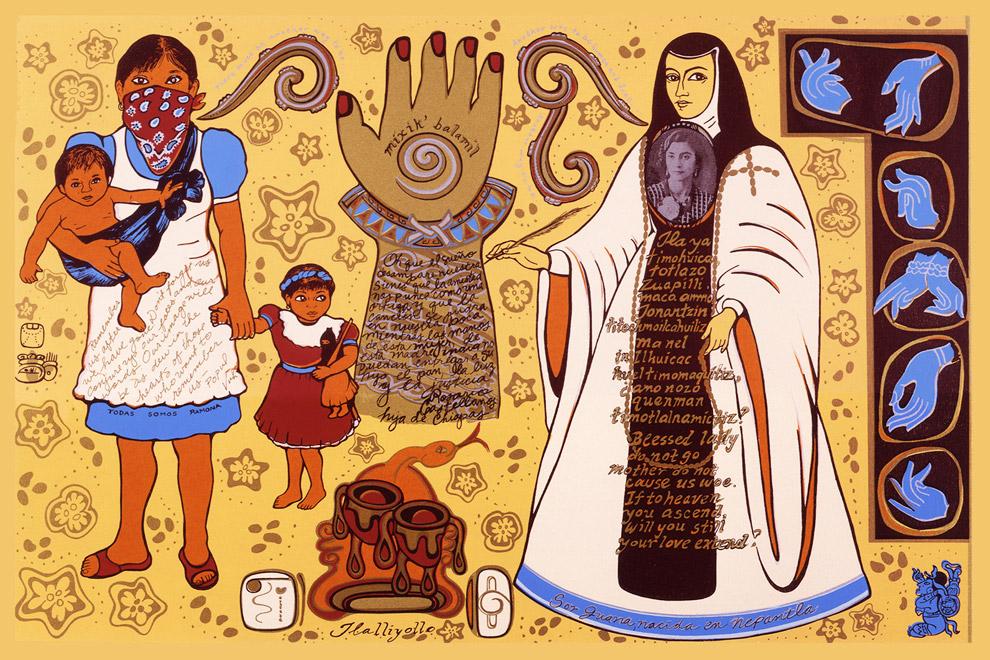 Growing up as a self-identified Chicana, Yreina Cervantez had little inclination that her childhood circumstances would eventually lead her into the Chicana/o movement and her position in the Chicana/o studies department at CSUN.

“Art is a powerful tool for transformation,” said Cervantez who immersed herself in the growing arts community. She said the collective spirit at Self Help Graphics was very dynamic and became a creative hotbed for artists during beginning of civil rights in the Chicana/o Movement.

It can be hard to find one’s identity in a male dominated movement, that is why she values her close solidarity with fellow female chicana artists, said Cervantez. These friendships also help to influence her work.

“Women have not been very visible in today’s art,” she said. “And if they have, they are portrayed very stereotypical. These pieces talk about the dignities of women and their strengths, while reclaiming a sense of empowerment and agency.”

That being said, Cervantez certainly wants to make clear that, the symbolism in her art is not a reaction but a thoughtful response.

Cervantez spent six years at Self Help Graphics, a non-profit in LA that supports community art. Self Help was more than just a company; it provided a platform for artists to support Chicana/o art, especially when there was little support in 1979, according to Cervantez.

Cervantez is a community worker and a painter in academia. Her work is currently being exhibited at the Fowler Museum in UCLA as a special show entitled “Mapping Another LA: The Chicano Art Movement.”

The exhibit began Oct.16 and continues until Feb. 26. “Mapping Another LA” is part of a larger project “Pacific Standard Time” that showcases Californian art from 1940s to 1980s. Cervantez’s work also has a reoccurring appearance at the Latino Museum located in the heart of downtown L.A.

When asked about showcasing her work, Cervantez offered humble gratification. Displaying one’s work is the goal as a working artist, Cervantez said.

“My work has been shown for over 30 years, but it’s always gratifying, definitely a sense of affirmation,” she said.

Cervantez is a third-generation Mexican who spent her childhood in the American Midwest and Mount Palomar in mostly rural areas culturally polarized. When her family moved to Orange County, the conservative attitude, according to Cervantez, influenced her to become part of the Chicana/o movement.

She credits her mother as an original inspiration of her painting career, as she was creative and artistic even though her mother was not necessarily an artist. Nonetheless her mother’s inspiration was absorbed by osmosis, helping propel a natural talent in Cervantez whether it was painting or drawing.

Cervantez paints in all mediums, but fine tuned her watercolor skills during her upbringing. “In high school, my art started to develop and so did my consciousness,” she said.

With her heart and skills in art, she went to college and received her undergraduate degree in the medium.

“I wanted to put my education to use; my education is not just in academia but also in the community,” said Cervantez.

Her first job as a resident artist involved working with local youth under the Social and Public Arts Resource Center in the murals department. To Cervantez it was a form of social justice, a way to serve the community through art.

Although the arts may sometimes be seen as a spontaneous event, the Chicana artist infuses research into her thoughtful responses during her creative process.

“Meso-American mythology inspires a lot of my work, by drawing from the past to apply to the contemporary,” she said.

Cervantez said she envisions her pieces a certain way, being an organic process though unanticipated things can happen. She enjoys the twist and turns “because the creative process is a combination of intellectual and visceral responses,” she said.

Art is not just a personal experience that resonates individually, but an opportunity to inspire change, which is why Cervantez decided to teach at a college level. It is a perfect opportunity to impact younger students at a more meaningful comprehensive and influential way, Cervantez said.

Cervantez said there is a lot of activism now in today’s younger generations, especially during the social unrest. And she feels responsible in teaching students a comprehensive and informed look at activism through Chicana/o art. Even if that means taking on the continual challenge between balancing painting and teaching.