CFA officially announce one-day strike to be held next week 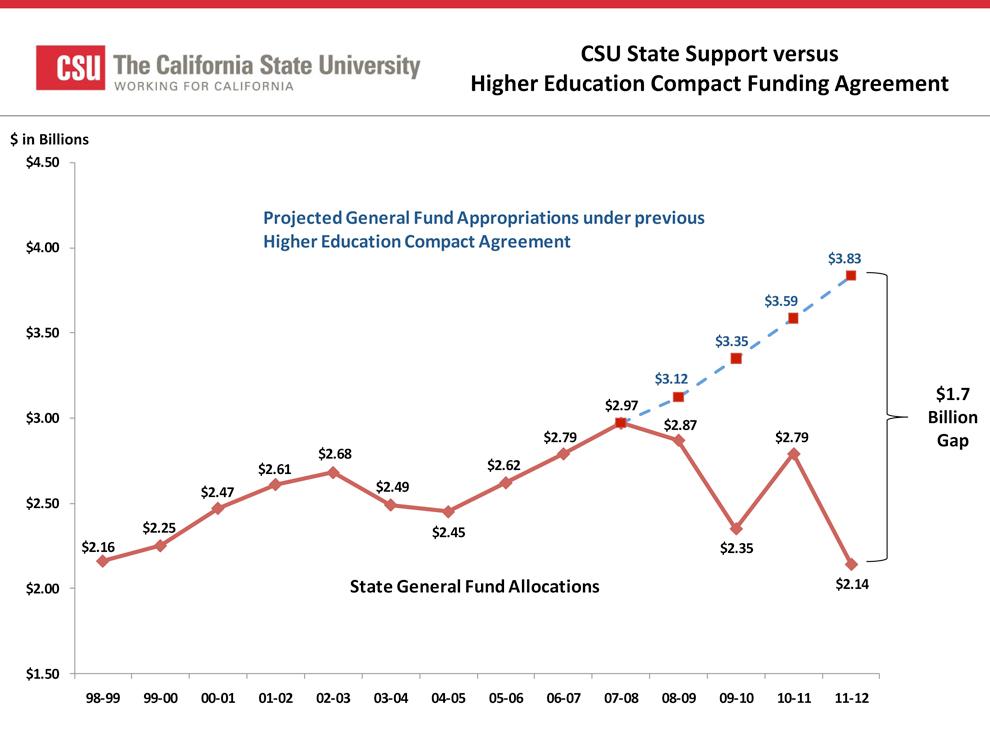 Under the Higher Education Compact Agreement promised by former Gov. Arnold Schwarzenegger, state funding would have increased by nearly $1 billion over four years. Instead, the promise wasn't kept and funding began to be cut from the CSU. Courtesy of calstate.edu

CSU faculty voted Monday in favor of a one-day strike on Nov. 17 at East Bay and Dominguez Hills campuses.

There has never been a labor strike since collective bargaining began in 1983, according to the California Faculty Association (CFA), the voting entity.

Faculty will protest an unfairness in pay structure. Those who have worked in the CSU system for several years are being paid less than many newer faculty members, said CFA spokeswoman Alice Sunshine.

Faculty are fighting for a fraction of one percent of CSU’s $5 billion annual budget, Taiz said. That total equals $20 million for the first year, then $10 million each following year to maintain equality in pay.

“Not everyone would get a raise,” Sunshine said. “The $20 million would be to fix inequity.”

But CSU officials said they don’t see an easy solution to finding the $20 million.

Taiz said the CFA will look at additional strikes in the Spring semester if the CSU doesn’t respond to the Nov. 17 picket.

“If necessary, we are willing to escalate the issue,” Taiz said.

Fallis doesn’t see what will be accomplished by the strike.

“I don’t know what the expectation would be,” Fallis said. “The financial situation remains the same.”

The CSU points to a series of events that took place on the state government level that have create current negotiations.

A three year contract went into affect in 2007 and was negotiated around a promise, the Higher Education Compact Agreement signed under former Gov. Arnold Schwarzenegger, that would provide the CSU with nearly $1 billion in state funding.

The increase in funding was meant to cover mandatory costs, including salary raises and health benefits, and grow student population, Fallis said.

If the promise wasn’t kept by the state, faculty raises could be reopened and taken off the table by the CSU, and the state delivered on neither of them, Fallis said.

Because of this, the raise that would have closed the inequity of faculty pay was rescinded by the CSU.

CFA will hold informational picketing at the Sierra Center from 12 p.m. – 2 p.m. today.