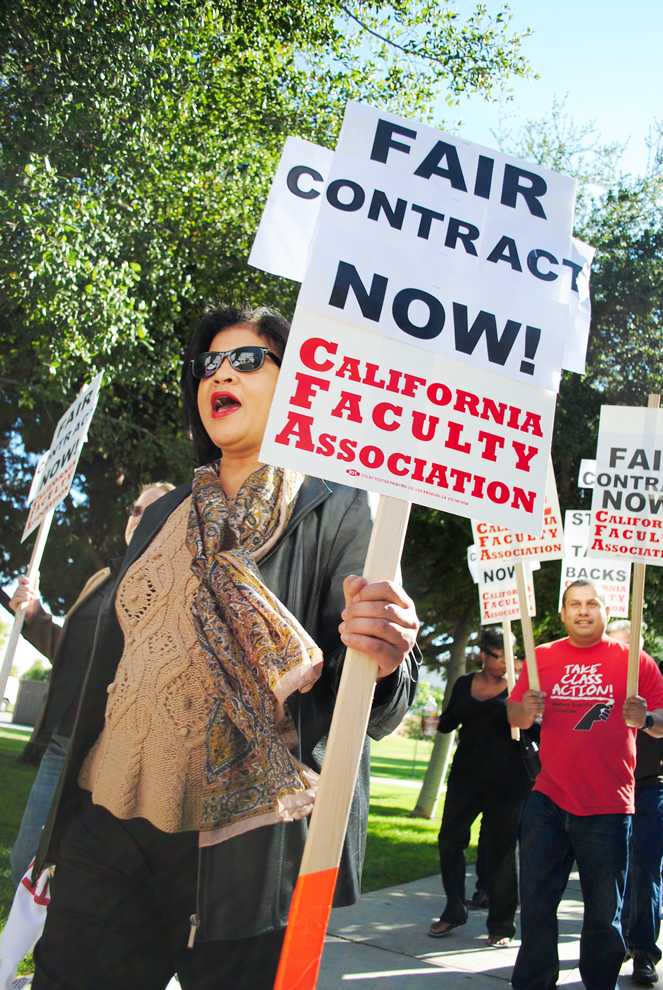 A fair contract and salary adjustments brought out a group of CSUN faculty members and a few students for an informational picket Tuesday afternoon.

The picket, with about 30 to 35 participants, was organized by the California Faculty Association (CFA), with CSUN chapter president Nate Thomas leading the way.

“It’s very simple. The faculty has not been treated with respect and we need a contract,” Thomas said. “We’ve been operating since June 30, 2010, without a contract. We’re operating on the old contract as we try to negotiate a new successor contract. So what we want people to take away is, enough is enough.”

Thomas, a CTVA professor at CSUN, said he didn’t want to have the informational picket, but the situation has come to a point where action needs to be taken.

The informational picket was only the first phase, with a Nov. 17 strike planned as the major action CFA will take against CSU.

Southern CSUs will gather at CSU Dominguez Hills, while northern campuses will convene at CSU East Bay. Both campuses will be closed for the strike, Thomas said.

“I have friends who are adjunct professors at other universities outside of (the CSU system) that are running into the same problems that the Cal State is having,” said Jeff Woodruff, a history major who participated in the march. “In combination with the budget cuts and reduced classes, they’re able to keep these professors at a lower pay rate right now, just due to the economy and that’s not fair. This isn’t the NBA.”

Woodruff agreed with the CFA that the issue is about the education of students.

“This isn’t about making money. This is about educating the students and the future generation. If we can educate the future generation, they’ll make all the money,” Woodruff said. “We don’t have to worry about that. But unless we invest in that, it’s not going to happen.”

Dr. Rob Kent, department chair of urban studies and planning, joined the picket in solidarity with his fellow faculty members.

“Many professors at this university struggle mightily financially because of the very low salaries that are paid here,” he said. “Students are often unaware of how poorly paid the professors are, especially part-time faculty.”

There was a mixed reaction among students who witnessed the informational picket.

“I feel bad for them, but they’re not going to get very many concessions in the economy right now,” said David Weber, an accounting major. “Whether it be from the tax payers or from the university, all the money’s dried up.”

“It’s kind of awesome actually,” she said. “They need to stand up for all these cuts that are happening. I wish there were more students involved, but I thought it was pretty cool. It was loud and it got my attention.”