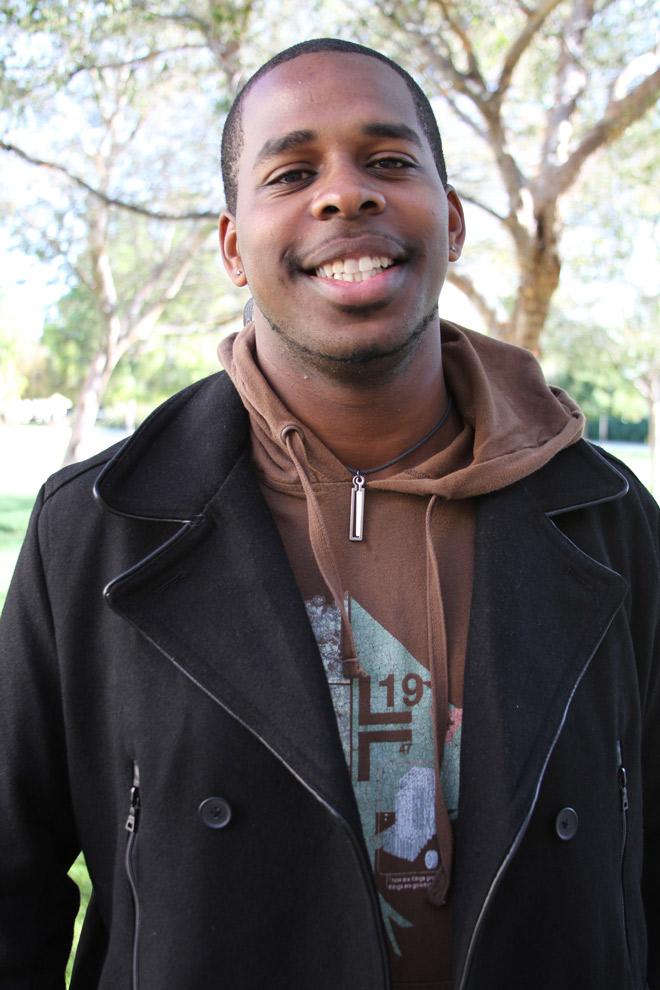 Despite the fact that social welfare major Martel Okonji, 22, is up to his neck in homework, he refuses to take a moment to sit down and relax.

In his final year at California State University, Northridge, he is active in many organizations on campus, but they’re all inclusive to his major. Okonji has overcome adversity and depression and has blossomed into an active member of the LGBT Alliance, the Queer People of Color Conference, and The LGBTQ Ambassadors.

After struggling with his personal identity as an African-American gay man, his life has taken a 360 degree turn, which he credits the support of his friends and CSUN’s TAKE program.

“The thing that drives me the most is smiles,” Okonji said. “I know when I first started school, I was literally not smiling. I was dropping out of everything, it was like shit to me. But I realized how good it felt to smile; how good it feels to laugh. When I see other people smiling, it just makes me say, ‘wow,’ it does makes a difference. It makes me feel good to make someone smile, especially when I’ve had my shitty days.”

The outgoing Okonji has not always been so communicative. He moved to Northridge from Upland, a city in San Bernardino County with his former partner for his freshman year of college. After finding out that his partner was cheating on him, Okonji fell into a depression. He was alone and unsure of why he was even attending CSUN.

“Let’s just say I was actually failing in life,” Okonji said. “I started to take the easy way outs: alcohol, sex, drugs. I didn’t know anyone and I couldn’t talk to my family about it cause they weren’t okay with me being gay.”

It wasn’t until the day Okonji’s friends found him trying to cut himself that an intervention occurred. With help and support from his friends and eventually his family, Okonji began to get involved with groups on campus and started to find his calling. He used the clubs and organizations as therapy to help him get past the violence he felt.

According to Okonji, people need to start listening to one another.

“Listen to your community, your friends, it will create peace,” he said. “Let words be our peace and violence be our lesson, that’s what I live by.”

Okonji is doing his best to listen to his community and not only reaches out to students on campus but students at other colleges and high schools in the area.

He is also a part of the leadership council as a co-coordinator for the Peer Health Exchange created to help educate public high school students on relevant health-related information.

Members have developed a curriculum for an interactive lecture that they present to students. They teach about pregnancy prevention, rape and sexual assault, sexually transmitted diseases and HIV. Okonji recalls that in high school he didn’t pay attention to sex education class because he figured it was for straight people.

“I didn’t know what a condom was until I got to college,” said Okonji, who feels that the program is much-needed. “I met this one little kid that asked me, ‘When you’re having oral sex, do you use one condom or two?’ and I had to let the kid know that it’s probably always best to only wear one.”

The reason Okonji stays active is because he eventually plans to give back to the community around him.

“I want to dig deep in community organizing and social reformation,” he said. “I almost feel selfish, because when I make someone else smile it really does make me smile. Like I’m giving to get it back.”