Reasons for unit caps explained by CSUN and CSU officials 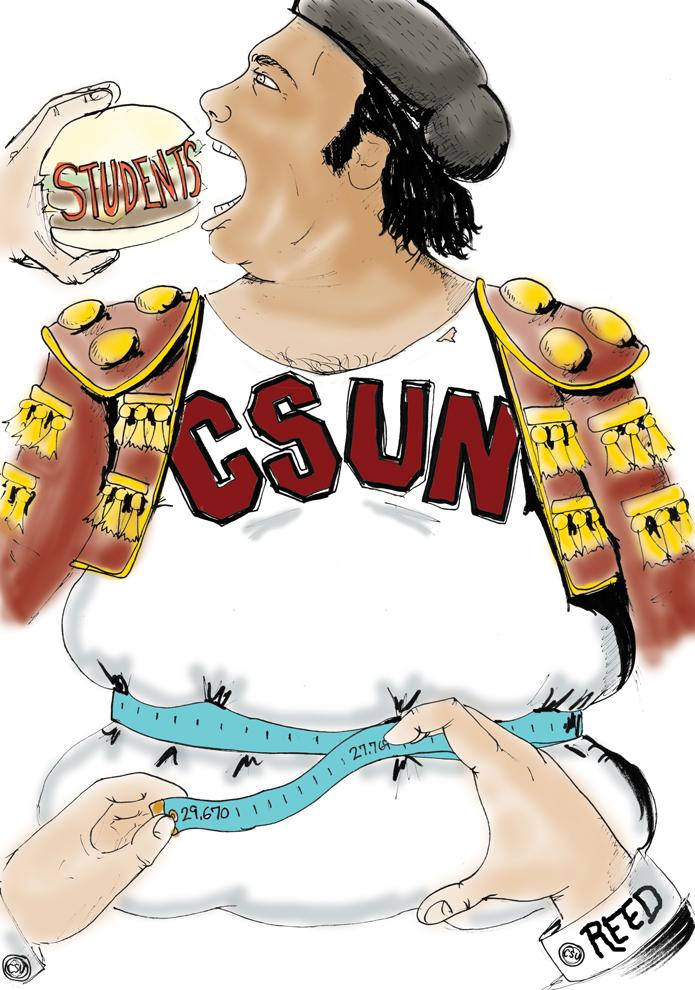 The decision to tighten registration rules was implemented to avoid a $7 million penalty from the CSU by reducing students’ unit loads, according to campus officials.

If CSUN does not scale back to Spring 2011 levels of full-time equivalent students, the campus could incur a multi-million dollar penalty. Without that threat, there would be no need for the unit restrictions, said CSUN Provost Harry Hellenbrand.

“We have the money,” he said.  “We would be able to support (these) students if we aren’t penalized.”

An increase in full-time equivalent students and a rise in average unit loads are to blame for the spike, Rawitch said.

“Despite fall enrollment controls, we had more freshman and transfer students than we hoped to have,” Rawitch said.

CSUN accepted its largest freshman class yet, with 5,200 first-year students coming to campus in Fall 2011.

Now the campus is looking to decrease its number of full-time equivalent students by about 4,000, according to academic affairs documents.

That figure does not represent real students, however. A full-time equivalent student is a statistical category, Hellenbrand said, calculated by multiplying the number of enrolled students by the total number of units they take and dividing that number by 30 units, a full-term load.

Not only does CSUN have to decrease full-time equivalent students for the Spring semester, the campus must also make up for the Fall overage, Rawitch wrote in an email.

“We need to get as close to 100% of target as we can,” she wrote, adding that CSUN is aiming for fewer full-time equivalent students because some areas will have more than they should.

Exceptions to the rule

According to the campus-wide email, graduating seniors are exempt from the 15-unit cap, but other students were encouraged to choose their classes wisely and make every unit count.

First-time freshmen, disabled students, deaf and hard of hearing students, and some cohorted students are also exempt from the restriction that allows non-exempt students to register for 13 units in the first wave of registration and another two units during open registration, or the second wave.

Students will be allowed to petition with their college deans for exemptions, but they will be rarely granted, Hellenbrand said.

Similar cut backs and restrictions were implemented two years ago, he added

It is unclear how long the new restrictions will be enforced, but the matter will be revisited next semester when campus officials decide how to conduct freshman registration in May, Rawitch said.

“It’s a foolish thing to do”

If students take 15 units each semester, they should graduate within four years if all of those classes were necessary and appropriate to their degrees.

Campus officials are unsure how the new restrictions could affect these figures, but Hellenbrand said it could be detrimental.

“It’s a foolish thing to do,” he said.  “It (could) discourage graduation.”

The CSU has requested a 5 percent system-wide enrollment increase be included in next year’s state budget, said William Watkins, vice president of student affairs. Negotiations for that request should begin in January when Gov. Jerry Brown proposes a new economic outline.

Until then, the CSU is clamping down on campuses that have exceeded their target enrollment.

Political theory swirling in California’s higher education suggests if campuses can show they have fewer full-time equivalent students, then they can ask state policymakers for more money to boost their numbers, Hellenbrand said.

“(This has not worked) in my lifetime,” he added.

Officials in Long Beach said because the chancellor decided not to increase tuition in the spring, campuses were left responsible to replace and sustain revenue.

CSU’s Fall 2011 tuition increased 12 percent after the system took a $650 million blow to its budget from the state.

“There was no other way to get the failed revenue,” said Stephanie Thara, CSU spokeswoman.

CSUN’s decision to handle its finances with unit caps and shrunken classes was a campus-specific one, Thara said.

California’s university systems could be hit with an additional $100 million cut in January if state revenue does not meet projections, but Thara said this looming cut is unrelated to CSUN’s need to scale back.

Campus officials announced last spring that CSUN would accept spring transfers, and that will not change with the recent rule since those new students have already been notified, Hellenbrand said.

Change could, however, come in Fall 2012, when campus officials must reevaluate their targets and determine if supporting transfer students is in CSUN’s budget.

CSU’s Fullerton, San Diego, San Jose and San Luis Obispo have all declared impaction, meaning their campuses have met capacity and closed to new students, according to the CSU.

While CSUN has not had to lock out potential students, Hellenbrand said that option may have to be considered.