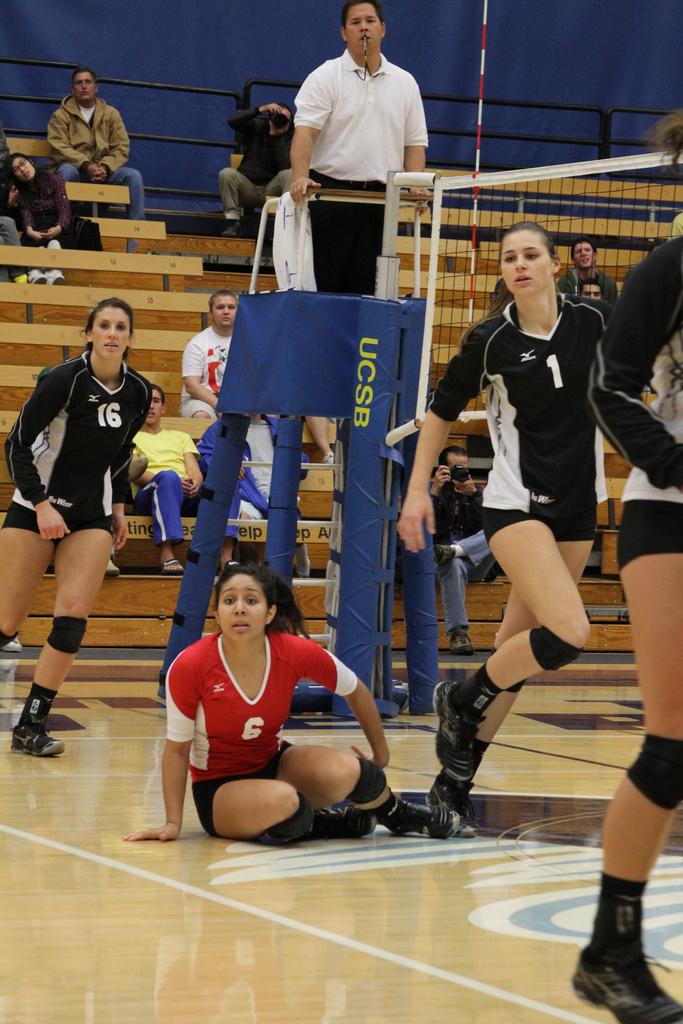 Alonso Tacanga
Santa Barbara – Trailing 1-0 and down 23-17 in the second set, CSUN decided it was time to make its move Wednesday night at the Thunderdome.The Matadors scored four of the next five points, drawing them within 24-21 of UC Santa Barbara. Then they got a block, making the Gauchos cringe on the floor at the thought of a possible collapse.

The cringing didn’t last long, however. The block was waved off almost immediately due to a touch of the net by a Matador. The point instead went to UCSB, which won the set, and eventually the game, 3-0.

“We had a slow start, we started figuring things out a little too late,” said CSUN outside hitter Britney Graff, who led the Matadors with 10 kills.

The at-the-net call was only one of a handful of incidents gone wrong for the Matadors (13-12, 7-6 Big West), who only managed 33 kills in contrast to UCSB’s 48 for the game. In a match that counted for sole possession of second place in the Big West Conference, the renowned Gaucho defense prevailed over CSUN’s recent hot hitting.

UC Santa Barbara (15-11, 8-5) shut the Matadors down offensively, only allowing them to hit .116 for the game. Even when it seemed like CSUN – which had hit .355 over its past two games – was starting to turn things around, the Gauchos remained calm, knowing their defense would get them out of the hole.

The Matadors started the third set by scoring five of the first six points. Then the Gaucho defense steadied itself, allowing UCSB to get back in the game.

“Santa Barbara is known to be a very great defensive team,” said CSUN middle blocker Casey Hinger, who had seven kills. “We just had to put more balls down.”

The match looked very competitive early on as Matadors and Gauchos battled toe to toe for the first half of set No. 1. Tied at 9-9, however, UCSB used a 16-7 run to finish off a CSUN team desperately looking for a way to put down a kill.

Making matter worse for the Matadors: on top of its defensive effort, UCSB was also hitting lights out. The Gauchos hit .311 in the first set and .286 in the second (.224 for the game).

“They’re a good team. We were tied (in the standings) with them for a reason,” Hinger said. “We just needed to shut them down a lot quicker than we did.”

The Matadors slowed UCSB down in the third, only allowing them to hit  .082. The problem lied in their own hitting: .020 for the frame.

The good news for the Matadors was that the loss doesn’t put them out of reach from second place in the conference, especially since they have another meeting with UCSB coming up on Nov. 18 at the Matadome.

While the match at UCSB wasn’t the most positive of experiences for CSUN, at least one Matador is looking forward to the rematch in Northridge.

“It’s a bummer. This was a really big win that we needed,” Hinger said. “They played really well against us, but we’re going to kick their butts next time around.”