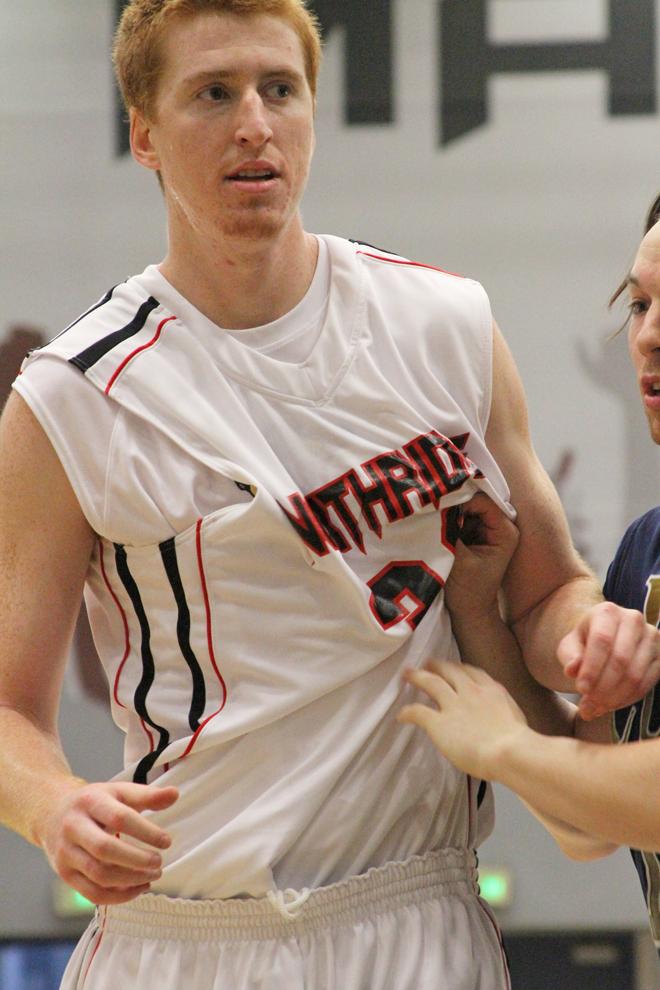 CSUN center Ari Feldman had seen the bright lights before. The roaring crowds. Their loud cheers following the punishing of an impotent rival.

It was all so familiar for Feldman Saturday at the Matadome as CSUN blew out Cal Baptist 86-51 in exhibition play. The only difference was the missing net in the middle of the court.

In its place, two basketball hoops had been placed at each end.

Feldman, a former middle blocker for the CSUN volleyball team who now wears No. 32 on the basketball team, figures he’ll get used to it. He just needs to get his feet wet.

“It was my first game,” said Feldman following his first real action at the Division I basketball level. “Maybe I had a little bit of nerves in my legs. All my shots were coming up a little short.”

The senior’s stat line against the Lancers wasn’t eye-popping: No points, three assists and six rebounds in 13 foul-plagued minutes. But the senior fulfilled his role backing up starting center John Hayward-Mayhew and defended the biggest opposing body, center Luke Evans. Defense is most of what CSUN head coach Bobby Braswell looks for in his players.

“(Feldman) is going to play a lot for us this year,” Braswell said. “He was a little nervous. He had (four) fouls.”

The path taken by Feldman to get back on the Matadome’s floor was an unusual one. He was recruited out of Santa Monica High School by the CSUN volleyball team in 2008, a year in which he redshirted. Shoulder problems required him to have surgery during that offseason, but he came back the following year ready to contribute.

The middle blocker appeared in three games for the Matadors in 2009 as CSUN rolled through a 24-7 season that ended in the Mountain Pacific Sports Federation playoffs. The following season, limited again by the pain in his right shoulder, he only played one game as CSUN made it all the way to the Final Four.

After that, Feldman decided to call it quits.

“I tried to play through the pain, but I couldn’t,” Feldman said. “And eventually it just wasn’t worth it anymore, so I talked to (CSUN men’s volleyball head coach Jeff Campbell) and had to leave the team.”

The red-haired center didn’t spend too much time lamenting his volleyball misfortunes, however. As soon as he left, Feldman started his preparation to make another comeback. This time, he had basketball – a sport he also played while at SMHS – on his mind.

Feldman started his basketball workouts late last year. He then e-mailed Braswell this summer asking for a tryout. Braswell, who had just lost an unnamed big man after the player decided to stay close to home instead of joining the Matadors, told Feldman he was in. No tryout needed.

“We lost that (player) and (Feldman’s) e-mail came the very next day,” Braswell said. “We needed the body. The timing was great. It worked out great for us.”

And as long as Feldman doesn’t have to swat down a ball too hard, his shoulder should be fine, he said.

“When I play basketball, it doesn’t bother my shoulder at all,” Feldman said. “It was just the volleyball swing. That’s the thing that hurt my shoulder.”

With volleyballs and shoulders a thing of the past, Feldman’s first true test will come Friday against USC. Asking the 6-foot-9 and 220-pound Feldman to guard 7-foot-1, 260-pound center James Blasczyk is not exactly easing him into the position, but Feldman knows the teams needs him to adjust as quickly as possible.

“I don’t have a transition year,” Feldman said. “I have to transition right now before the season starts. It’s a little added extra pressure.”

After his first home game against Cal Baptist, Feldman said he felt he was in the right shape to help the Matadors be successful. On the road against the Trojans, the lights will shine just a little brighter. He only has one concern regarding that.

“Hopefully I won’t be in as much foul trouble (against USC),” Feldman said.

That was something he didn’t have to worry about in volleyball. He’s trying to adjust.