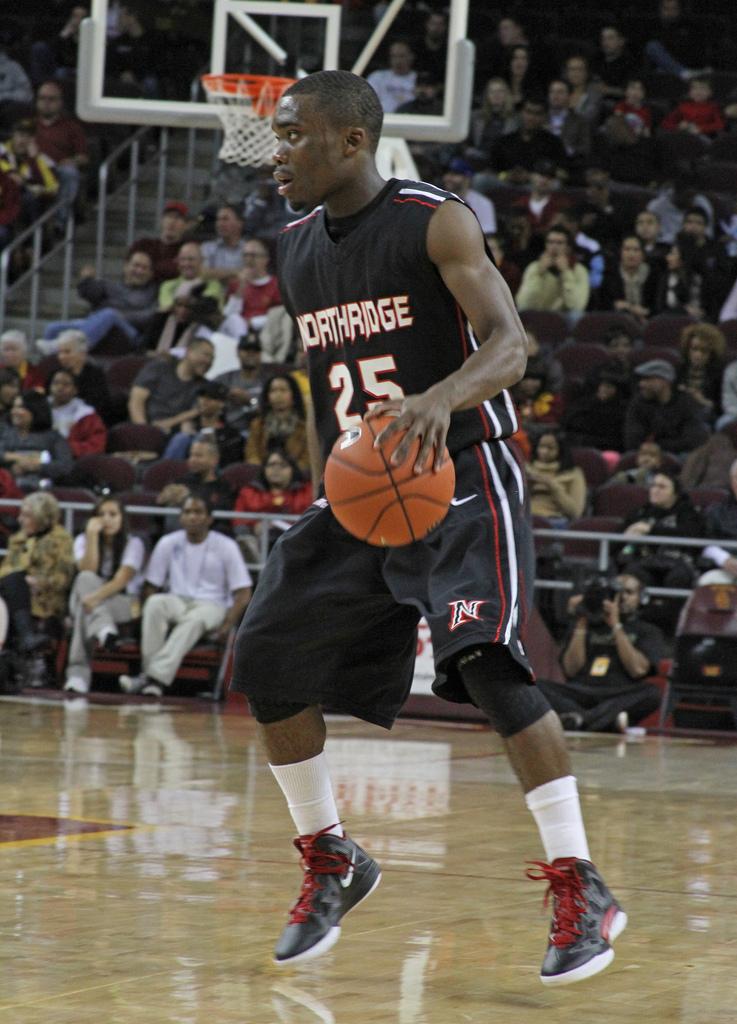 Following an and-one layup from CSUN freshman guard Allan Guei that tied the game at 42-42 with 10:56 to go in the second half Friday, the USC home crowd finally woke up.

For the first time all night, they began to boo the Matadors.

Former USC baller and now NBA player DeMar DeRozan, who attended the game, didn’t take part in the boo fest, however, according to Guei.

“(DeRozan) told me he was going to come show me some support,” said Guei, who scored 14 points in his first official Division-I game. “I’m glad he came out.”

So DeRozan wasn’t rooting for his alma mater?

For a moment there, it looked like CSUN would pull off the stunner and shock USC despite only shooting 13.8 percent in the first half.  The Matadors went up by four after a layup by guard Stephan Hicks with 4:49 left in the game.

USC, however, showed more poise than CSUN in the final minute and scored the game’s last five points to eek out a 66-59 win.

“I just feel like we beat ourselves,” Guei said. “We had the chance at the end. We just didn’t execute at the end what the coaches wanted us to do.

While the game ended in defeat for CSUN, it was by no means a disgraceful first outing for the Matadors. Guei only shot 5-of-14 from the field and fouled out with 2:16 to go in the game, but there was a good chance DeRozan and the rest of his supporters were content with the freshman’s debut at the Division-I level.

“It was just a beautiful thing,” Guei said of his first regular season game. “It was a blessing from above.”

CSUN starting point guard out: Guei was an unexpected starter against the Trojans. Not because he’s not starting material, but because his presence meant someone vital from the CSUN starting lineup was missing.

That was Aqeel Quinn, the Matadors’ starting point guard, who suffered a quad injury during practice Thursday.

The Matadors only had two assists against the Trojans for the game.

“Having him on the floor gives us a bigger point guard. It changed our rotations tonight.”

Quinn, who scored 15 points in an exhibition game vs. Cal Baptist Saturday, will probably be out for at least one more game, Braswell said.

“Right now it’s a day-to-day thing. It doesn’t look good,” he said. “He’s probably doubtful for Hawaii on Monday night. And it’s just a matter of him getting healthy.”

Big men don’t score too much: CSUN has a guard-oriented offense. That’s clear. Three of their guards amounted for 47 of the Matadors’ 59 total points Friday night.

Their big men didn’t shine against USC’s bigger lineup. Their function was to free up the shooters, CSUN forward Ari Feldman said.

“I’m trying to execute the offense, set a good screen,” Feldman said. “If I get the ball back and I have an open shot, I’ll take it.”

He was concentrating on defense first.

“I wasn’t going to force it (offensively),” Feldman said.