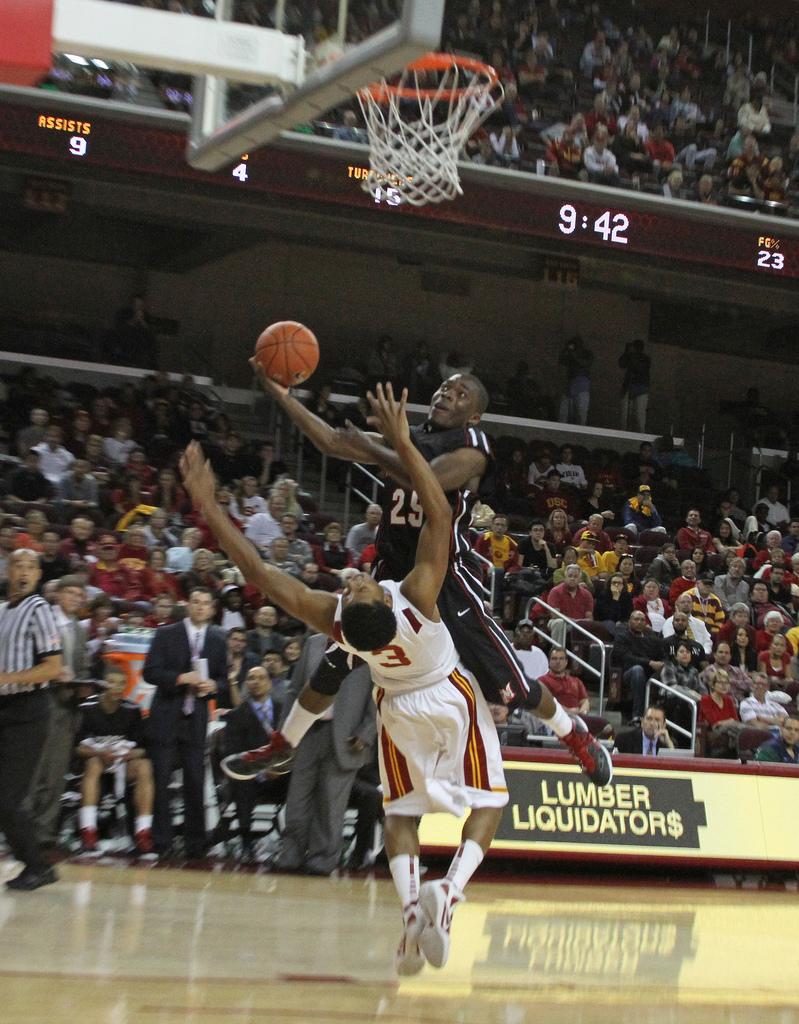 Gilberto Manzano
The crowd at the Galen Center seemed uninterested as if the Trojans were up by 30 points over the Matadors Friday night.The USC big men had no problem scoring against the undersized CSUN defenders, and explosive point guard Maurice Jones was weaving his way to the basket and getting to the free throw line with ease.Despite all that, the Matadors wouldn’t go away, and Vinnie McGhee’s hot shooting had Northridge thinking upset.

With the Trojans holding on to a three-point lead and only 43 seconds left in regulation, McGhee had the ball and made up his mind that he was going for the tie.

“I was thinking three the whole time,” he said.

But the three-point shot never came as the Matadors fell to the Trojans 66-59 in the season opener for both teams.

McGhee wasn’t lying about the 3-pointer, he just decided he wasn’t going to take it. The senior instead opted to pass to freshman Stephan Hicks in the corner. But Hicks ended up getting trapped by two USC defenders and almost had the ball stolen from him before eventually forcing up a bad shot.

“They started hedging me when I was coming off the screens,” said McGhee, who scored 14 points on the night. “I saw my teammates open, so I just gave them the ball because they were wide open and I felt it was a better play.

“I didn’t want to force anything.”

McGhee’s choice to go with Hicks wasn’t a bad one since the redshirt freshman had a game-high 19 points.

“(Hicks) was playing hard the whole game, so I can’t fault him for that,” McGhee said.

The play of Hicks and fellow freshman Allen Guei, who scored 14 points in his Matador debut,  kept CSUN (0-1) within striking distance of USC (1-0). The Matadors overcame a 10-point second-half deficit and tied the game at 42-all midway though the second half. Guei provided the spark with seven consecutive points during the CSUN run.

From then on, Jones, who was kept quiet for most of the second half, turned up his speed and got to the free throw line to give USC a 49-44 advantage with 6:36 left.

McGhee then started his hot shooting and knocked down three consecutive baskets, two of which were 3-pointers. McGhee’s third bucket was the one that put CSUN ahead by two points. Hicks’ consequent layup with 4:49 left in the game increased the lead to 54-50, the biggest advantage of the night for CSUN.

“(CSUN head coach Bobby Braswell) had challenged me right before I made those three shots,“ McGhee said. “He knows I’m a shooter and told me to keep shooting until I make it when I came off the screens.”

CSUN had an opportunity to go up six, but freshman Davon Potts missed an easy breakaway layup.

“Potts missed a layup,” Braswell said of the play. “You know, he’s a freshman guy in a big situation.”

However, CSUN pulled within two and had possession with 1:10 left on the clock, but the Matadors again didn’t execute and only managed a desperate 3-pointer from forward John Hayward-Mayhew.

The Matadors had trouble against the Trojan bigs and were outscored 30 to 14 in points in the paint. CSUN was also outrebounded 46-35.

Jones, who made 12 of 15 free throw attempts, scored 16 points. Dedmon also had 16 points on 7-of-8 shooting to go with his eight rebounds.

CSUN shot a cold 25 percent from the field (16-of-64), but USC helped keep the score close with its horrid three-point shooting (0-for-15) and its 20 turnovers.

The Matadors missed 19 of their first 20 field goal attempts and trailed by as many as 13 points in the first half.

“As poorly as we shot in the first half, I just felt that if we kept defending and made a couple baskets, we would give ourselves a better chance,” Braswell said.

CSUN will try to regroup with a long flight to Honolulu to take on Hawai’i Tuesday morning in a game that will be televised on ESPN starting at 1 a.m. The game is part of ESPN’s Tip-off Marathon.