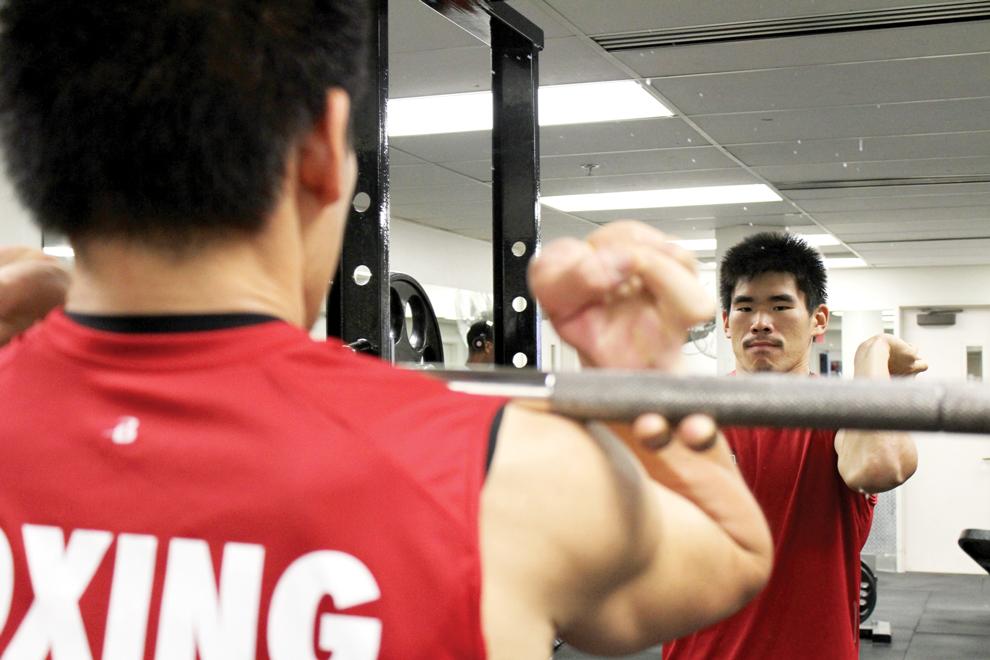 Though college is usually a time to go out, meet new people, and find yourself, for one student, college was about changing his whole life.

Someone who takes one look at the Fitness Center’s boxing instructor, might doubt that he was at one time obese, out of shape, and an unhealthy eater, but that was the case for Andrew Shibata.

The now-muscular and slim kinesiology major had grown up overweight and didn’t decide to change his lifestyle until coming to CSUN.

Before that, Shibata went to school at University of Washington for two years where he was part of a fraternity where a private cook catered to them. At this time his weight went from 180 pounds to 257.

“She was great,” he said. “She was all of our moms while we were there. She didn’t mind using a stick of butter if she had to, she just made whatever, so I just ate whatever they had.”

Shibata said being away from home where his family ate healthy, low-fat foods, and becoming independent were contributors to his weight gain during that time.  While being on his own, he didn’t work out and would often find himself running out for fast food or snacking on a late night meal while up studying.

Shibata’s brother convinced him to start working out with him. Keeping up with his brother was part of his motivation.  Once he started seeing the weight fall off, he continued to do it, though he said it wasn’t always easy.

“I went from eating 3,000 calories a day down to maybe 1,500 calories and eating healthy, smaller meals than usual,” he said.

The first thing he cut out was soda and fast food, which is something many nutritionists suggest, including Natalie Stein, who holds a master of science in nutrition.

“Fast foods, such as pizza, chicken sandwiches, burgers, burritos and tacos, are among the top sources of calories in the average American diet, according to the 2010 Dietary Guidelines from the U.S. Department of Health and Human Services,” she wrote on the LiveStrong website.

According to the FitDay website, soda, especially diet soda, can actually make someone feel hungrier due to the chemicals in artificial sweeteners.

Though it took a year and a half to two years to drop 102 pounds, he says he is now much more fit and healthy than two years ago.

Shibata works as a boxing instructor at the CSUN Fitness Center and is a part of the kinesiology department on campus as an athletic training major.

“It’s basically everything I love, working out, helping athletes to become better, to realizing you have something wrong that you could fix,” he said. If you don’t feel like you are working out the right way, remember that there is no one way to exercise and you have options, he added.

“Mentally and motivationally, just stick with it. Once you hit a plateau, which a lot of people do hit a plateau when they work out, that’s when people get disheartened,” he said. “You just gotta change it up a little bit. Everybody’s different.”

There is a theory, Shibata said, that when your body hits a certain weight, it becomes comfortable and finds a security netting there and doesn’t want to change. It will do everything it can to stop you from losing weight, especially if you lose it too quickly. However, once the body starts losing weight and realizes it’s not in danger it becomes easier and easier, he said.

“Losing weight takes time,” Shibata said. “There is no magic pill or exercise machine that’s going to do the work for (you). You have to put in the hard work and dedication to get the results you want.”

It’s going to hurt sometimes and it can get very frustrating, but nothing in life worth having comes easy.”