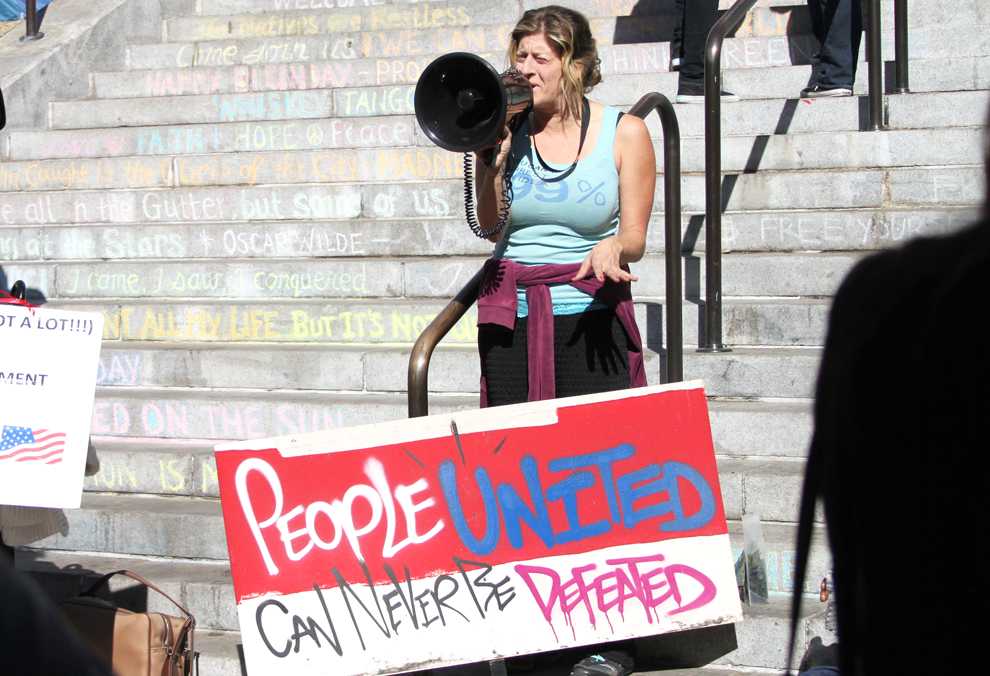 College students have risen in solidarity across Southern California and joined the Occupy movement, albeit in small numbers.

Howland lives on campus, but has taken up a temporary home outside City Hall at the Occupy LA encampment.

She sleeps in a tent on the lawn, wakes up every morning at 6:30 a.m. to drive to school, and comes back in the early evening to protest with fellow Occupiers.

She starts homework around 11 p.m., goes to sleep and repeats the routine.

“It’s the most exciting thing I’ve ever been a part of for a very long time,” she said. “To have the youth and the American public finally waking up and rejecting the system that’s been forced on us, it’s amazing.”

Ankur Patel, a CSUN graduate student, said this is a time for students to be more aware of their world.

Occupy CSUN has gathered an average of about 50 students to its weekly rallies, according to student organizer James Ackerman. Those numbers are more than what USC or UCLA have had for their movements.

Howland said 40 students showed up for USC’s first campus rally in late October, but the numbers decreased to about a handful the second week. There aren’t any more currently scheduled.

“People got sidetracked with school and with their lives, I guess,” she said.

The Daily Bruin reported UCLA’s Occupy movement has been slow to take off.  Still, students members of Occupy UCLA participated in a rally that included 200 protesters against tuition hikes on Wilshire Boulevard last Wednesday, resulting in 11 arrests.

Authorities have had to act up north as well.

On Nov. 9 At UC Berkeley, police in riot gear moved in when protesters refused to leave the encampment they had set up on campus. According to the school’s student paper, 39 people were arrested in a demonstration that was reportedly in the hundreds.

According to Girgenti, about 100 participants showed at Occidental up for the Nov. 2 National Solidarity Teach-in — a protest for campuses nationwide that brought students and professors together in an open-ended discussion about their school’s issues.

The website occupycolleges.org had 87 schools registered in the U.S. for the teach-in, including 12 in California, and had guidelines on how to handle to event.

Girgenti cited the financial crisis of 2008 as a reason for any student to take notice.

“(That crisis) has made tons of students’ middle-class living standards very precarious,” he said.

The question now is where to go from here. USC and UCLA are not fully mobilized for the time being, and the main hub for students still seems to be downtown LA.

“It’s easier for us to organize off-campus,” Girgenti said.

Patel said different factors play a role in whether certain rallies or marches can be successful for students.

An LA Times article last month quoted Mayor Antonio Villaraigosa as saying the protest at City Hall “cannot continue indefinitely,” and he has told city officials to draft a plan to find a new place for the demonstration.

Rosen said he feared the long-term status of Occupy LA could be up in the air, so his goal is to further strengthen the campus protests.

“There’s a lot of risk that they’re going to get shut down,” Rosen said. “There are a lot of weekly meetings on all the campuses. It might take the movement in a different direction.”

“No one ever knows how movements are going to end up,” he said.