M-Bball: Rainbow Warriors’ rain of threes too much for Matadors 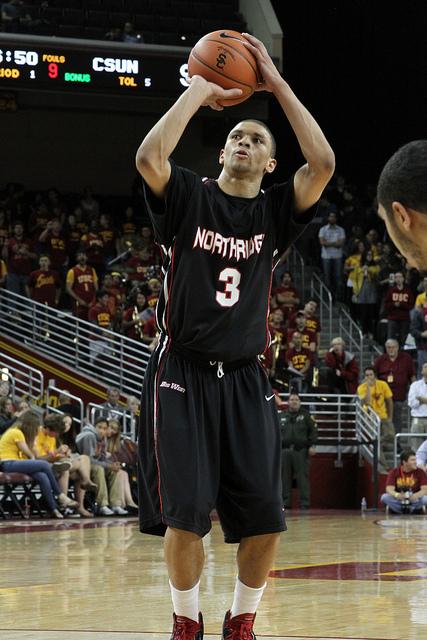 The 3-pointer-happy Rainbow Warriors (1-0) left an impression enduring enough for the Matadors (0-2) to take into next season when Hawai’i will join them in the Big West Conference.

Hawai’i, who will join the Big West starting the 2012-13 season, hit the Matadors with three quick 3-pointers to start the second half and turned a tight affair into an 86-67 runaway victory Tuesday morning at the Stan Sheriff Center.

The long-distance baskets –two of them from guard Shaquille Stokes – ignited an 11-2 run that turned a 37-34 Hawai’i lead into a 48-36 one with less than three minutes gone in the second half. The Matadors didn’t get within single digits the rest of the way and the Warrior advantage ballooned up to as much as 25.

CSUN guard Stephan Hicks had another superb outing with 22 points and 17 rebounds, but it was all for naught as the Matadors once again shot poorly from the field (22 of 71). Guards Vinnie McGhee and Josh Greene combined to shoot 3-for-21.

The Warriors, on their part, had five more field goals than CSUN despite taking 14 shots less. Hawai’i was 27 of 57 from the field, including 10 of 27 from three-point range.

Guard Zane Johnson did most of the damage from deep for Hawai’i, Johnson made six of his 13 three attempts and led all scorers with 24 points. Forward Trevor Wiseman helped Johnson carry the offensive load and had a double-double with 19 points and 16 rebounds.

The Matadors started the game with shades from their season opener at USC in which they missed 19 of their first 20 shots. Against the Warriors, they misfired on their first five attempts, but settled down far quicker and hit eight of their next 15 shots to take a 20-13 lead with 9:23 to go.

From then on, Johnson and Wiseman took it upon themselves to give Hawai’i back control. The two combined for 15 points during a 19-3 run that put the Warriors up 32-23 with 3:55 to go in the half.

Northridge, which got a solid effort from reserve forward Ari Feldman with his 10 points on 5-of-9 shooting, cut the lead to two with 53 seconds to go in the first half. That’s as close as it got the rest of the night.

After they fell behind by 25 in the second half, the Matadors had an 11-o run to cut Hawai’i’s lead to 70-56 with 5:23 to go. The Warriors responded with a basket shortly after to repel the threat.

The Matadors will stay on the road for one more game, against Boise State on Saturday, before hosting San Diego Christian on their home opener Tuesday.