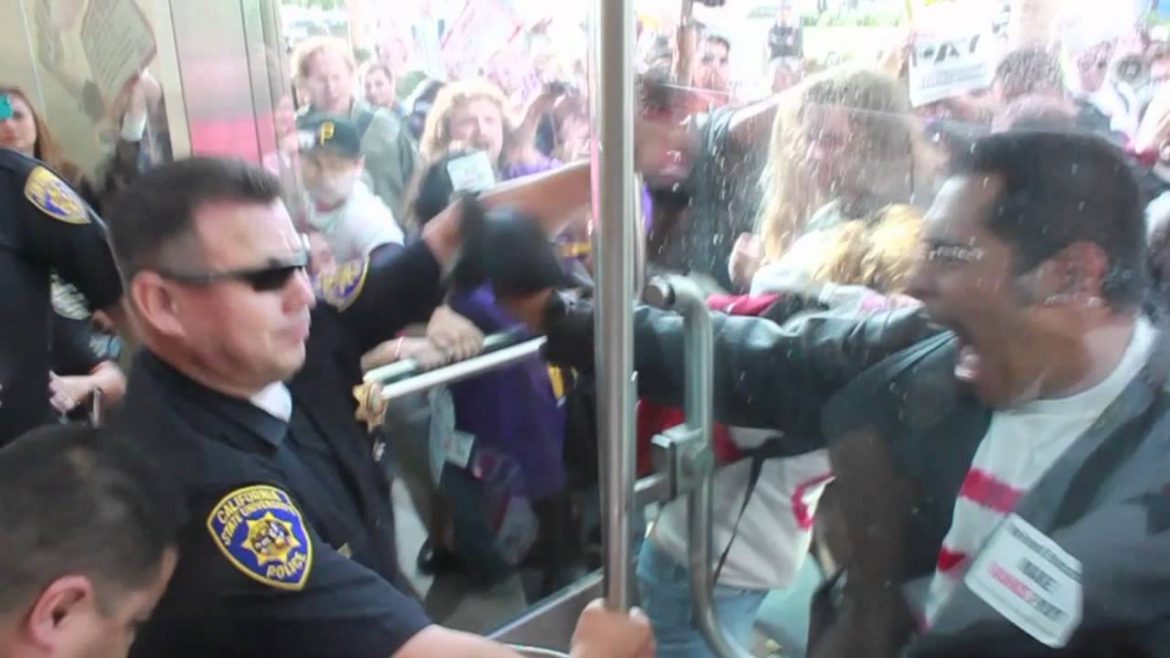 CSU board of trustees voted to increase Fall 2012 tuition 9 percent while protesters turned violent outside after being removed from the Chancellor’s Office Wednesday.

Trustees voted 9 to 6 to raise full-time undergraduate tuition by $498 a year, bringing the total annual cost to $5,970.

“(It’s) time to tell the legislature this is what we need to operate this system, and if they’re not going to act then we have to show the leadership and make those tough, hard decisions,” board member Bob Linscheid said. “I hate like heck to make that decision, but I will.”

Chancellor Charles Reed told the board that a vote on tuition needed to be made as soon as possible to give prospective and current students plenty of notice of the fee increase.

“The timing of the (state) legislature is not congruent with the timing that the decisions that we have to make about the academic year,” Reed said. “We wanted to provide students and parents with as much notice as possible that tuition will go up in the fall.”

Lt. Gov. Gavin Newsom, also a board of trustee member, said the board needed to end their trend of raising tuition if they ever expected to receive more state aid.

“We’re a record with grooves and we need to scratch that record,” Newson told the board. “You did a very good job today trying to justify a bad decision.”

Just outside the doors where the vote was taking place, several protesters with ReFund California Coalition clashed with police after being removed from the meeting for continuously disrupting board members.

The board also voted to approve its 2012-13 budget, which pressures the governor and legislature to provide $333 million in additional funding to cover all of CSU’s essential costs, including more classes, student services and faculty and staff health care, according to a statement from the CSU.

Once outside, protesters demanded to come back in, chanting “Whose university? Our university!”

When CSU police tried to close the doors on the protesters from the inside of the building, a struggle ensued.

Demonstrators who actively tried to regain entry to the Chancellor’s Office were pepper sprayed and pushed out of the doorway by CSU police. When police regained control of the door, the scene calmed down.

Shortly after the three protesters were taken away by police, the glass front door was shattered.

Protesters outside backed away from the scene when the door shattered, marking the end of the chaotic scene.

A total of four people were arrested during the violent confrontation, including two students from San Diego State University and one student from CSU Long Beach, CSU spokesperson Erik Fallis said. Their charges have not been named.

First Report: LONG BEACH –CSU Board of Trustees voted 9 to 6 behind closed doors to increase tuition by 9 percent for Fall 2012 in a meeting marked by violence and arrests.

Three people were arrested when a group of protesters shattered the glass front door to the Chancellor’s Office after being forced out of a Board of Trustees meeting Wednesday.

Board chair Herbert Carter suspended the meeting after protesters became disruptive when not everyone was allowed to speak during the public comment section of the meeting.

California State University Police were brought in to escort the protesters out of the building. Some protesters refused to leave as police resorted to pushing them out and guarding the line.

The situation escalated when protesters continued to press forward after police told them to move back from the door.

Police coordinated an effort to pull the doors closed but protesters resisted, leading to several of them being pepper-sprayed.