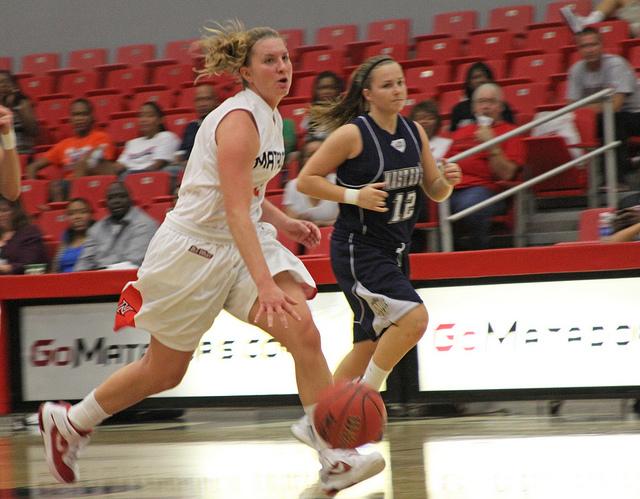 Led by freshman guard Janae Sharpe’s perfect shooting first half, the Matadors were up 35-25 at halftime as their defense forced 15 turnovers and held Washington to 27 percent shooting.

But their second half defense allowed 48 points on 50 percent shooting as CSUN lost its second game in a row to the Huskies 73-67 in a tightly called turnover-fest Saturday evening at the Hec Edmundson Pavilion.

“Plain and simple, we didn’t get stops,” said head coach Jason Flowers. “In the first half, we made them take tough, contested shots, but they were able to get to the rim and make open threes in the second half.”

Both teams combined for 54 turnovers and 48 fouls, but CSUN’s (2-2) mistakes turned out to be more costly as the Huskies (3-1) capitalized on the 26 foul calls in their favor by hitting 25 of 30 free throws compared to Northridge’s 16 of 22. Washington also took advantage of the 29 Matador turnovers, outscoring CSUN 20-15 off second chance opportunities.

“In the second half, we started to overthink things,” Flowers said. “Anytime we deviate from making the easy play, bad things like turnovers happen.”

“We also need to do a better job of keeping the other team off the free throw line,” he added. “It’s on us — we need to adapt to the way the game’s being called and go from there.”

As good as Sharpe’s first half was, she only put in two points on 1 of 3 shooting in the second period. Senior center Jasmine Erving’s double-double of 21 points and 10 rebounds kept the Matadors alive as they tried to hold off the Huskies’ furious charge.

“(Sharpe) was active in the first half,” Flowers said. “But defensively, she went for a loose ball and came up limping afterwards.”

Freshman guard Ashlee Guay had a solid outing — she finished with seven points, seven rebounds and seven steals, bringing her total amount of steals for the season up to 20.

“Guay is scrappy and feisty,” Flowers said. “She plays extremely hard without fear, and she did a great job of clogging up the passing lanes. She’s had really good results to start the season.”

Washington trailed the majority of the second half, but they quickly cut the lead to four when freshman guard Jazmine Davis hit a 3-pointer with 15:09 left in the game. Soon after, the Huskies earned their first lead and never looked back when Davis split a pair of free throws at the 11 minute mark. Davis finished with 12 points on 3 of 10 shooting from the field.

Redshirt senior center Regina Rogers and sophomore guard Mercedes Wetmore both added 17 points for Washington, 15 of Wetmore’s points came in the second half.

CSUN’s biggest advantage came about midway through the first half when it was up 21-6. The lead dwindled due to a 9-0 run, where the Huskies made five free throws and two jumpers in the span of five minutes.

“We didn’t guard our man like the coaches told us to,” said junior forward Jianni Jackson. “We were scrambling, and it caused us to foul a lot.”

CSUN’s previous loss was at Oregon State, where they were smothered by the Beavers’ zone defense. The Matadors lost the game 83-63 and shot 36.1 percent.